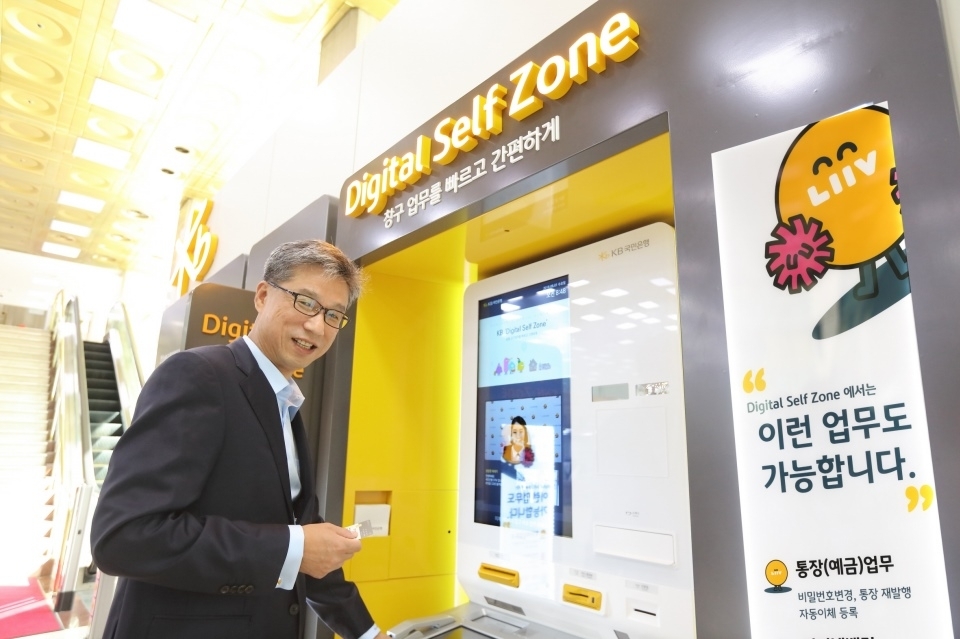 KB Kookmin Bank CEO Hur Yin poses in front of a smart teller machine in 2018 (KB Kookmin Bank)
South Korean banks are going through their biggest transformation since the postwar era in the face of rising online banks and the fast-changing consumer trend favoring non-contact services.

With the growing preference for “untact” -- non-face-to-face contact -- the lenders have been closing many brick-and-mortar branches, while giving more authority to chief digital officers who were hired from outside.

The combined number of physical branches of all commercial banks here stood at 6,658 in the first quarter of the year, down by 56 on-quarter and 85 on-year, recent data by the Korea Federation of Banks showed. The KFB is an association representing around 60 banks operating in Korea, including branches and subsidiaries of foreign lenders.

The shutdown of their branches is projected to rise further this year, with four major commercial banks -- Shinhan, KB Kookmin, Hana and Woori -- having already announced they will shutter a combined 24 more locations in July alone.

For the remaining branches, the lenders have adopted digitalized ways to cut back the transaction between employees and customers, including installing tablet computers to reduce exchange of paper documents and money.

STMs are currently available in more than 100 of KB Kookmin’s regular branches as well.

As of end-2019, Woori operated a total of 46 SMTs, while Shinhan had 22 such machines, according to separate KFB data released earlier this year.

To improve management of new digital devices and bring about safe digitalization of businesses, banks have been focusing on either hiring or giving more control to chief digital officers.

The CDOs are expected to get behind the wheel to create a virtuous relationship with the government’s Digital New Deal -– an initiative announced in early June intended to expand Korea’s digital economy for the post-virus era.

NH NongHyup is taking an unprecedented step to seek an external expert for its CDO position, sources close to the matter said last week. If the hiring process is completed, it would mark the first time that the banking group will hire an outside expert for the position that was created in 2018.

The group plans to expand its digital finance business as well, by launching a data business team of around 40 members early next month.

As reflected in NH NongHyup’s decision, Korean lenders are still conservative in hiring outside experts for their key leadership positions. But all the major groups now have outside experts as their CDOs.

All four major banks have so far given CDOs or IT-related teams, the authority to handle their personnel matters and budgets.