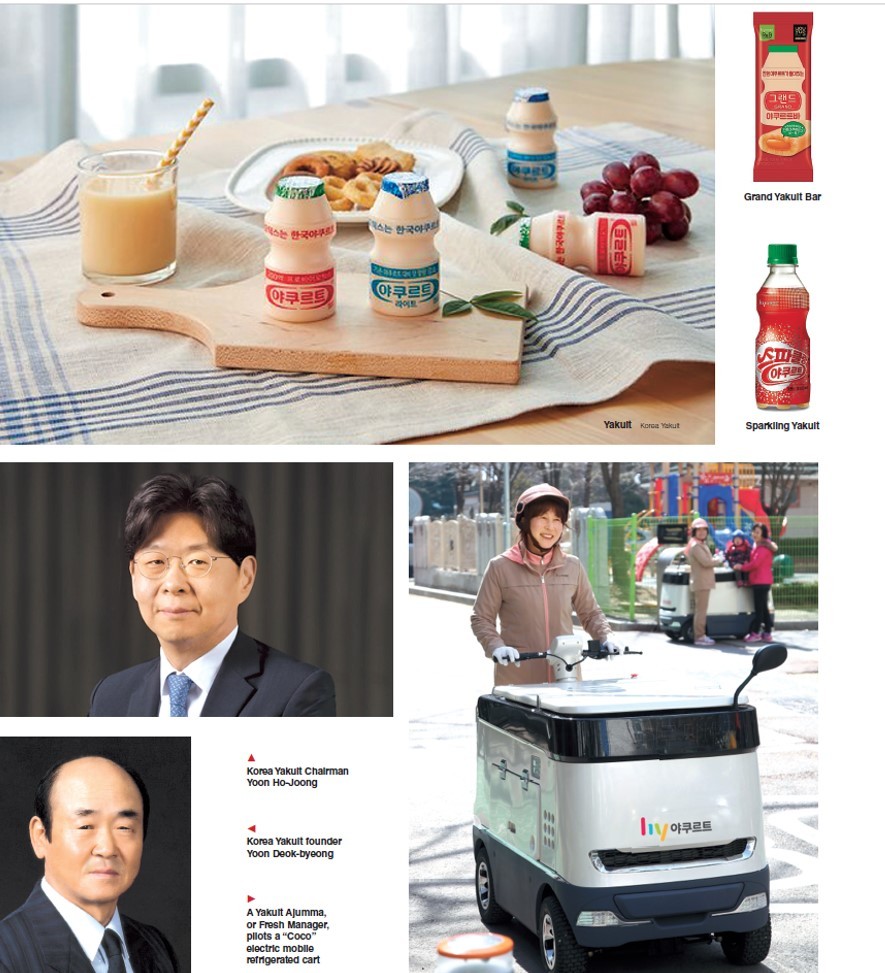 Yakult, a sweet probiotic drink in a tiny pale peach bottle, has been Koreans’ favorite beverage for more than 40 years, even creating its own culture through “Yakult ajumma.”

While it sounds similar to yogurt and also contains lots of probiotics -- as much as around 20 billion lactic acid bacteria per bottle -- yogurt and Yakult are different products.

Yakult originates from Japan, referring to a drink brand made of skim milk powder that contains probiotic culture with sugar added. The name Yakult derives from a Japanese pronunciation of “jahurto,” which means yogurt in Esperanto.

Yakult was actually the first fermented milk to be launched in Korea in 1971.

In the 1960s, milk production increased significantly in Korea due to the government’s livestock promotion policy. Wasted raw milk also surged due to a lack of production processing capacity.

In November 1969, the late Yoon Deok-byeong established Korea Yakult in a technology partnership with Japanese brand Yakult Honsha in the form of a joint venture with 61.7 percent held by the firm in Korea, 38.3 percent by Japan. It introduced lactobacillus fermentation technology from Japan on the condition that it pays 3.5 percent royalties on sales for three years.

Yoon, who passed away in June, 2019, is considered a pioneer in the industry here, developing the once-unfamiliar product into a popular health drink.

He established a research institute in 1976 for the first time in the Korean food industry. Twenty years later, the institute has developed its own lactobacillus, opening the era of lactobacillus localization.

Yoon also formed the volunteer organization “Love Hand-up Meeting” in 1975 to spread the importance of sharing. The organization continues to operate, funded by 1 percent of employees’ monthly salaries. Its 17 regional committees across the country visit underprivileged people in the community every month to carry out volunteer work in connection with local governments.

After Yoon passed away, his son, Vice Chairman Ho-joong, 50, took the post of chairman in March.

The new leader graduated from Keio University in 1995 and joined Korea Yakult in the same year. He currently owns 100 percent of instant noodle brand Paldo, a holding firm that has a 40.83 percent stake of Korea Yakult.

Public opinion in the early years of selling Yakult was not favorable.

Because the concept of lactobacillus was unfamiliar to most, Yakult was even criticized for selling germs.

It was also subject to a goods tax, equivalent to the current special consumption tax, because Yakult needed a refrigerator, which was a major luxury item in the early 1970s.

In 1977, six years after its launch, daily sales exceeded 1 million bottles, establishing Yakult as a “national beverage.” So far, it has sold an accumulated 50 billion bottles here, the largest figure for a single beverage brand.

With the popularity of Yakult, the company has launched different variants -- a less sugary version, a sparkling one and an ice-bar type product.

Yakult Light, which contains less than half the amount of sugar, was launched in 2014. Frozen Yakult was also released two years later. Designed in the shape of a bottle of Yakult upside down, the mouth of the bottle was widened to eliminate the inconvenience of eating frozen Yakult.

Last year, Korea Yakult released a new concept beverage called Sparkling Yakult, a carbonated drink with the refreshing feeling. The same year, Grand Yakult Bar was launched in the form of an ice bar aimed at the summer market that brought the flavor of Yakult to life.

Korea Yakult has recently diversified its product portfolio from companies specializing in fermented milk to milk, fruit and vegetable beverages and health functional foods. It launched cold brew coffee in 2016 and home meal replacement brand Eats On in 2017.

When talking about the remarkable success of Yakult, it is impossible not to mention “Yakult ajumma,”

The door-to-door sales system involving Yakult ajumma was introduced by the late Yoon to appeal to the public in a friendlier way, by hiring housewives.

Famous for their yellow jackets, hats and Yakult bags, the number of women working as Yakult salespeople has grown from 47 in 1971 to some 11,000 today, together forming one of the nation’s top sales organizations.

Most Korea Yakult products can be purchased through Yakult ajumma, who deliver the products door to door to individuals at their homes or offices.

Although the name of Yakult ajumma was changed to “Fresh Manager” last year, the original name is still more familiar to the public.

Sales also take place on the spot. If you install the Yakult app on your phone, you can track ajumma and buy products with a credit card on the spot.

Over time, the bags that the delivery ladies carry for products have continued to transform.

In the 1980s, they carried a handbag-like, portable lightweight ice box. A decade later, they began to pull carts to carry large quantities of Yakult.

In 2015, the cart evolved into the world’s first electric mobile refrigerated cart to enable ajumma on board. Coco -- the abbreviation stands for Cold & Cool -- is equipped with a 220-liter refrigerator and can speed up to 8 kilometers per hour.

More than 9,300 “Coco” units have now been distributed, selling more diverse products such as other beverages and ready-made meals.

Customer management for the delivery has also evolved smarter. An online integrated platform called “HyFresh” was built for customers to order products and get quick delivery.

In July 2017, Korea Yakult entered the food market under the Eats On brand and strengthened its position as a fresh service company. Eats On, which consists of meal kits, soup, stew, kimchi and side dishes, is delivered by ajumma every day upon subscription.

In collaboration with the delivery ladies, Korea Yakult is strengthening its social contribution activities.

Started in 1994 in partnership with the Gwangjin-gu Office in Seoul, the firm has been carrying out a project to provide care for elderly people who live alone, through which the ladies deliver Yakult to low-income seniors every day to check their general health and report any emergencies quickly. The project is now helping 30,000 elderly people in conjunction with 617 local governments across the country.

Although Yakult ajummas are at the forefront of business being responsible for 97 percent of the annual sales of 1 trillion won in Korea Yakult, they are also not well served by labor laws.

Despite being subordinated to the company, they do not receive benefits including the four major insurance policies, which are health, national pension, employment and industrial accident, alongside severance pay and annual leave.

Yakult, popular in Korea and Japan, has slowly begun to make its way into western regions. Most recently, it received wide attention after being featured in a popular Netflix film “To All the Boys I’ve Loved Before” as a drink that helps spark romance between the two main characters.

Thanks to fans who want to try the drinks in the movie, Yakult Honsha’s share price suddenly rose 2.6 percent.

But, the products are thought to be made from Japanese brand Yakult Honsha. Korea Yakult said it does not export Yakult on the grounds of tricky quarantine procedures and a short expiration date.