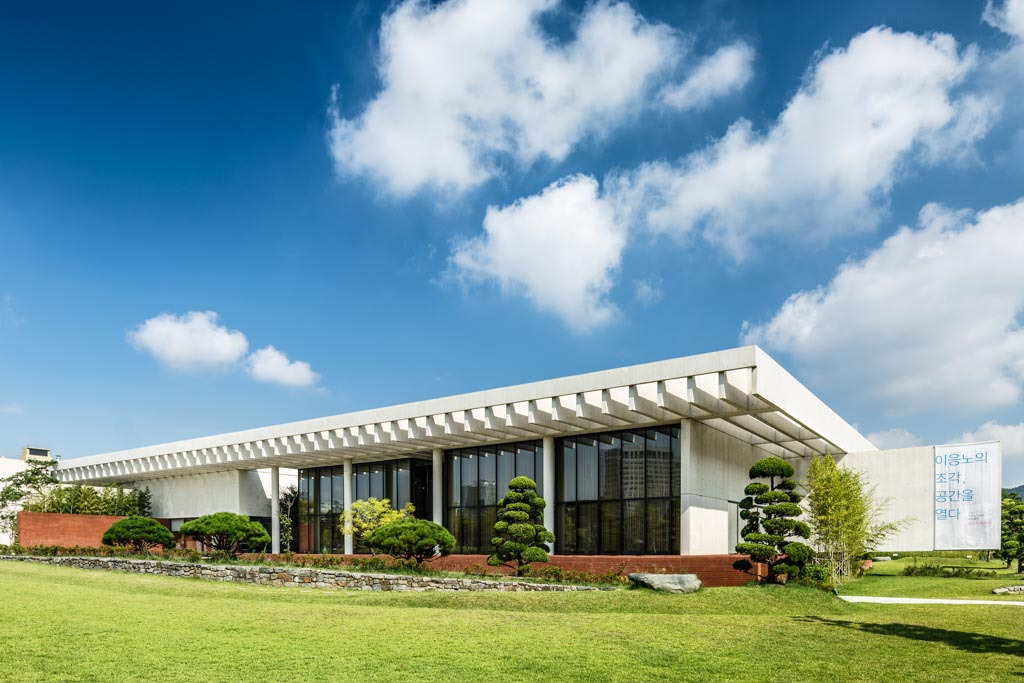 A view of the Lee Ungno Museum (Lee Ungno Museum)
The following is part of a series that explores museums dedicated to the well-known Korean contemporary artists that bear their name. --Ed.

When Western culture started to flood Korea in the early 1900s, many Korean artists faced a crucial question: how to apply Western art in their paintings without Korea’s painting tradition losing its cultural identity.

Born in 1904, Lee Ung-no was one of the artists who agonized over this question and successfully integrated the two different cultures in his art works.

In Daejeon, a two-hour drive from Seoul, is the Lee Ungno Museum, built in 2007 to commemorate Lee Ung-no and his contributions to Korean art as one of the country’s great modern painters.

The museum is hosting a special exhibition titled “Lee Ungno, Paintings Made From Paper,” which focuses on Lee’s artworks made with a variety of papers collected from magazines and newspapers, materials Lee used extensively. 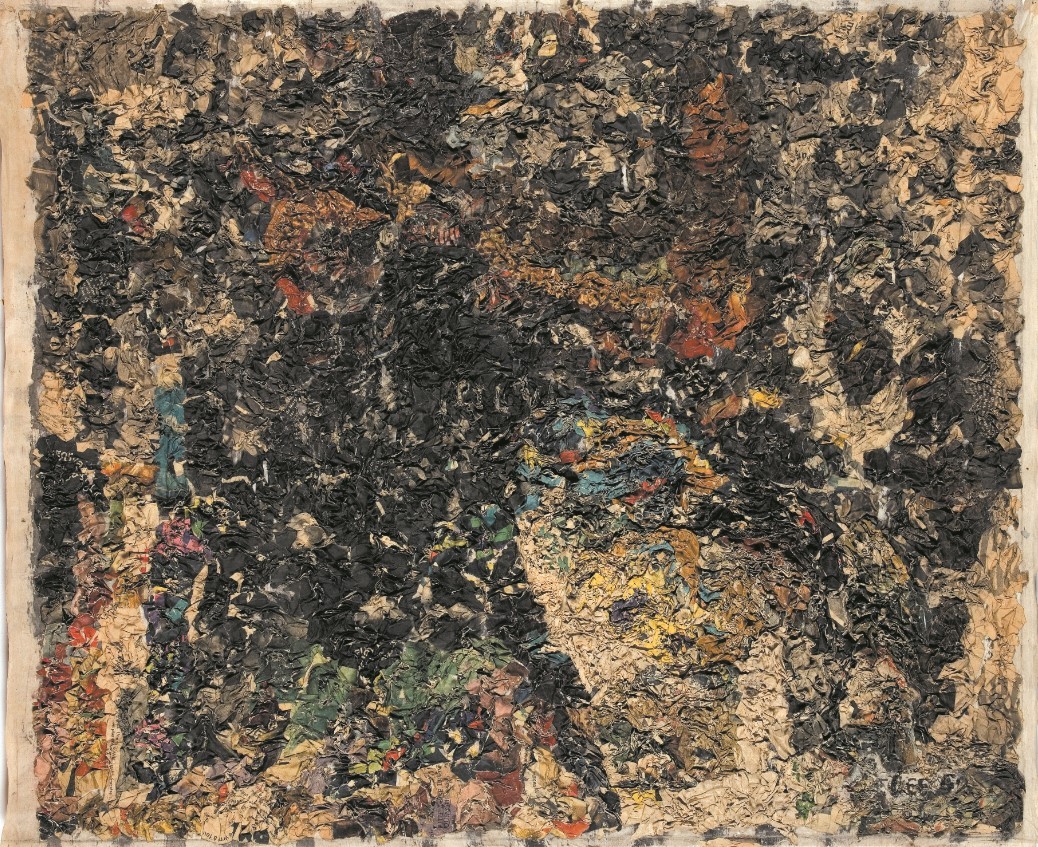 “Composition” by Lee Ung-no (Lee Ungno Museum)
His paper collages show a uniqueness that sets them apart from works from the West. Lee crumpled pieces of paper in different colors and pasted them onto a canvas. The physical texture of his works gives the impression of the weathered rocks that are easily found in Korean temples and royal palaces.

“Lee was an artist who frequently used paper, including “hanji” (traditional Korean paper), in his art. But he did not simply follow the European collage works that pasted papers flat on a canvas,” Ryu Chul-ha, director of the Lee Ungno Museum, told The Korea Herald on June 2 during an interview at the museum.

On view at the exhibition are notes from Lee’s wife, Park In-kyung, who is an honorary director of the museum, reminiscing about Lee. 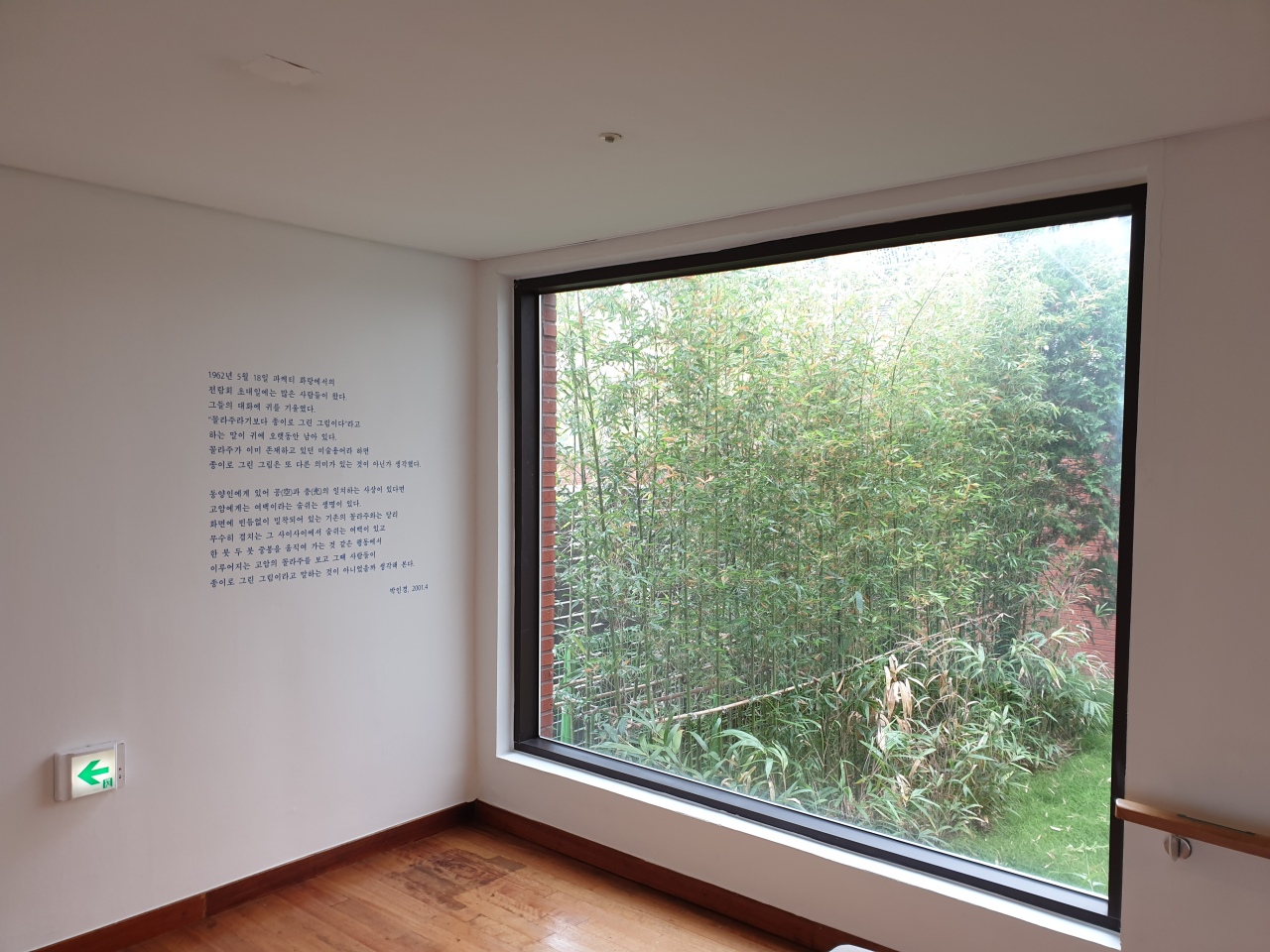 Notes from Park In-kyung, Lee Ung-no’s wife, reminiscing about Lee are on display at the Lee Ungno Museum. (Park Yuna/The Korea Herald)
One of the notes says: “The conversation between visitors at Lee’s exhibition held May 18, 1962, in France remains deep in my heart. They likened Lee’s works to ‘paintings with papers’ rather than collages. While the word collage already existed, a painting with papers is a different thing.”

Lee became a naturalized French citizen in 1983 and died in France in 1989. His family, including Park, still lives in France. Park visits the museum every year, but she has been unable to visit this year due to the COVID-19 situation, according to the museum.

Although Lee was a greatly gifted artist, he did not get the recognition he deserved from his home country due to political scandals.

Lee’s artistic talent was first recognized in 1924, during the Japanese colonial era, when he won the third Joseon Art Fair. After Korea’s liberation, the government established the National Art Competition, which later became tainted by the politics of the South Korean art world. In that world, Lee was a dissident artist.

In 1958, at 54, Lee left for France upon invitation by French art critic Jacques Lassaigne, who greatly appreciated Lee’s works, including his early abstract paintings created with India ink and light colors on hanji. Lee decided to leave Korea to expand his career as an international artist and also as an act of resistance against the hegemony of the National Art Competition.

In France, Lee was struck by the tradition known as “art informel,” the abstract art movement that was newly prevailing in Europe after World War II as a reaction to the horrors of war. This is when Lee began creating his unique collages, sometimes called “paintings made with papers.”

In 1962, he signed on with Galerie Paul Facchetti, a major art gallery in Paris that supported “art informel” artists, holding his first solo exhibition at the gallery. Titled “Lee Ungno: Collage,” the exhibition showed a series of abstract works created using collage techniques. Lee was acknowledged for creatively combining elements of Asian and Western art.

Lee also developed an abstract letter series that modernized calligraphy, giving abstract features to Chinese characters. “He was educated during the Joseon era, and learning Chinese characters was a huge part of his education,” Ryu of the Lee Ungno Museum said. 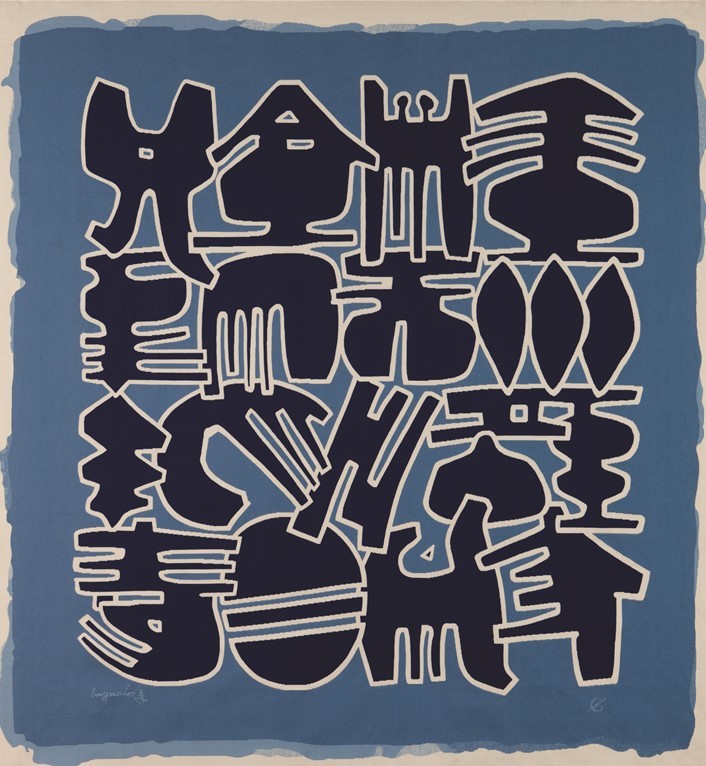 “Chestnut tree” by Lee Ung-no (Lee Ungno Museum)
While he was gaining recognition in Europe, he became embroiled in the 1976 “East Berlin Affair,” in which several South Korean artists in Europe were accused of spying for North Korea. He was extradited to South Korea and imprisoned for 2 1/2 years. In prison, Lee continued to create art, making more than 300 works using paper, rice paste and soy sauce in the belief that “an artist should be able to find artistic materials even from a trash can.”

Upon his release, Lee returned to France, where he began working on another series of masterpieces and continued to do so for 10 years until his death. In the “Gunsang” (“People”) series, Lee filled a large canvas with hundreds of people drawn with brushstrokes featuring dynamic movement, as if the people were crying out in fury or joy.

The “Gunsang” series came about after the Gwangju Democratic Uprising in 1980, when more than 200 citizens were killed and more than 3,000 wounded protesting the authoritarian regime in South Korea. When Lee heard the news in Paris, he deeply empathized with the victims due to his own experience of persecution by the government of his homeland.

Lee once wrote: “They (the protesters) will live forever in our blood and showed why artists such as poets and painters should do art. The movement changed the direction of my art … instead of living only for myself, I will jump into the crowd of citizens and will spend the rest of my life with them. I am transferring cries of the people onto my work every day.” 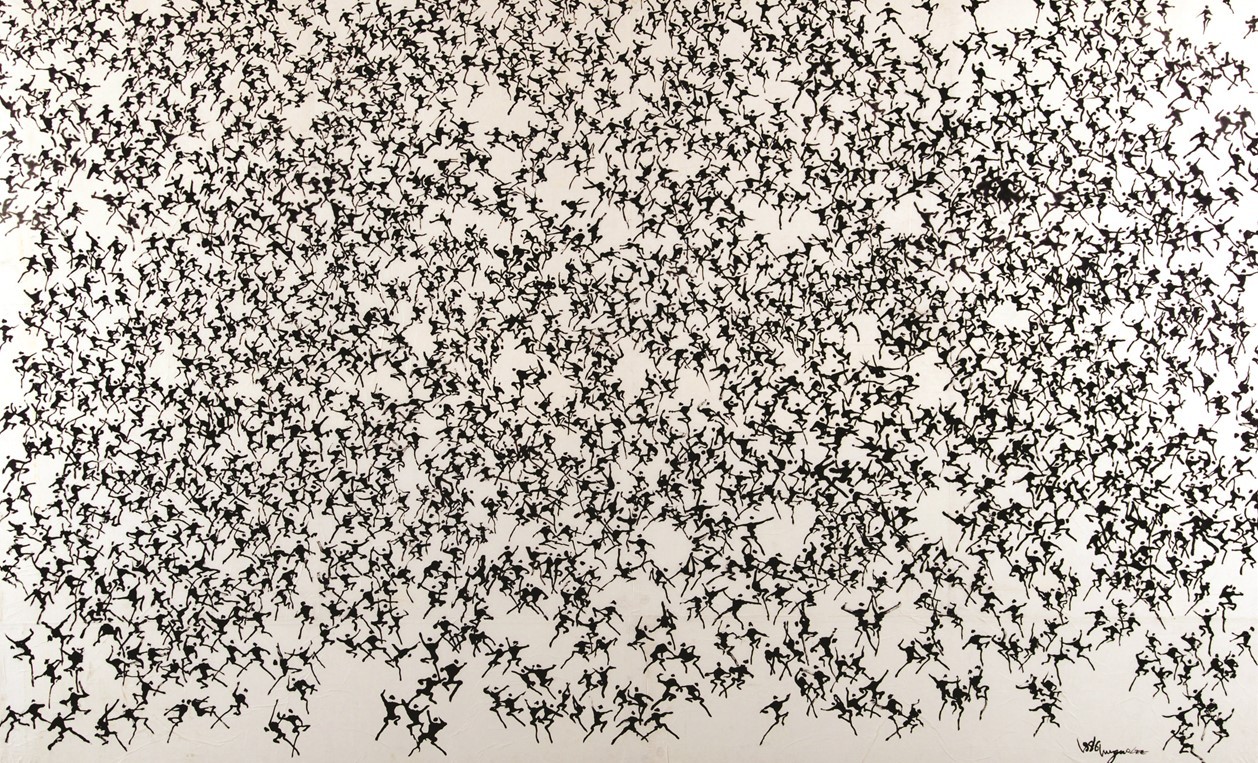 “People” by Lee Ung-no (Lee Ungno Museum)
Lee was not welcomed by the South Korean government when his retrospective was planned at the Hoam Art Gallery in January 1989. Lee remained in France without being able to attend the show opening. When the retrospective was unveiled to the public, Lee had a heart attack and died soon afterward.

“Art critics highly appreciate Lee Ung-no, while he is not widely known among the general public in Korea. He tried to seek his own art in the global context,” Ryu said. “We have many records on Lee, but a critical biography on Lee has not been made yet. Learning about and understanding his art is a task that still remains ahead.” 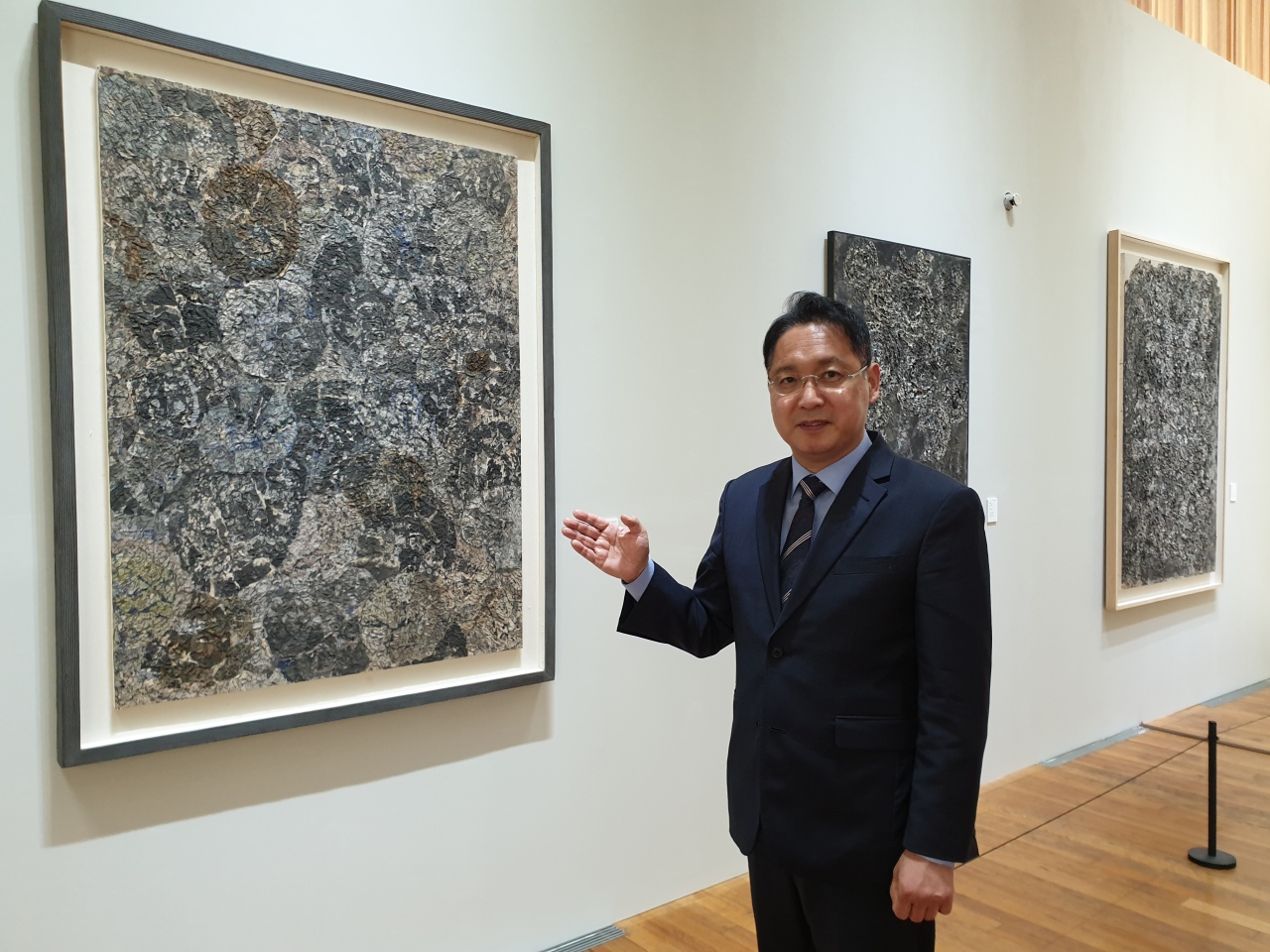 Ryu Chul-ha, director of Lee Ungno Museum, poses at the exhibition “Lee Ungno, Paintings made from Paper” at the museum in Daejeon, on June 2. (Park Yuna/The Korea Herald)
The Lee Ungno Museum is home to 1,366 works by the artist. It hosts four main exhibitions including Artlab, an exhibition of a young artist who continues in the spirit of Lee. This year, Kim Deok-han -- who modernizes traditional lacquering work and applies it to his art -- was selected for Artlab.

The museum also runs the “Lee Ungno Residency” program, which annually sends promising artists to Paris from August to October. The artists are given an opportunity to visit Lee’s workroom there and hold a return exhibition in December at the museum.

The museum is temporarily closed from June 20 to July 5 to prevent the spread of COVID-19 in the city. For more information, visit the museum’s website at leeungnomuseum.or.kr, or call (042) 611-9800.