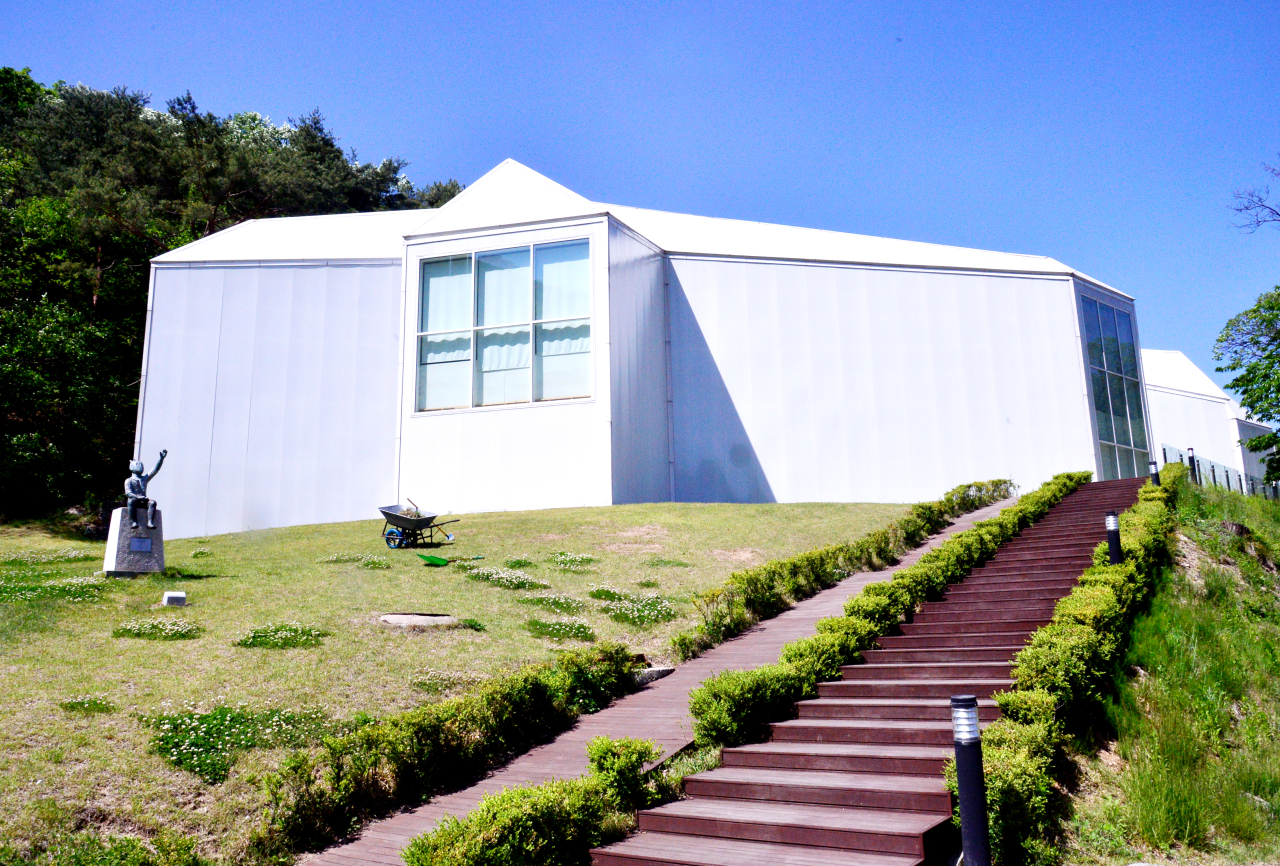 The Chang Ucchin Museum of Art in Yangju, Gyeonggi Province (Park Hyun-koo/The Korea Herald)
The following is part of a series that explores museums dedicated to the well-known Korean contemporary artists that bear their name --Ed.

On a hill covered with green grass, a light blue building greets visitors. The Chang Ucchin Museum of Art in Yangju, Gyeonggi Province, is composed of triangles and rectangles. Its design reflects the artist’s lifelong philosophy: simplicity.

“If my father were alive, he would have loved this place,” Chang Kyeong-soo, the artist’s eldest daughter and the honorary director of the museum, told The Korea Herald on May 13. “I imagine my father quietly looking out the window and watching kids playing on the grass. He loved kids and family.”

Kyeong-soo was very close to her father, one of South Korea’s representative modern artists, whose paintings suggest childlike innocence and simplicity. She recalled how he used to take her for walks around Changgyeong Palace in Seoul and show her his paintings before revealing them to the world.

The museum houses 230 works by the artist, who died unexpectedly in 1990 during an asthma attack. Kyeong-soo led its establishment in 2014 as a tribute to her father. 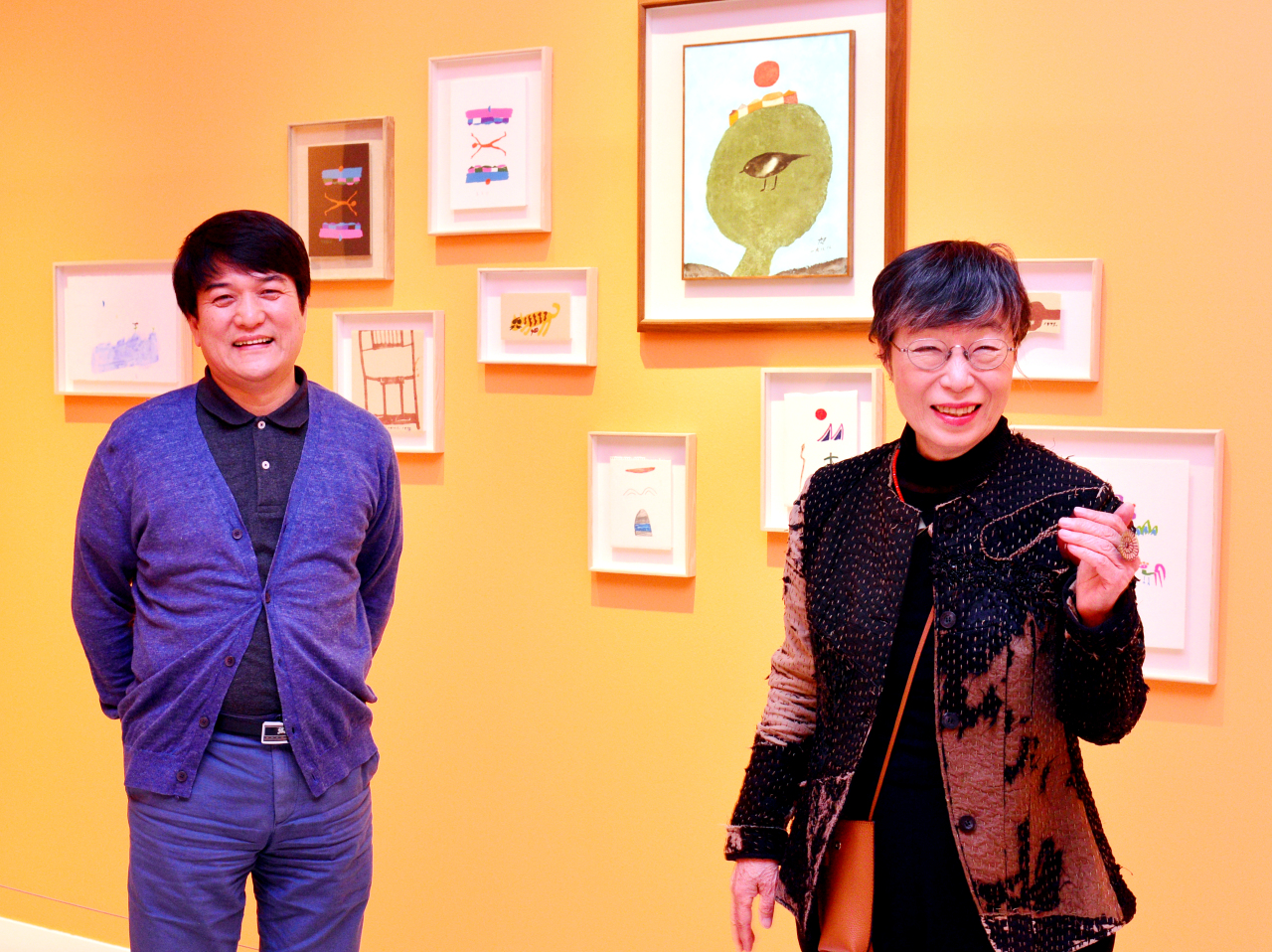 Chang Kyeong-soo (right), Chang Uc-chin’s daughter and the honorary director of the Chang Ucchin Museum of Art, poses with Cho Hyun-young, director of the museum, in front of Chang’s artworks at the museum. (Park Hyun-koo/The Korea Herald)
Born in 1918, the artist lived through much of Korea’s turbulent recent history -- the Japanese colonial era, the Korean War, and industrialization in the 1960s and 1970s.

He loved folksy subjects such as Korea’s rural scenery, family, magpies and hanok -- traditional Korean houses. Due to his pursuit of simplicity, some say his paintings look like the work of a child. But that simple style was the result of Chang’s agonizing struggle to understand himself as an artist.

“An artist’s role is to seek out their own art with creativity, and they need to know themselves very well. In order to do so, they need naivete,” he wrote in a book of short prose published in 1976.

“He always said, ‘I am simple,’” his daughter recalled. 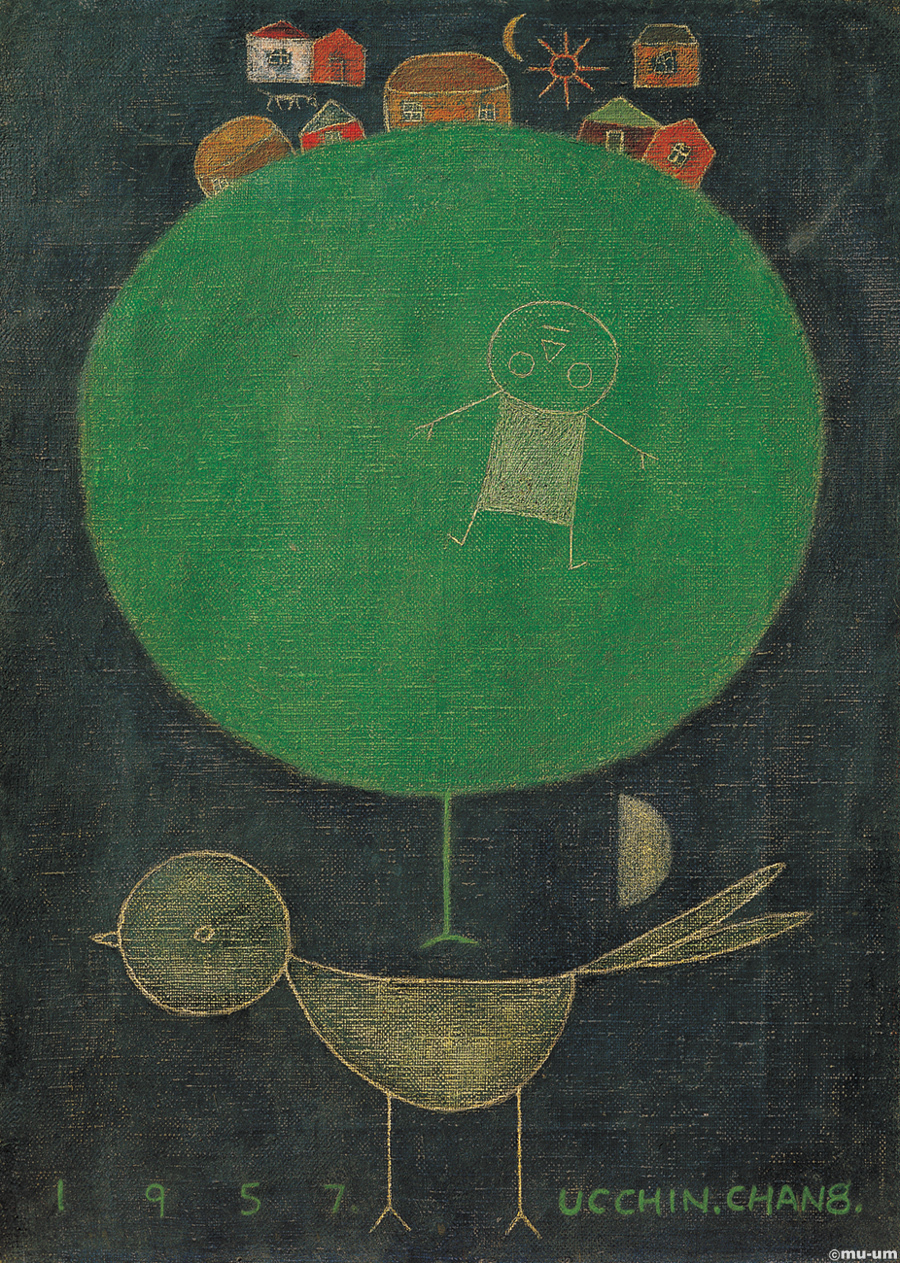 “Tree and Bird” by Chang Uc-chin (Chang Ucchin Museum of Art)
After graduating from high school in Korea when the country was still under Japanese rule, Chang Uc-chin left for Japan to study art. At the time, modern art was the trend in Japan, which was heavily influenced by the European art scene.

“He refused to learn the trend there. At school, he drew Japanese modern art as he was taught. But at home, he did his own thing,” Kyeong-soo said.

Chang returned to Korea after the country’s liberation at the end of World War II. Decades later, in the 1960s and 1970s, Koreans became fascinated by Western-style abstract paintings. Soon there were no painters in Korea who did not do abstract paintings, according to Kyeong-soo.

The trend caused difficulties for Chang. He was tormented about whether to follow it or maintain his own style. Chang hardly held a brush during that time, his daughter recalled.

“He constantly asked me, ‘Who am I, and who are you?’ … I laughed it off at the time, but now I think he greatly suffered as an artist who considered uniqueness in one’s paintings the most important thing.” 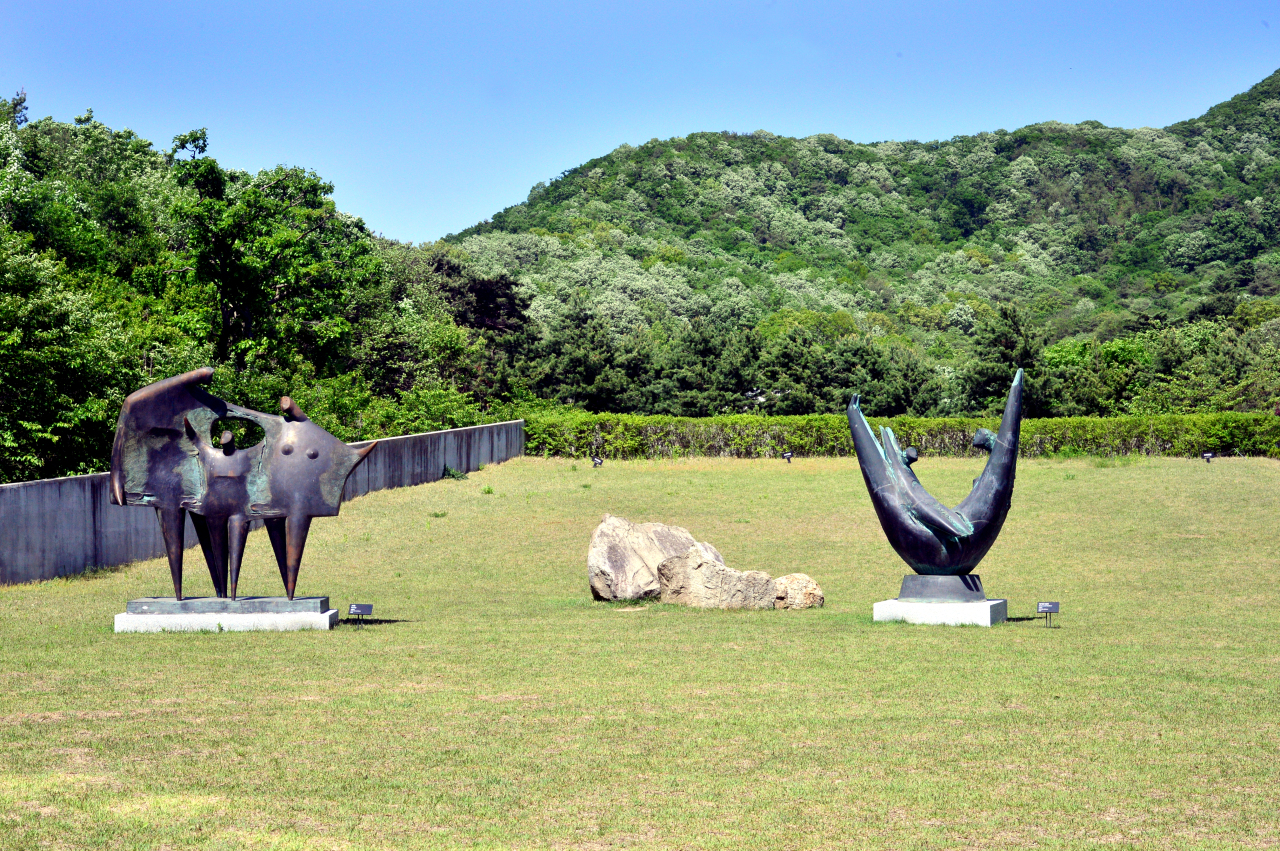 The Chang Ucchin Museum of Art in Yangju, Gyeonggi Province (Park Hyun-koo/The Korea Herald)
Chang experimented with monochrome painting for a year, but soon returned to his signature style.

“It looked as if he concluded that abstract painting was not his thing,” his daughter said.

Chang’s paintings are relatively small -- most are less than 50 centimeters in length and width. “He rarely put one of his drawings on an easel to paint,” Kyeong-soo said. “He laid it on the floor or put it on his palm. He stuck to small paintings so he could depict things intensely.” 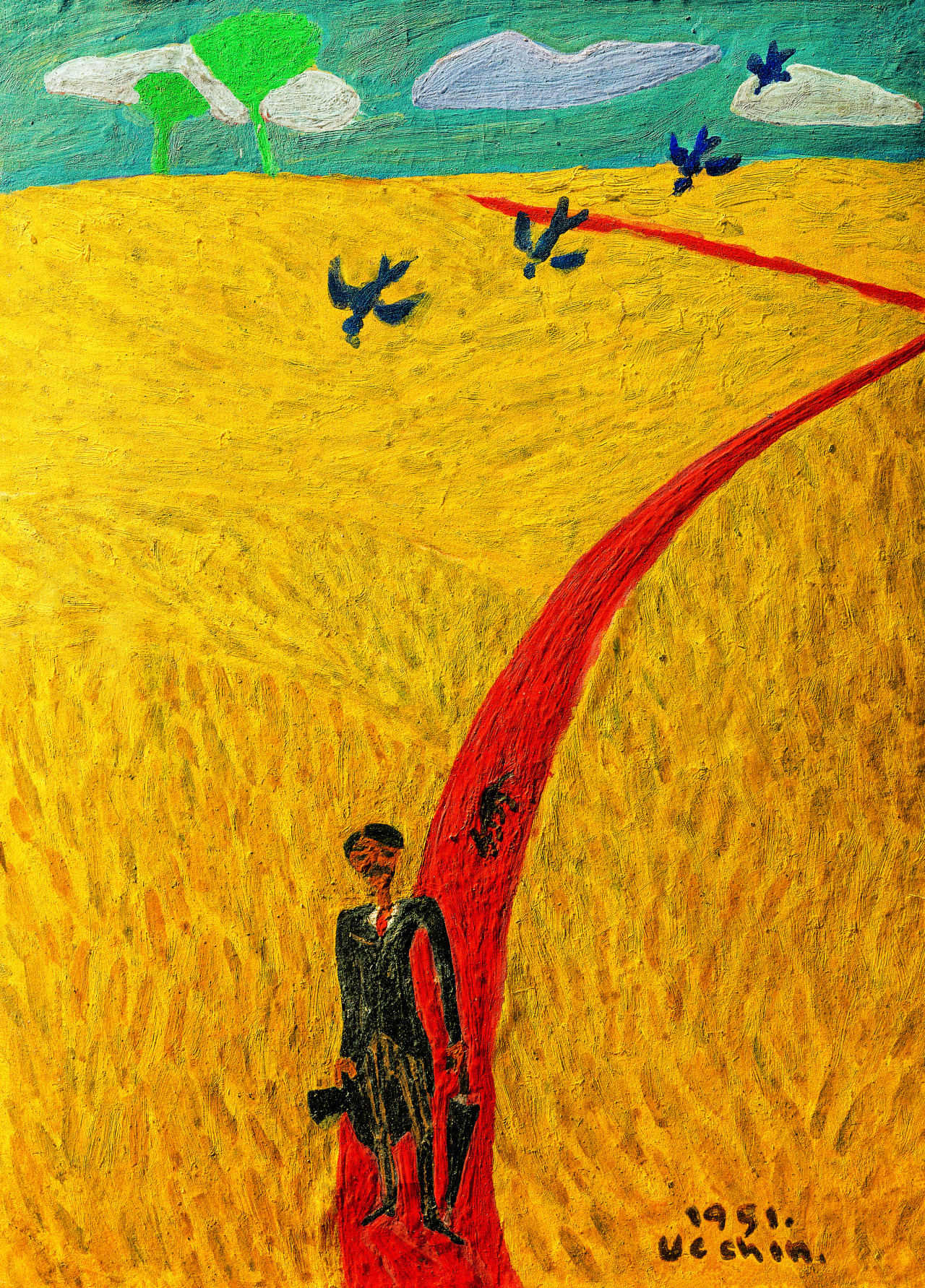 “Self-Portrait” by Chang Uc-chin (Chang Ucchin Museum of Art)
Some of Chang’s paintings are imbued with a sense of humor. “Self-Portrait,” which Chang completed in 1951 during the Korean War, depicts peaceful rural scenery, full of golden waves of rice before harvest. Wearing a tuxedo, Chang walks along a pathway with a puppy and birds following him.

“There is no way such a peaceful scene could have taken place in the devastation of war. It was humorous,” Kyeong-soo said. “Because there were not enough painting materials during the war, my father painted on coarse pulp paper using watercolors with oil added to them.”

Kyeong-soo, who regards her father’s paintings as his other self, treasures “A Family Portrait” the most.

“Much of what he said remains deep in my heart, such as ‘Do not compare yourself to others, seek out your own thing,’ or ‘treat things kindheartedly, then many things will resolve themselves,’” she said. “I think the latter saying particularly resonates in the time of this COVID-19 pandemic.”