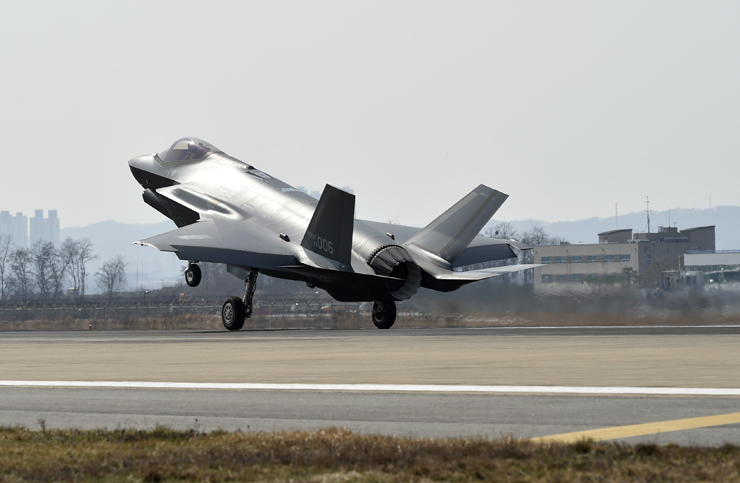 F-35A (Yonhap)
The government is seeking to slash about 300 billion won ($244.96 million) from this year's defense budget to fund an extra spending plan aimed at coping with the economic fallout from the coronavirus pandemic, the defense ministry said Wednesday.

The planned cut is to fund a third extra budget of 35.3 trillion won by readjusting this year's annual budget and issuing state bonds to cushion the economic fallout from COVID-19.

A total of 315.8 billion won is expected to be reduced, 153.6 billion won from arms procurement expenses and 162.2 billion won from troop operations. But the actual budget cut will amount to 297.8 billion won, as 18 billion won will be newly added to the budget for soldiers' education on the latest information and communications technologies, officials said.

Of the total, 70.6 billion won will be slashed from the budget for the planned purchase of ship-to-air missiles from the United States.

"The US government and its manufacturer had initially planned to sign a contract this month to sell the missiles to South Korea, but their contract was deferred due to internal issues. So we are to return the funds for this project to the state," an official of the arms procurement agency said. The purchase was to be made through a government-to-government "foreign military sale (FMS)" program.

Also on the list of budget cuts are the construction of around 20 230 ton-class next-generation patrol killers and the facility construction regarding tactical ground-based guided weapons, according to the ministry.

The additional budget cut has sparked concerns over the possible impact on the country's defense capabilities.

"The budget cut can be seen as the defense ministry's responses to nontraditional threats against the lives and the safety of the people," the ministry said. "Most of the budget will be cut from projects to be postponed, so its impact on our readiness posture and the financial status will be minimized." (Yonhap)