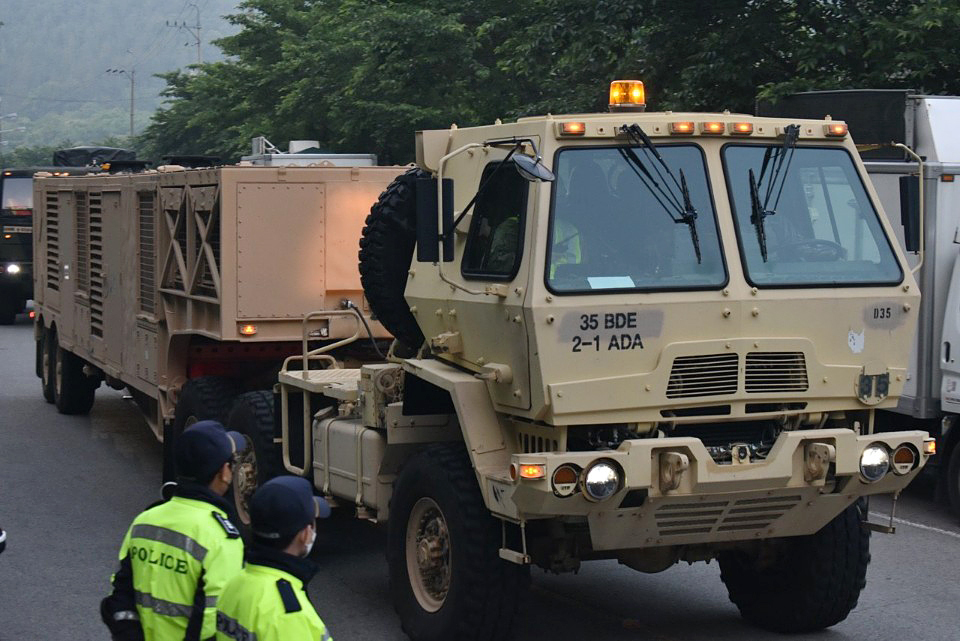 Military vehicles transport missiles to the site of the THAAD base in the town of Seongju, North Gyeongsang Province.
New interceptor missiles were delivered to a US military base in South Korea on Friday to replace worn-out equipment, amid lingering opposition by local residents.

The Defense Ministry said it has supported the ground transportation of the replacement missiles, as well as power generators and electronic equipment for data collection, and other supplies to improve living conditions of military officials on a Terminal High Altitude Area Defense base in Seongju, North Gyeongsang Province.

The delivery began late Thursday evening and ended at around 6 a.m. Friday morning, according to the ministry.

“The new missiles are the same type and quantity as the previous one,” a ministry official said stressing the current ones reached the end of their operating cycle. The ministry, however, declined to give out the exact number.

On concerns that the latest transport is part of US’ announced plan to enhance performance of its seven THAAD batteries deployed around the world, with one in South Korea, the official stressed it has nothing to do with the upgrade.

“No additional THAAD launchers have entered South Korea or the base,” the official added.

The US has installed the THAAD system in Seongju, with a total of six launchers, since 2017 to counter North Korea’s missile threat. There are eight interceptor missiles for each launcher, putting the total number of missiles in South Korea at 48.

In the past, the US military had mainly transported the equipment via air, due to strong opposition from Seongju residents that have led to a violent clash with the police. But the latest delivery was made by ground, as the supplies were too heavy to be airlifted, officials said.

Some 70 residents and civic group members held an overnight rally from Thursday to protest the delivery, and clashed with around 3,700 police dispatched to the region. Five people were reportedly injured and transported to nearby hospitals.

The delivery of missiles comes at a sensitive time as the THAAD issue could rattle China once again, amid brewing tension between Washington and Bejing, ranging from trade to COVID-19, human rights and the status of Hong Kong. In 2017, Seoul’s decision to deploy the US-missile system angered China, which views THAAD as a threat to its national security, and hit back at South Korea with economic retaliation.

The official said the government explained the issue in advance to China through various diplomatic channels, and asked for its understanding. China was known to have not reacted negatively, it added.