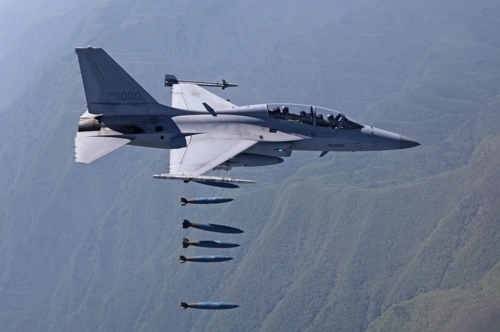 South Korea’s 18-trillion-won ($14 billion) fighter jet project is facing payment delays amidst the COVID-19 pandemic, while officials involved have assured it does not mean it is being shut down.

Launched in 2016, the KF-X project aims to develop a next-generation fighter jet and mass-produce 180 units by 2026. The project, the biggest in Korean history, needs 8 trillion and 10 trillion won for development and mass production, respectively. Indonesia is responsible for 20 percent of the development costs, or 1.8 trillion won. However, it has been delaying its payments lately, with 500.2 billion won overdue as of April.

“Typically, defense contracts between military and defense companies involve collaterals. However, the KF-X project doesn’t include a collateral as it is a co-development project based on a memorandum of understanding, not a defense contract. Indonesia is supposed to pay its share on a yearly basis,” a military official said.

The MOU was signed in 2010 between Korea’s Defense Acquisition Program Administration and the Indonesian military.

As the project lacks a collateral, there is no leverage to force Indonesia to meet the payment deadline. Under the deal, Indonesia will use 50 fighter jets, and Korea the rest.

“KAI is not in a position to comment on the budget status, but the next-generation fighter jet is being developed as planned and will be introduced by 2021,” a company official said.

Daewoo Shipbuilding & Marine Engineering is another defense company affected by uncertainties from Indonesia.

“The Indonesian navy hasn’t paid advance payments yet, but once the payments are completed, it’s almost 100 percent Indonesia will pay the rest of the $1 billion deal as the country’s state-run Bank Mandiri stands surety,” a DSME official said.

“As countries are adjusting their budgets to respond to the COVID-19 outbreak, there have been challenges in our plans for winning defense contracts,” a company official said.

“However, there hasn’t been any disruption regarding contracts that had been already signed.”

The Indian military, which plans to spend $130 billion in the next five to seven years to modernize its armed forces, had selected the Korean-built missile system for acquisition in October 2018, though the deal hasn’t been signed yet. Australia’s Land 400 Phase 3 Infantry Fighting Vehicle program, which aims to procure up to 400 modern IFVs, is worth between $6.3 billion to $9.4 billion.