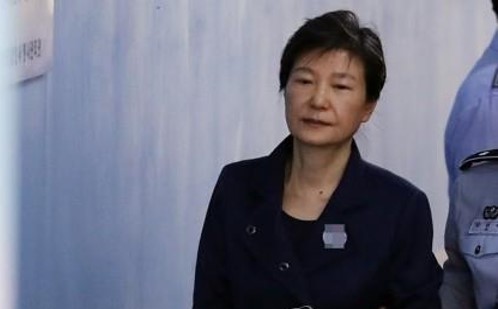 Prosecutors on Wednesday demanded an imprisonment of 35 years for former President Park Geun-hye in an appellate court's retrial for her bribery, abuse of power and embezzlement charges.

In a hearing at the Seoul High Court, prosecutors demanded Park be punished with a 25-year prison sentence, a fine of 30 billion won (US$24.36 million) and a forfeit of 200 million won on bribery charges.

In addition, they demanded an imprisonment of 10 years and a forfeit of 3.3 billion won for the former president on abuse of power and other criminal charges.

Following her ouster from the presidency in 2017, Park was convicted on charges of conspiring with her longtime confidante, Choi Soon-sil, to force big conglomerates, including Samsung, to donate 77.4 billion won to two foundations under Choi's control.

Park was additionally indicted in January 2018 on charges of accepting 3.5 billion won from three chiefs of the National Intelligence Service (NIS) from May 2013 to September 2016 in collusion with her secretaries.

Her retrial came after the Supreme Court last August ordered a review of her corruption case in which Park was sentenced to 25 years in prison by an appeals court. The top court said some of the bribery charges should be dealt with separately, which may lead to heavier punishment. Last November, the Supreme Court also ordered a retrial of Park for acceptance of off-the-books funds from the NIS, saying her acquittals by lower courts on bribery and state fund loss charges should be reversed.

While demanding the hefty prison sentence, the prosecution criticized Park for abusing public power given by the people.

"The accused forced major domestic conglomerates to donate money to culture and sports projects at the request of Choi Seo-won (the current legal name of Choi Soon-sil). She also used the power given by the people for Choi's personal profits by forcing Samsung Electronics Vice Chairman Lee Jae-yong to pay several billions of won in bribes," the prosecution said.

On the NIS fund scandal, the prosecution pointed out that few people would think of such an act as fair and just and that public trust in the integrity of the president and NIS chiefs has been damaged.

The sentencing hearing is scheduled to be held on the afternoon of July 10.

Park was not present at Wednesday's appellate court hearing, as she has been boycotting all her trials.

Park is now serving a total of 32 years in prison for bribery, abuse of power, election law violations and other charges. She drew a 25-year jail term and a fine of 20 billion won on charges of abuse of power and corruption and a five-year prison term and forfeit of 2.7 billion won in her NIS fund case.

Separately, the Seoul High Court sentenced Park to a two-year prison term in 2018 on charges of illegally interfering in the then-ruling party's candidate nominations ahead of the general elections in April 2016. The jail term was confirmed after both Park and prosecutors didn't appeal to the Supreme Court. (Yonhap)