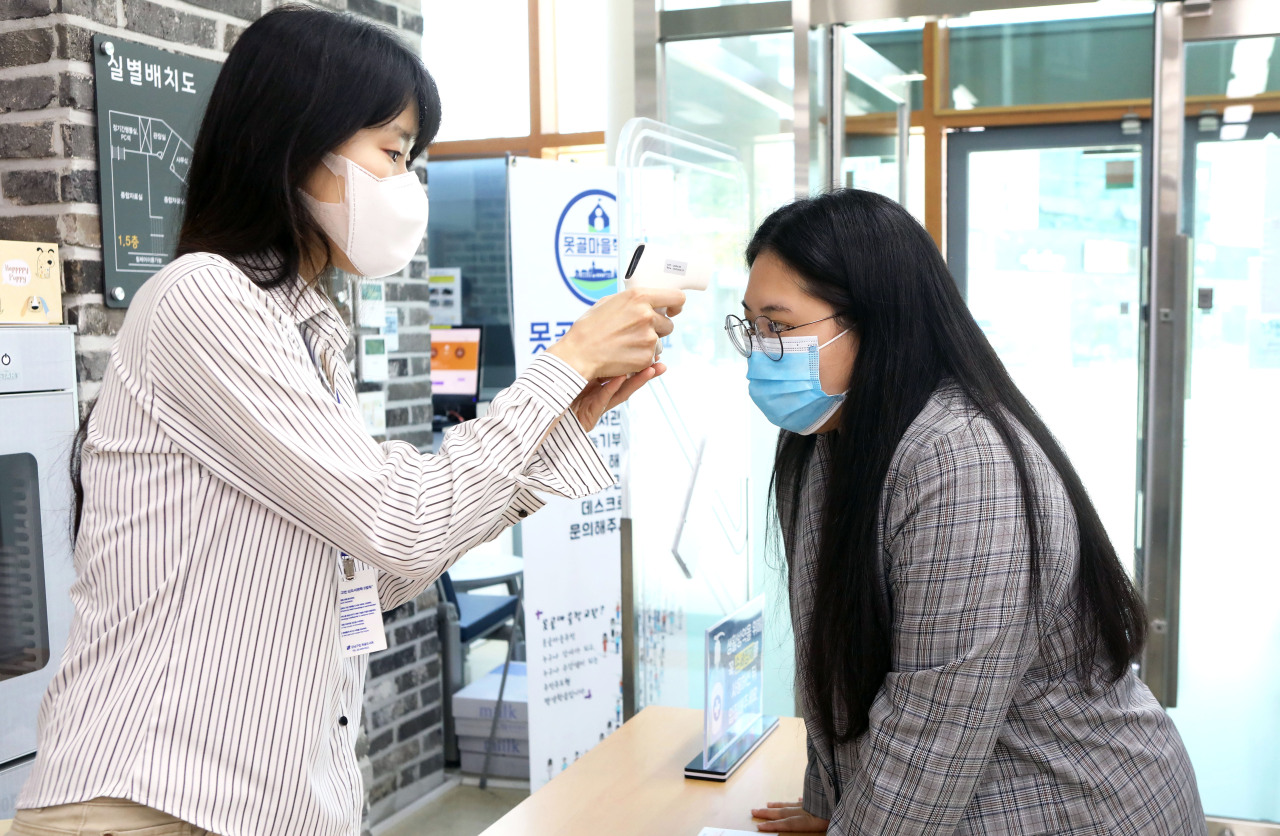 A visitor is thermal screened before entering a library in Gangnam, Seoul. (Yonhap)
Symptoms of COVID-19, the respiratory disease caused by the novel coronavirus, can range from those akin to the common cold or flu to pneumonia, as well as most recently observed loss of taste and smell. The varying symptoms and their resemblance to seasonal illnesses leave patients wondering if they’re sick with the coronavirus, some taking the anxiety to a drastic degree, experts say.

Infectious disease specialist Dr. Kim Woo-joo of Korea University Hospital in Guro, southern Seoul, said in a phone interview that one of his patients had to undergo testing six times, complaining of coronavirus symptoms despite repeated negative results.

All her tests and chest scans, which came back normal, failed to reassure the patient, he said.

“She still panicked about the possibility that she or her family were coming down with the virus infection,” he said, adding that he advised her to take psychological help.

Psychiatrist Dr. Koo Ja-hyun at a mental health center in Bucheon, Gyeonggi Province, said patients with anxiety were more prone to experience such imagined or exaggerated symptoms that their physical examination does not reflect.

“This condition is known as the somatic symptoms disorder, which is where patients are preoccupied with falling gravely ill,” he said. “Getting tested and having the results confirm they are OK can help ease the fear.”

The pandemic has prompted many to attempt self-diagnosis, as reported symptoms of the virus share similarities with other common illnesses such as allergy.

“There was a time back in February when I was definitely sure I had the virus,” said a 28-year-old who works in a Seoul-based film distribution company. “I had all the symptoms -- fever, cough, sore throat -- which got better in about a week.”

But such symptom checks are not a reliable marker of the disease at all, as even doctors say they cannot tell if someone has COVID-19 based on symptoms alone.

“You absolutely have to get tested to know if you have the virus or not,” said primary care physician Dr. Choi Seung-jun, who has been volunteering at a coronavirus testing center in Yongsan, central Seoul.

Korea Centers for Disease Control and Prevention said over 30 percent of known infection cases here were without symptoms, which is among numerous factors that made virus containment so tricky.

Psychologist Yook Sung-pil, who is leading the Korean Psychological Association’s COVID-19 response, said mental health problems including anxiety and depression were on the rise amid the coronavirus crisis.

“Those with preexisting mental health issues in particular can suffer aggravating conditions,” he said.

A survey released Tuesday suggests that the novel coronavirus pandemic is posing mental health challenges for close to half of South Koreans.

In light of the pandemic’s impact on mental health, the Ministry of Health and Welfare has been offering over-the-phone counseling services free of charge to people seeking assistance from March.

United Nations chief Antonio Guterres said in a video message last week that the COVID-19 attacks not only our physical health but has also “increased psychological suffering,” calling on governments to expand mental health services.