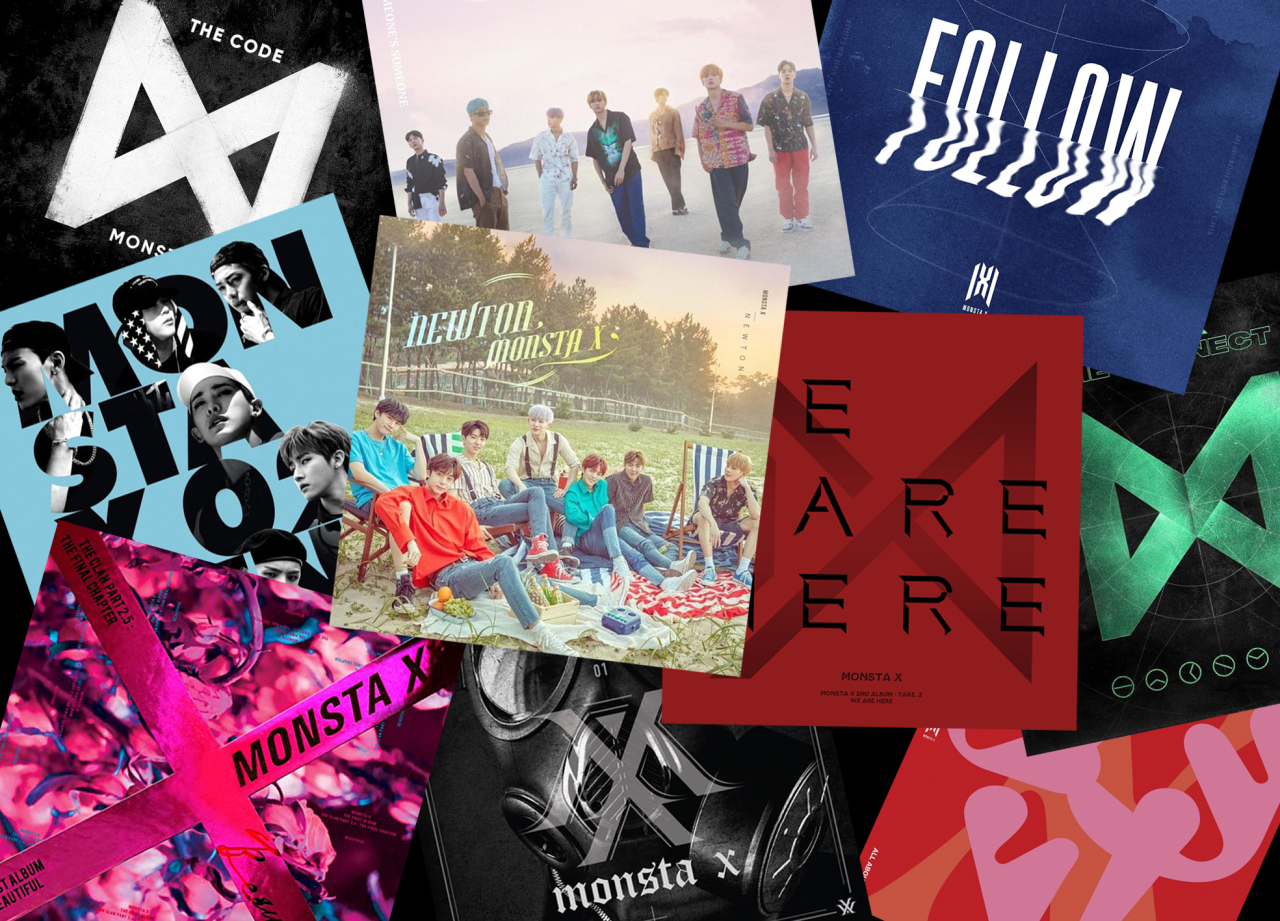 Monsta X uses sea metaphors to convey the feeling of being lost, singing “I’m falling for you,” in this love song from its second studio album.

As the title suggests, this mid-tempo track creates a dreamlike atmosphere as the group sings the dramatic melodies against strong beats and piano riffs.

Despite normally opting for a powerful synth-dance sound, the group adopts a soft-rock arrangement for “By My Side” with reflective lyrics.

Released as part of the soundtrack for the Korean drama series “Shopping King Louie,” this 2016 release is another straight rock number.

Jooheon took part in composing the melody, while he and I.M wrote the lyrics for this fun, love-themed track. As the group sings in harmony “she’s like white sugar, she melts me,” you can almost taste the sweetness in the air.

The Korean title of the song roughly translates to “What are you doing and where?” The group sings, “My baby/ Can’t stop loving you,” against thumping beats in this song about love that borders on obsession.

From the dramatic intro and spitfire rap to the EDM-inspired chorus, “Fallin’” is a track that speaks to Monsta X’s cheerful and energetic nature.

Starting with a calming intro, the song builds up with banging beats as the lyrics talk about missing someone and being left behind, capturing a sense of anger.

It’s a soft, sweet love song with an upbeat EDM chorus. The group shot a special video for the track as well.

This song jumps straight in with squeaky beats before a dramatic key change brings in the chorus, followed by spitfire rap.

This one is for the summer, as the sensual track with rhythmic beats conjures up images of going for a drive on a summer’s evening.

This song, featuring Wheein from Mamamoo, sees the guys ponder a relationship that has gone downhill and hope to bring it back on track in this harmonious track.

Despite the title, the beat-heavy mid-tempo song from the group’s US debut album is about the narrator hating to see the person they love happy without them. The gap between the title and the lyrics make the story more dramatic.

“Jazzy” and “groovy” spring to mind for this string-laden track that gets you in the mood for the dance floor.

On this energetic track, stuttery EDM beats come to a halt for a big pop chorus.

The energetic tune comes with electrifying beats with the highly dramatic, whispered chorus.

The high-energy song is full of spitfire rap, shouty singing and aggressive beats -- a fitting choice seeing as the title is the equivalent of “Hey!”

Jooheon and I.M wrote the lyrics for the electrifying track from their second studio album, “Are You There? The 2nd Album Take.1.”

Against brassy beats and thumping beats, Monsta X alternates between singing “Do it now or never” and rapping “Who’s talking behind my back?”

Sirens blast throughout the song as the group encourages you to take the leap.

Harmonious singing opens up the song before a transition to the chorus. The song feels light, like a feather.

The song falls on the softer side of the group’s discography, as a whispered voice opens the song.

While the chorus has ear-popping beats sprinkled all over, Monsta X decided to keep things simple and calm for the rest of this 2017 track from its fifth EP.

This piano-driven ballad with heavy bass has a melodious chorus powered by electric guitar riffs that just keeps going.

This 2016 electro-pop track is as dramatic as it is danceable thanks to the melodious chorus.

This tightly arranged track takes you for a musical ride as the uplifting melodies and powerful beats blast in.

“Love U” is full of electro-pop vibes and seriously hooky beats. The song is more of a grower and a far cry from the group’s signature intense and powerful sound. Yet the mid-tempo track does the job of getting you in the dancing mood.

This gospel-laden track is audacious and brash in sound, and the lyrics reflect Monsta X’s assertive nature.

The lead track of “All About Luv” is a bass-heavy breakup song. The moody tune talks about jumping ship on an already sinking relationship.

This uplifting, summery song compares the power of one’s charm to Newton’s law of gravity.

While the title is quite out there, the song itself is filled with shouty raps and an intense beat drop that keeps you going.

Monsta X shows its fighting spirit in this capital-P pop banger. The lead single from the group’s fourth EP, “The Clan Pt. 2 Guilty,” the song captures its high-energy nature.

From the exotic intro through the intense spitfire rap to the beat drop right before the chorus that is laden with brassy beats, you are in for a dynamic ride.

The title track from the band’s debut EP set the tone for its edgy sound in the years to come. “Can you call this a crime?” the artists sing. As the thumping beats kick in, the group brings in its signature spitfire rap before the big pop chorus drops.

Produced by Grammy winner Ali Payami, this fresh ’80s-inspired disco-pop song is a dance floor hit. The group co-wrote the track, and it makes the perfect addition to a nighttime driving playlist.

Produced by Steve Aoki, this smooth electronic dance track is essential for a driving playlist. It was first released in Korean as part of the album “Take.2 We Are Here” before the English version came out.

This mid-tempo single features crisp harmonies and breezy beats as the group sings about finding someone worth giving it all up for.

Produced and written by Giriboy, the song was sung from the perspective of a guy who falls in love and takes the initiative to express his feelings.

This English-language track saw the band team up with French Montana. Featuring a heavy dose of powerful beats and rich bass, the rhythmic mid-tempo tune came on the heels of news that the band had signed on with Epic Records, home to the likes of Celine Dion and Mariah Carey, to pursue a career in the US.

“Beautiful” is yet another track from Monsta X that features various musical elements, such as strong beats, collectively sung choruses and catchy melodies. However, it’s the delicate melody and lyrics that truly make this 2017 single stand out. One line goes, “You’re so beautiful/ I can’t take my eyes off you/ Like a thorn on a flower/ I know I’ll get pricked but I want you.”

The lead single from the group’s second studio album, “Take.1 Are You There?” “Shoot Out” is a hip-hop-tinged dance track. Heavy with both rap and beats, it presents an aggressive yet catchy sound. The song starts with a speedy rap before the bridge explodes into an irresistibly hooky chorus. Adding to the intensity are the tightly choreographed dance moves, which the bandmates show off in the video sporting all-black outfits.

As the main concept of “Take.2 We Are Here” is finding hope, the reptilian-inspired lead track is a fitting choice. It seems that the bandmates are singing from the perspective of an alligator to describe the feeling of being deeply in love.

“Dramarama” is an 808 bass-infused urban and funk track, released in 2017 as part of the band’s fifth EP. It’s powerful yet gentle thanks to a dramatic drop in tone during the bridge, before the chorus brings the song to a climax.

This 2018 track checks all the boxes for a great dance-pop tune -- a catchy melody, addictive hooks, upbeat beats and fun lyrics. As the title suggests, the lyrics talk about a guy who is jealous of those who have caught the attention of his crush. The rather intense premise sees the guy turning green with envy. The song’s straightforward melody is reminiscent of the pop sounds that dominated the late 1990s and early 2000s.

This 2015 single is one of the group’s biggest hits. Here, the artists skillfully switch between hip-hop and pop. Shot on a rooftop showcasing Seoul’s skyline, the video has racked up over 92 million views. The track is laden with extremely catchy sax riffs. In a mere four minutes, the group, which had been in the game for only a few months at the time of the song’s release, manages to show off its vocal, rap and dance skills.