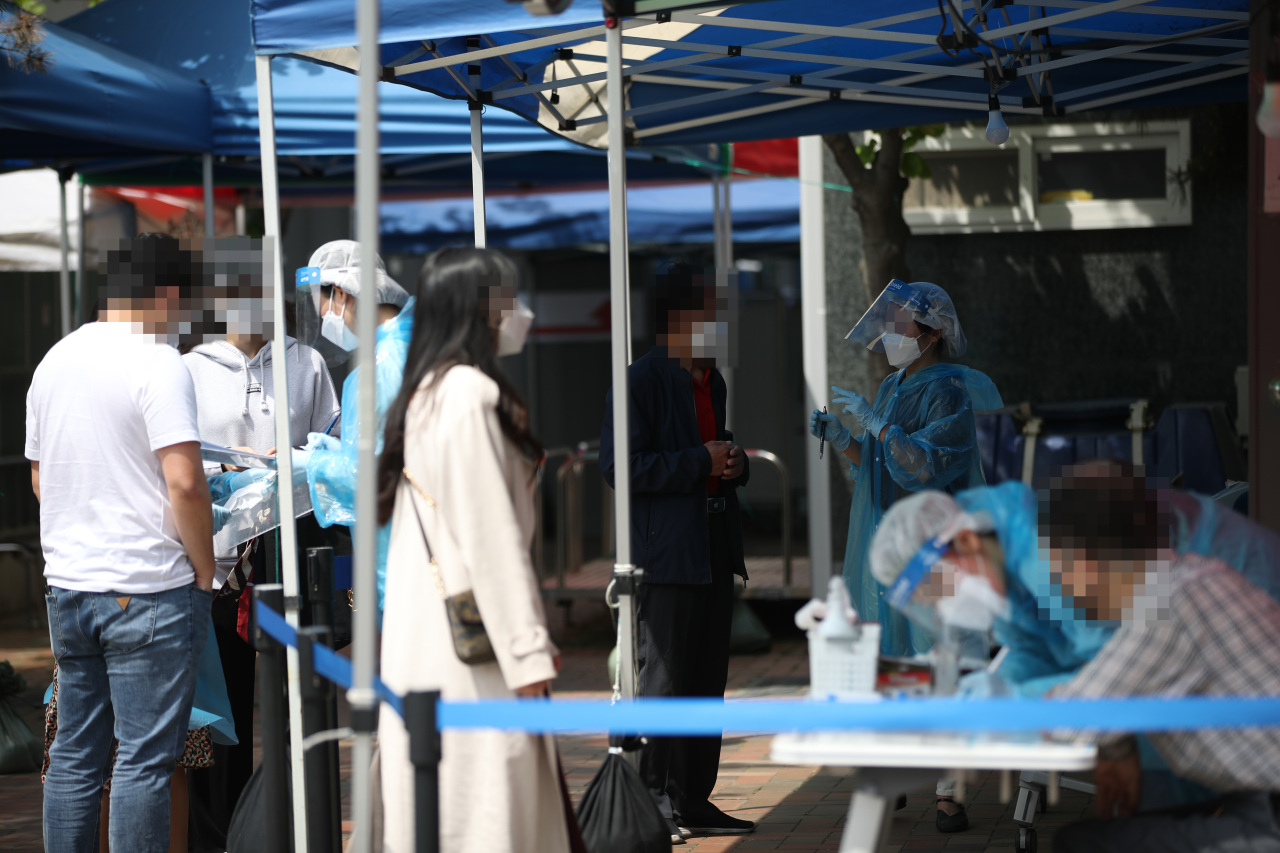 (Yonhap)
South Korea is again raising its guard against a cluster infection linked to clubs and bars in Seoul as related confirmed cases have been reported across the country and many potentially infected people remain out of contact, health authorities said Tuesday.

The country reported 27 more cases of the new coronavirus on Monday, with 22 of them local cases, bringing the nation's total infections to 10,936, according to the Korea Centers for Disease Control and Prevention (KCDC).

The number of virus cases traced to bars and clubs in Seoul's popular nightlife district of Itaewon climbed to 93 on Monday, up 21 from a day earlier, the KCDC said. Including cases that were tallied as of Tuesday at noon, total infections linked to Itaewon clubs and bars reached 102 nationally.

Of the newly confirmed cases linked to Itaewon, 73 had visited the places with another 29 being those who had contacts, including family members, the KCDC said.

"An epidemiological investigation is still underway to look for more people who had contacts with Itaewon-related infections," said Kwon Joon-wook, a senior health official.

The country had been adding fewer than 15 cases of COVID-19 since mid-April, with the number of domestic infections even falling to zero at some points, before rebounding to 18 and 34 cases over the weekend to reach 35 on Monday.

The hike came after a 29-year-old man who tested positive for COVID-19 visited clubs and bars in Itaewon on May 1. More than 1,500 people were believed to have visited those places during the time with the virus patient.

The KCDC said it conducted tests on more than 12,000 people on Monday, with some 7,000 of those linked to the Itaewon cluster infection.

The Seoul city government said it has secured the names of 5,517 people who visited the affected five clubs and bars in the district between April 24 and May 6, and gotten in touch with 2,405 of them so far.

The officials said they have sent text messages to another 1,130 people, instructing them to get tested for COVID-19 regardless of symptoms. The city government is attempting to contact the remaining 1,982 people by using their credit card records and location data from telecom operators.

"Our goal is to make sure that Itaewon case does not lead to mass community infection cases," Yoon Tae-ho, a senior health ministry official, said in a briefing earlier in the day, adding that health authorities will use credit card and smartphone information to get in touch with the visitors.

On Tuesday, the authorities said two people who each visited one of two other clubs in Itaewon -- Made and Pistil -- were confirmed to be infected with the virus, complicating efforts to trace the source of the latest cluster infection.

Officials said the 29-year-old patient, whom they had considered to be the first patient in the cluster infection linked to Itaewon, did not visit either Made or Pistil.

The development raised the possibility that the person may not be the source of the virus in the cluster infection linked to Itaewon.

After keeping local infections at zero for a few days, South Korea saw an unexpected spike in cases coming from entertainment facilities in the area, with infections reported not only in Seoul but across the country.

Seoul, the most populous city, imposed an administrative order to effectively suspend business at clubs, bars and other nightlife establishments Saturday. The precautionary measure will remain in place until further notice, without specifying a date.

Imported cases, which were the biggest threat for South Korea's quarantine operations over recent days, are now less of a concern.

But the country still added five such cases Monday.

South Korea gave the go-ahead to the normalization of public facilities and other business establishments under the condition that they start following basic sanitation measures Wednesday.

The country vowed to maintain most of the eased regulations despite the new cluster infections for the time being, although it plans to apply tougher restrictions on entertainment facilities.

The country added two more deaths with its death toll at 256, the KCDC said.

In total, 9,670 people in South Korea have recovered from the virus, up 38 from a day earlier.

The mortality rate of COVID-19 patients aged 80 or older was a mere 3.7 percent on March 2 when health authorities began tracking the figure, but increased to 10 percent on March 20 and breached the 20 percent level in early April, the KCDC said.