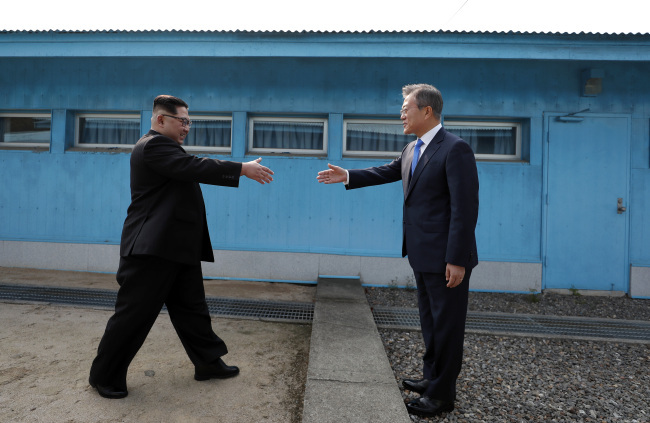 “We should not only watch the US-North Korea dialogue, but search and do what can be done between the two Koreas,” Moon said during a Q&A session following a special address to the nation marking the third anniversary of his inauguration.

Among various inter-Korean projects that Seoul has proposed to Pyongyang since early this year, Moon stressed that joint quarantine cooperation is a “realistic” project that can be done as priority, as it does not violate UN-led sanctions against North Korea.

“Both South and North Korea are putting a lot of efforts into dealing with the coronavirus, and even if it is successfully contained this time, many experts expect a second wave of the pandemic. Under the circumstances, if the two Koreas cooperate on preventing this infectious disease, it will contribute to hygiene and public health for all people both in the South and the North.”

The president also stressed that other inter-Korean projects, including reconnecting inter-Korean railways and arranging individual tours to the North and reunions for separated families, all remain worth pursuing despite the North’s apparent lack of interest.

“Still, North Korea has not responded,” he said. “I think (the North) is suffering from various difficulties due to the novel coronavirus. With overall international exchange and diplomacy stopped, we cannot just keep pressing North Korea.”

“Once the coronavirus situation calms down, we will continue to communicate and persuade Pyongyang to accept the offers,” he said.

Moon added that Seoul and Washington are maintaining communication with Pyongyang, while admitting it was “not smooth at the moment.”

“We have hoped that once US-North Korea talks are reached, inter-Korean relations could speed up. But unlike what was expected at first, they are still in the doldrums. It’s unclear when we will achieve results, considering the political calendar of the US,” he said, likely a reference to the US presidential election in November.

Denuclearization talks between the US and North Korea have been deadlocked since the Trump-Kim summit collapsed in Hanoi, Vietnam, in February 2019. Observers have said with Trump’s focus on winning reelection this year, his interest in engaging North Korea appears to have waned.