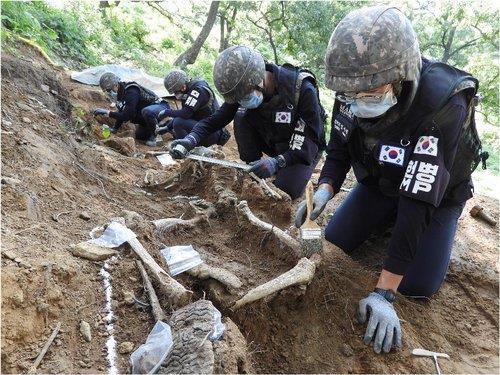 Soldiers at an excavation site. (Ministry of National Defense)
South Korea’s Defense Ministry said Wednesday that it would develop autonomous robots by 2024 at the earliest to recover the remains of soldiers killed in the 1950-53 Korean War.

The artificial intelligence-powered robots will scan underground to detect human remains, lowering the manual workload for the project, which began in April 2000. About 135,000 soldiers are still missing.

The recovery project covers Arrowhead Ridge, a site of fierce battle in the Korean War that now falls inside the heavily fortified Demilitarized Zone separating the two Koreas.

The two Koreas reached a military pact at their third inter-Korean summit in 2018, agreeing to cooperate to excavate the bodies in the DMZ, but have since failed to work together because of rocky inter-Korean ties.

Excavation began Wednesday at seven locations in Gangwon Province, after a two-month delay due to the novel coronavirus outbreak. The ministry plans to examine about 36 locations nationwide by November.