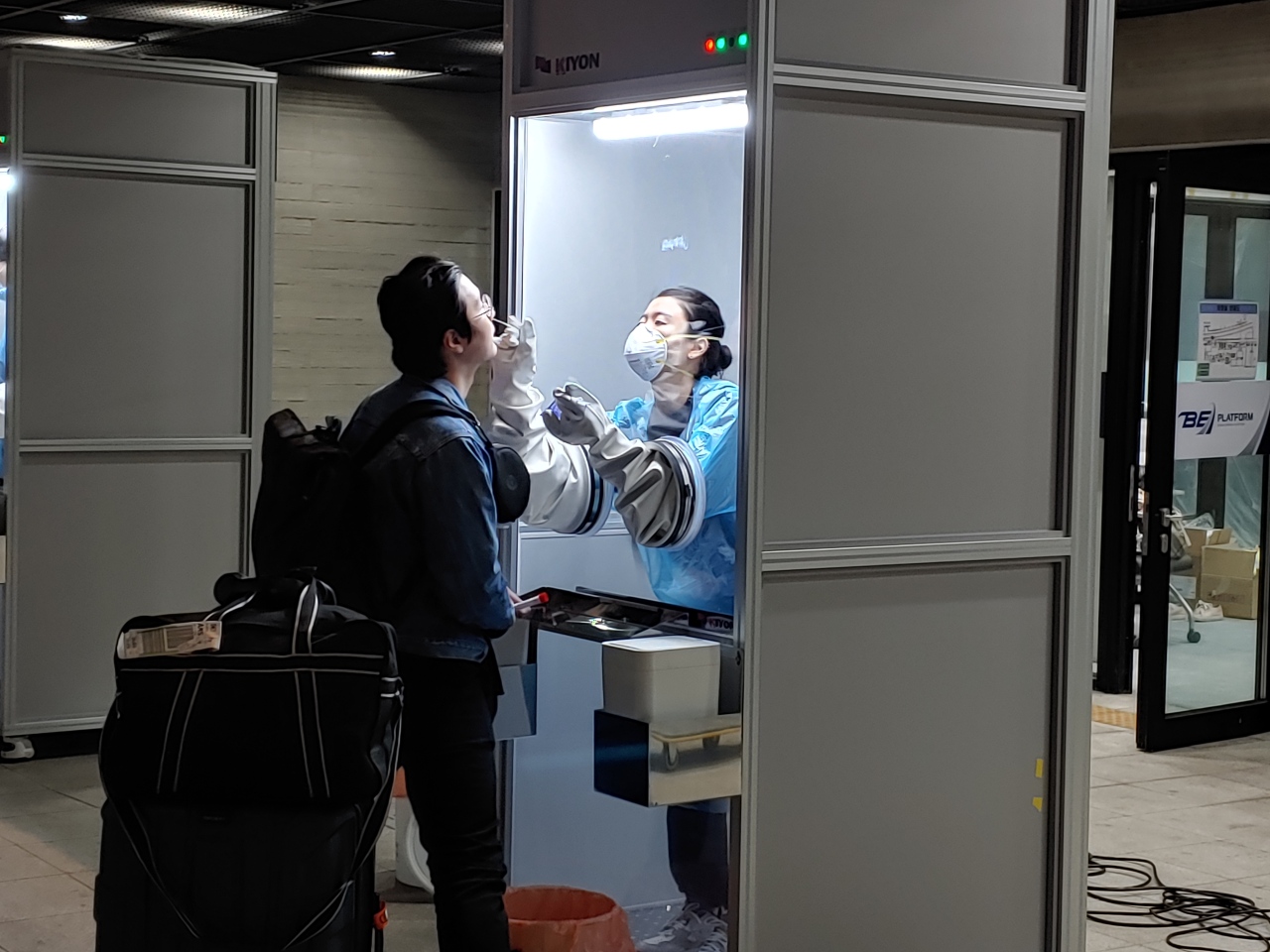 A health care worker conducts nasal swab testing inside the walk-thru testing booth. (Korea Kiyon)
About two months ago, a South Korean doctor came up with the idea of a coronavirus testing booth that would allow health workers to wear minimal protective equipment as they swabbed patients. A local medical device company realized the idea and put it to use.

The booths have caught on at medical institutions across the country, including the National Medical Center and Jeju International Airport. Now they are being deployed abroad.

Korea Kiyon, the company that co-developed the testing facility with Dr. Ahn Yeo-hyun, who works at a public health center in Busan, said the booths were being exported to Malaysia, Thailand, Japan, Italy and the Philippines, with more inquiries coming in from prospective clients elsewhere.

“We spoke with Ahn about where she thought there was room for improvement in the existing testing facilities, and coordinated the push for a solution,” Executive Director Lee Won-tae told The Korea Herald.

The government agencies have expedited the technology’s patenting and standardizing processes for emergency use, he said.

The booth, which measures 1 meter in length and width, stands 2.5 meters high and weighs 230 kilograms, is portable with fixable wheels on the bottom, Lee said. It is also more cost-effective, and is priced half as much as a negative-pressure medical tent.

At the Italian Red Cross’ request, the company recently donated two of its booths. Flying them to Europe alone cost over 10 million won, he said, while 500 euros ($540) was covered by the humanitarian aid institution.

“The health and foreign affairs ministries have approached us with plans for providing the booths, along with testing kits, as part of COVID-19 relief to developing countries,” he said. 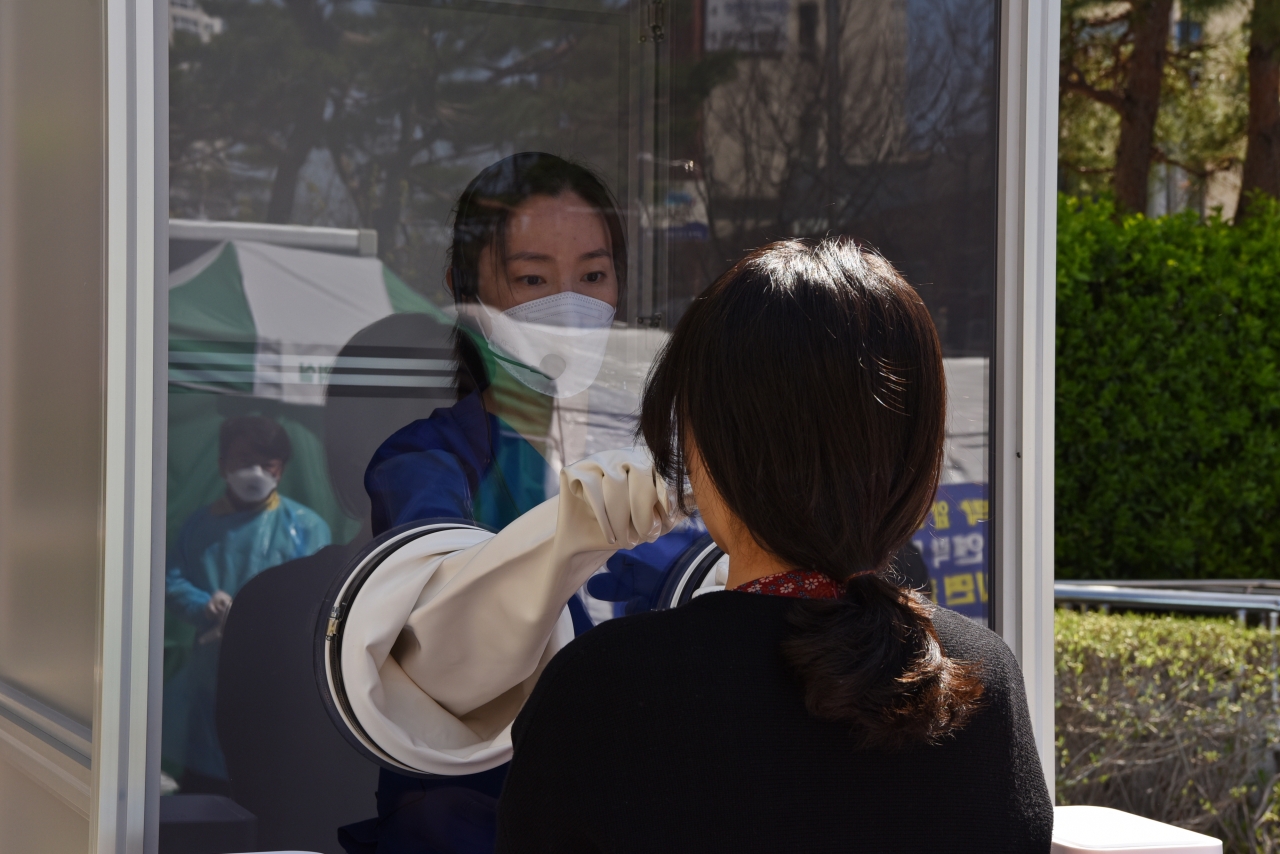 The walk-thru testing booth, designed by Dr. Ahn Yeo-hyun (Courtesy of Dr. Ahn)
“The simple nasal swabs took an exorbitant length of time because of the necessary disinfection and cleaning. I thought there could be a way the tests could be performed more swiftly and safely,” said Ahn in a phone interview.

“I imagine this must be a situation faced by health care workers everywhere -- challenged to think outside the box to cope with extraordinary times.”

Previously, Ahn and her colleagues had to work under full layers of protective gear inside negative pressure tents, doing two-hour shifts.

But with the new booth, which is positively pressured to keep the inside contamination-free, there is less hassle.

A pair of disposable gloves protrude outward through two holes, ready for health workers to wear when they take samples from suspected patients or other individuals wishing to be tested.

Ahn said a medical face mask is the only protection she dons inside the booth, which makes the job less exhausting. Disinfection, which used to take 40 minutes to an hour, can be done in about five minutes.

With summer approaching and no signs of the virus going away, the booth -- which is equipped with power sockets for fans and air circulators -- is expected to prove more convenient, she said.

Another unique feature about the booth is that its air system can alternate between positive and negative pressures.

“For patients who are already sick with the coronavirus symptoms, it’s safer to isolate them inside the booth, which can be converted to negative pressure,” she said.