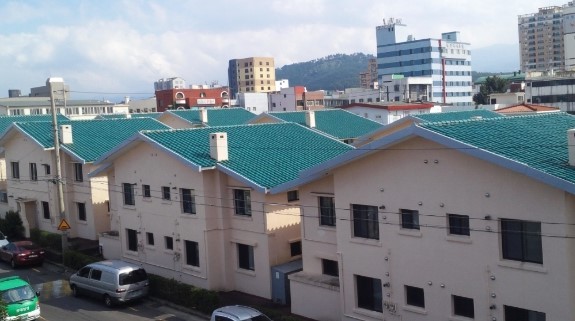 The airline reportedly clinched a contract worth 40 billion won ($32 million) for the complex, which comprises 22 two-story houses on 9,450.9 square meters in the Yeon-dong neighborhood. The buyer’s name has not been disclosed.

The complex was built in 1979 when Korean Air expanded its hotel business in Jeju. The airline said it was currently home to some 100 households, but that all the residents would move out within the year. Those who continue to reside in Jeju will be given housing allowances, it added.

According to Korean Air, the sale is part of its plan to sell noncore assets to improve the airline’s fiscal health and increase corporate transparency.

In February, the Korean Air board announced plans to sell its idle land and building in Songhyeon-dong in Seoul, the Paradise Hotel in Seogwipo on Jeju Island and its 100 percent stake in Wangsan Leisure Development, operator of the Wangsan Marina resort in Incheon, by year-end.

Hanjin Group’s Los Angeles-based Wilshire Grand Center, which includes an Intercontinental Hotel, is also under review for sale, according to the company.