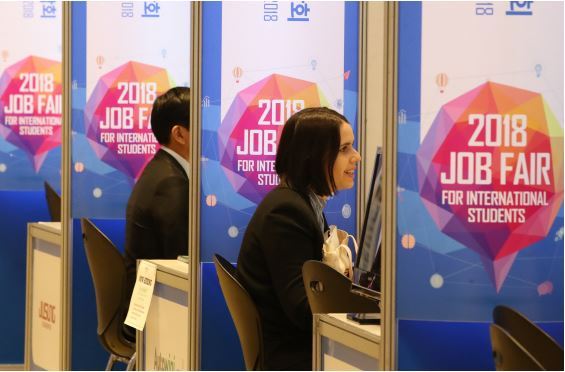 Foreign students participate in a job fair, held at the COEX in Seoul in October 2018. (Yonhap)
SEJONG -- South Korea’s universities were found to have far fewer foreign students in terms of their percentage, while the Education Ministry had unveiled its policy to actively attract students overseas.

Foreign students made up 2.3 percent of the total number of people studying at Korean universities, which is the 33rd among the 36 members, according to the International Student Mobility of 2020 indicator of the Organization for Economic Cooperation and Development. The figures mostly used 2017 data.

Luxembourg, which also has a large portion of foreign residents, topped the list as the country recorded 46.7 percent in the percentage of foreigners in the total students at colleges or universities. 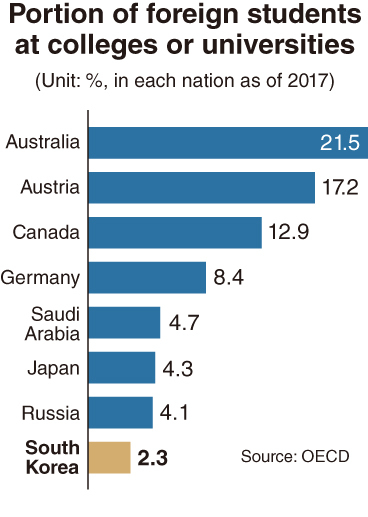 (Graphic by Han Chang-duck/The Korea Herald)
The portion of foreign college students in Eastern European and Baltic nations was also higher than that of Korea -- 12.5 percent in the Czech Republic, 10 percent in Hungary, 8.2 percent in Estonia, 7.4 percent in Latvia, 6.9 percent in Slovakia, 4.6 percent in Lithuania and 4.1 percent in Poland.

The OECD also compared some nonmembers, in which Saudi Arabia posted 4.7 percent, South Africa with 4.3 percent, Russia with 4.1 percent and Argentina with 2.5 percent.

Korea’s Education Minister Yoo Eun-hae unveiled policy in December 2019 that the government would elevate the number of foreign students at local universities and colleges up to 200,000 by 2023. When its goal is attained, the portion of international students could approach 5 percent of the total enrolled.

Some market insiders advise that raising the quality of education should precede the government’s “ambiguous” instruction to universities to attract foreign students without suggesting systematic guidelines.

A Hanyang University professor was quoted by a news outlet as saying that “Japan has been successful in diversifying the nationality of foreign students as its government promoted joint researches between local and foreign elite universities.”

In Korea, some universities had recklessly attracted foreign students without legitimately testing their scholastic ability in an alleged bid to garner higher scores in the Education Ministry’s assessment. This sort of practices has eventually brought about overseas students’ lower acknowledgment in studying in Korea, critics say.

“Korea could possibly be outstripped by China in the coming years in the foreign student portion,” said a university employee in Seoul. “I have seen many cases that both Chinese and other foreign students quit before graduation.”

China, as a non-OECD member, posted only 0.4 percent in the portion. Nonetheless, its schools have huge growth potential, given its government’s enormous investments in the academic sector involving scientific researches.

Education Ministry data showed that the percentage of Chinese of the total foreign students at Korean universities has dropped to below 45 percent, while they accounted for about 70 percent about a decade ago.