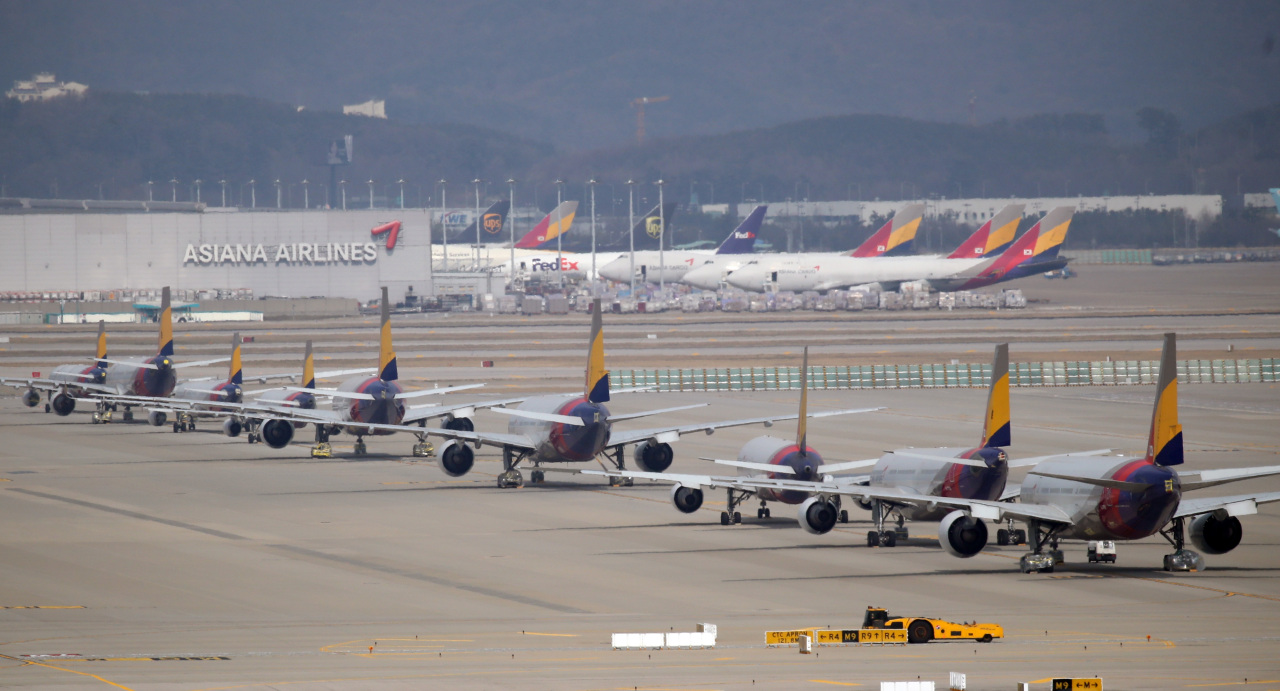 Aircrafts queue up at Incheon International Airport. (Yonhap)
South Korea’s major airlines are likely to suffer a sharp revenue decline due to the coronavirus outbreak, putting further pressure on their liquidity, according to market watchers Sunday.

Flag carriers Korean Air and Asiana Airlines are facing a financial slump as services have been curtailed for now, but they are also facing the possibility of a debt crisis if the pandemic lingers.

The market has been focusing on one of the frequent leveraging measures for Korean airlines, as they immediately need to mobilize cash in the wake of the grim business outlook.

Both have often relied on asset-backed securities to keep their operation normal. ABS or debt securities use credit card receivables or cash income receivables associated with flight routes as collateral.

ABS was often an alternative to corporate bonds for leveraging scheme, with the firms’ ratings hovering just above the junk grade assigned to their corporate bond -- BBB+ for Korean Air and BBB- for Asiana Airlines.

But the terms for the ABS have recently been a headache for both airliners, as the unexpectedly lowered value of the receivables due to shrinking revenue might force early repayment to investors.

While the terms might differ by batches -- regarding receivables and date for regular repayment is -- market analysts expect a significant revenue loss for three consecutive months, which can serve as a “performance trigger,” with investors likely to demand early cash repayment.

The outstanding interest on principal for Korean Air’s won-denominated ABS came to 1.32 trillion won ($1.08 billion) as of end-March. While that of Asiana Airlines stood at 708.8 billion won.

Regardless of the business environment, the case for early repayment has not yet materialized.

“The aviation firms have been taking actions to prevent the performance trigger from being activated so far,” said a high-ranking official of the Financial Supervisory Service.

This comes as the income from receivables has been sharply lowered, with the monthly loss of each round of leveraging ranging from 42 percent to 99 percent in March. The number passengers fell 46.6 percent on-year in February and 91.5 percent in March, according to data from the state-run Korea Airport Corp.

The row is part of the leveraging uncertainties surrounding the firms, as the coronavirus outbreak has essentially wiped off nearly all routes for travelers.

Such uncertainties are expected to linger. Korean Air and Asiana Airlines have effectively been excluded from the direct financial support from the government, as the support focused on low-cost carriers.

In light of this, Korean aviation firms should be on the lookout for a more sustainable way to shore up liquidity, analysts said.

“Korean airlines will invite more capital through investments, selling off assets they have at hand or cutting off expenses,” said Ji Kwang-hoon, a senior credit analyst at Korea Ratings.

Ji added other measures to normalize the instrument would include loans that collateralize their airplanes and commercial bank loans.

In the short term, however, the airliners have managed to buy time to temporarily cope with the situation.

The two firms have added more collaterals to the ABS, secured more cash for reimbursement, and even revised the terms for the securities so that investors can defer to exercise the rights to withdraw their money immediately.

The latest was for US dollar-denominated $350 million worth of the Korean Air’s debt instrument that collateralized the revenue from its North America routes.

While the conditions for early cash release were met, Shinhan Bank, one of the investors in the round, has deferred its rights to get back its outstanding principal and interest until September. The action was based on the revision of terms disclosed in March.

In an apparent bid to normalize liquidity for other batches of ABS, Korean Air raised 600 billion won cash by issuing another round in late March. The flag carrier is also looking to sell noncore assets like properties. Asiana Airlines has also added another revenue source as collateral, such as accounts receivables associated with mileage settlement or revenue from in-flight duty-free services.