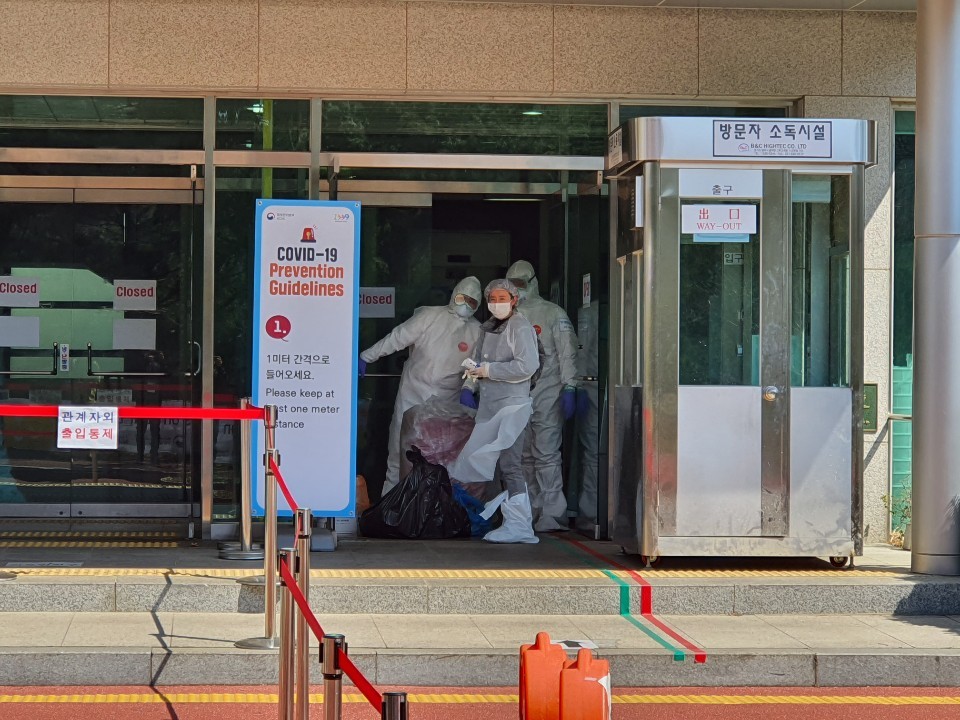 Treatment centers have been set up as a way of easing bed shortages, housing patients with mild symptoms so that more room will be left at hospitals for the severely or critically sick. One such center launched last month in Paju, Gyeonggi Province, is just for foreign patients.

On April 5, a 35-year-old Chinese woman donated some 1.2 million won in cash as a thank you to the medical workers at the Paju center, where she spent 11 nights before making a full recovery.

In a letter she left behind, she said she was thankful for everything and that she wished she could be of help to others the way she received help.

“We put together a foreign patient-only center to cater to different needs they may have like difficulties in communications due to a language barrier,” said Chang Eun-jin, the National Health Insurance Service official who directs the center’s operations.

Seven officials from the state health care service have been dispatched to the center, some of whom can speak more than one foreign language.

“Several announcements are made every day at the center -- every mealtime and before medics make rounds, for instance. Our staff deliver them in English or Chinese,” Chang said.

The center in Paju was originally a dorm for soccer players, and underwent a major makeover before opening its doors on March 25 as a medical facility, he said. An audio announcement system, a situation room and a medical bus with X-ray equipment are among the new additions.

About 50 officials from the Health Ministry, the Environment Ministry, the district police agency, and a nearby military base and disinfection service company, plus seven physicians, four nurses and two nursing assistants are currently deployed to run the 56-room capacity facility.

Since opening about 2 1/2 weeks ago, the center has taken in 21 patients. Three have been discharged after recovering. Two have been moved to hospitals for worsening symptoms.

The center’s head doctor, a neurosurgeon of 18 years, Cho Sung-yun, said when he assembled the seven-member team of physicians the center, he felt “hesitant” about making the offer at first.

“The job meant not seeing your family for a while, working extra shifts after regular office hours at the hospital, a possibility of being exposed to infection. But no one I asked declined and they took the opportunity willingly,” he said.

The medical team is composed of Cho’s colleagues from New Korea Hospital in the neighboring city of Gimpo, where he works. One is a rehabilitation specialist and another is a neurologist -- neither of whom normally treat respiratory illnesses.

“Because this is almost a war-like situation, doctors of all departments and specialties are mobilized for COVID-19 duty,” he said.

The seven doctors split shifts to be on standby for patients 24/7, weekdays and weekends alike. 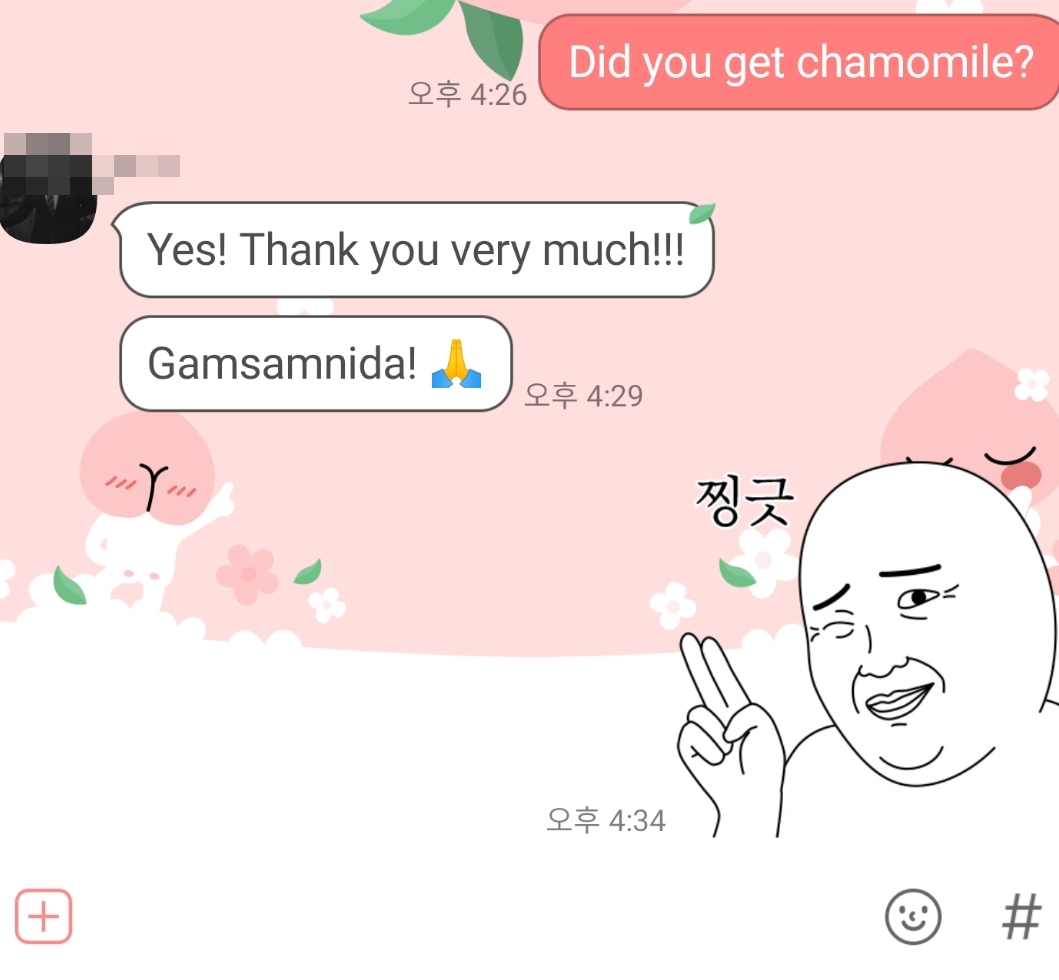 A screenshot of a messenger conversation between a medic at the treatment center and the patient. (courtesy of nurse)
Asked what the hardest part of his job was, Cho said it was informing patients of a positive test result.

“They would go ‘oh my God,’ followed by a pause. It couldn’t make me feel sorrier,” he said.

Patients are tested and have their chest X-rays taken once or twice a week. Testing negative twice in a row qualifies as a recovery.

Cho said as patients cannot leave their rooms, the health care providers and the staffers were only persons they came in contact with while they were there.

Every morning the doctors and nurses would make calls, ask how they were feeling and if they needed anything.

“Imagine being sick alone in a foreign country,” he said, adding, as the center is for milder cases of the disease, emotional struggles may be a harder battle the patients face, away from home and family.

“The National Center for Disaster Trauma offers counseling services, but most experts only speak Korean. Medical staffers have to pay more delicate attention to foreign patients,” he said.

Trying to make the patients feel at home was also his job aside from providing medical care.

But foreign patients tended to cope better than Korean patients, he said.

“Some of the patients say they would be worse off at home. They are grateful to be here.”

Being at the center, there was more bonding with patients than in usual circumstances, said the center’s chief nurse, Jo Hyo-jung.

The center is well-wired and patients and medical staffers have a group chat on messenger application KakaoTalk where they make casual exchanges.

“Two of the patients spent their birthdays here, so we threw them a party,” she said.

Sometimes the patients would make special requests -- for herbal tea, snacks or something to read. The nurses try to have them met.

The patient’s room comes equipped with amenities found at commercial lodgings such as coffee, teas, cup noodles, a hair dryer, an electric kettle and hygiene products. 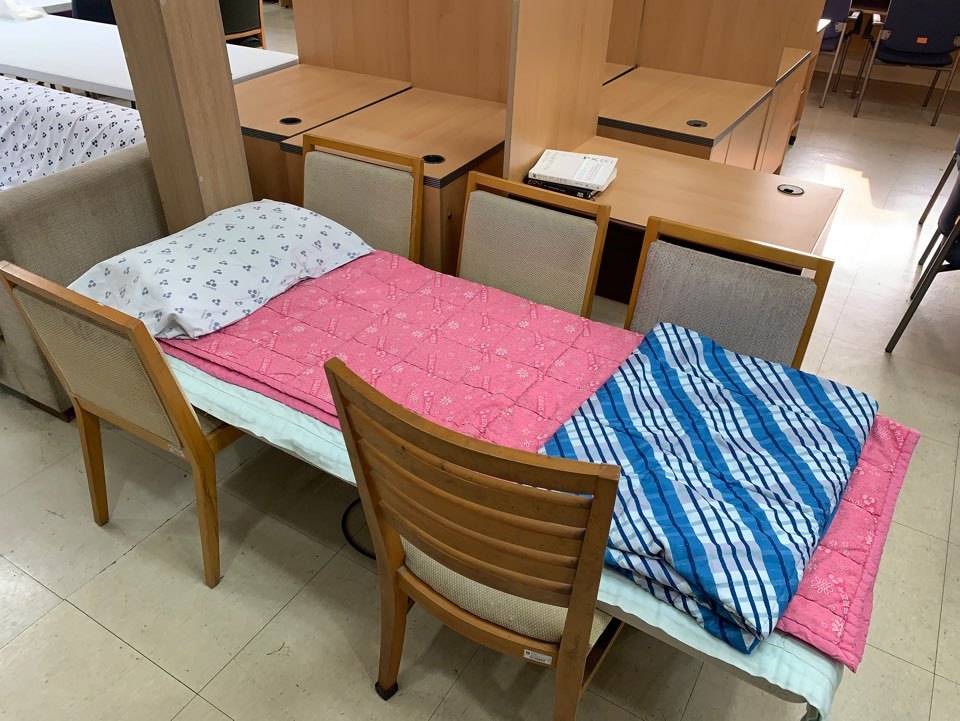 Medical staffers have improvised a bed using chairs to be used while on the night shift. (courtesy of nurse)
In the over two weeks she has worked at the center, she said she only got two days off. Before two nursing assistants and another nurse arrived on Thursday, the three nurses worked over 10 to 12 hours a day. During night shifts, they resort to quick naps in an improvised resting area using chairs as a bed.

To minimize transmission risks, the Health Ministry has rented certain floors of a lodging establishment about 10 minutes’ walking distance away for a total of 60 or so staffers, most of whom have forgone seeing their families for the time they work there.

Safety precautions are strictly adhered to by all staffers. Wearing face masks is required at all times, with disinfection carried out several times a day.

“We never eat out and strictly limit our travel to the center and the motel,” said Chang of the National Health Insurance Service.

Meals come in boxes, delivered three times a day from a local business. Hot food was something of a luxury.

Jo said while she missed being with her family the most, feeling helpful and appreciated by patients was what helped her through the day.

“I knew exactly what I was signing up for when I volunteered. My parents are worried but they understand it is my job to be here, for the patients.”

Health officials dispatched to the treatment center work in the situation room. (courtesy of staffer) 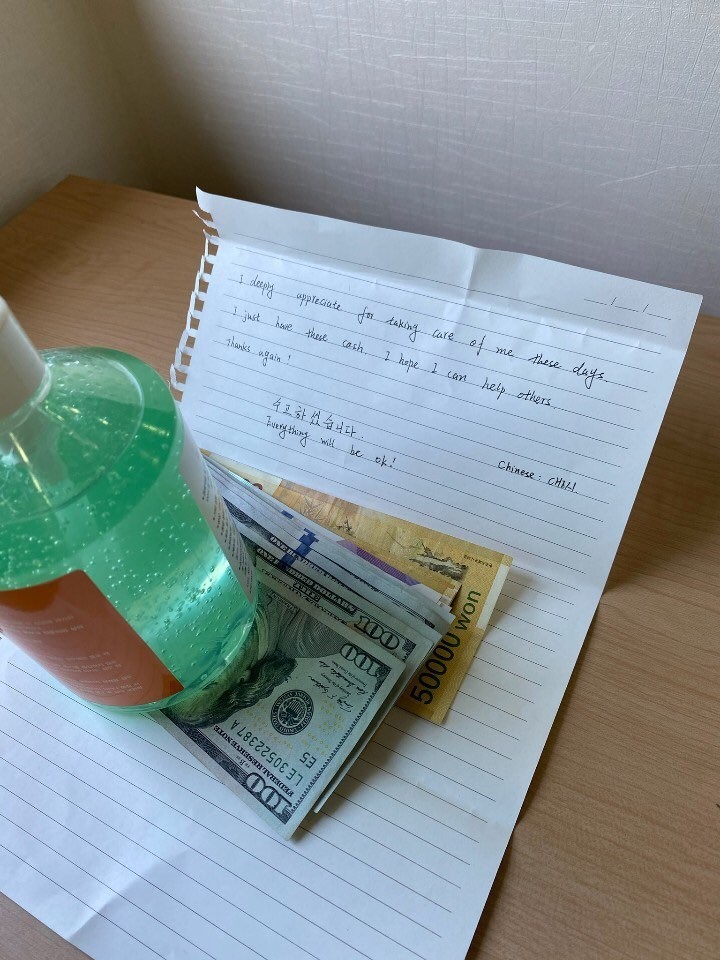 A Chinese patient donated some 1.2 million won in cash as a thank you to the medical workers at the Paju center. (courtesy of staffer)
By Kim Arin (arin@heraldcorp.com)