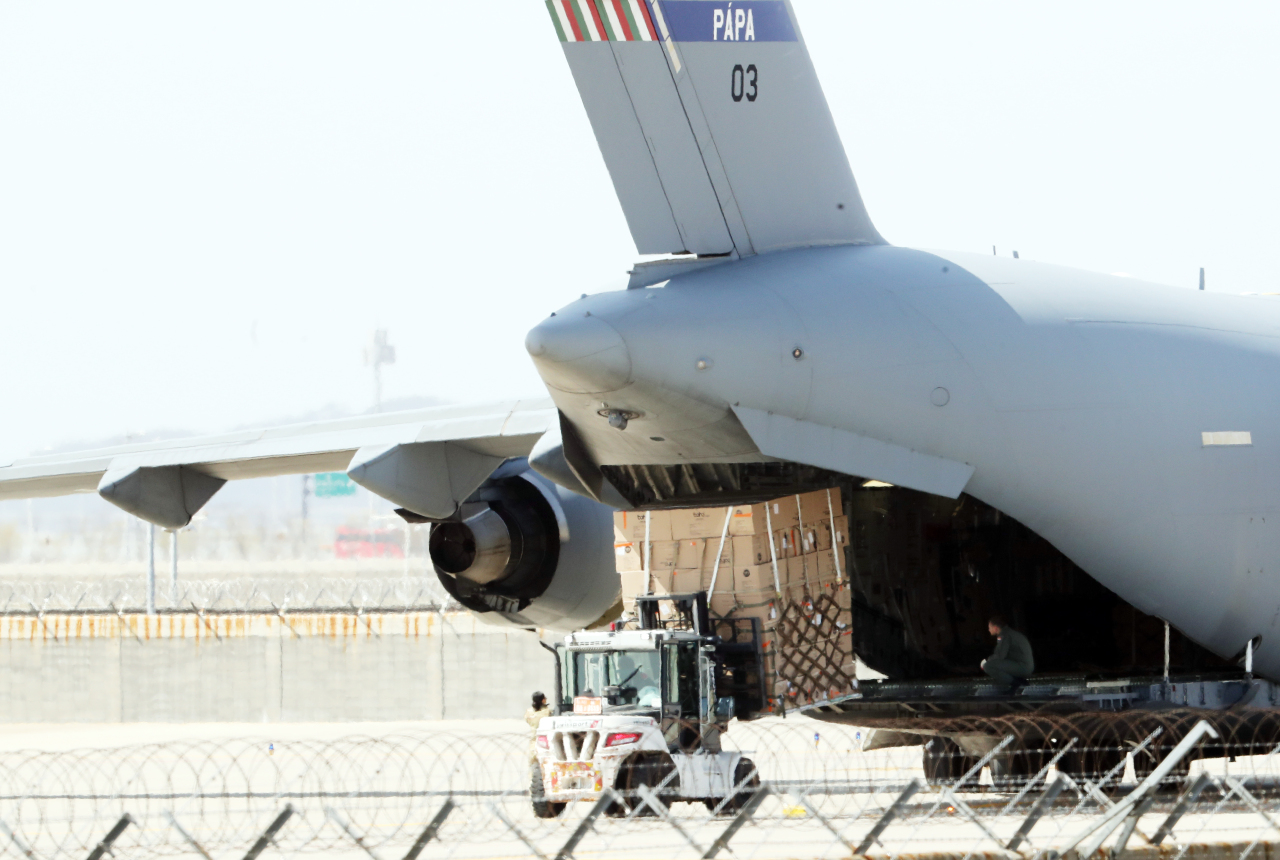 Romania sent NATO aircraft on Friday to carry test kits and hazmat suits from Korea. (Yonhap)
Just last month when South Korea was enduring an explosion of novel coronavirus infections prior to many other areas, it seemed as though the entire world was shutting its door to the country. The Foreign Ministry and its overseas missions at that time were busy dialing up their counterparts and asking them to keep the door open to arrivals from the country.

But lately, as Korea has seemingly managed to flatten the COVID-19 curve in a manner that many countries now hope to duplicate, diplomatic dialogue is mainly about how to get hold of the tools that South Korea is using in its fight against the novel pathogen.

This has put officials in Seoul in a happier but not easier position of having to decide who to help first.

“We are providing supplies in combination of two forms -- commercial sales and humanitarian support,” a Foreign Ministry official said. “When deciding where to send, we consider the requested country’ virus situation, bilateral relations (with Korea), as well as more practical economic or diplomatic interest.”

The ministry official assured it is only shipping its domestic surplus, in mind of the public’s concerns on a potential shortage here.

Coronavirus test kits are most sought after.

So far 117 countries have contacted the Foreign Ministry, asking about ways to purchase them or whether they could be provided in the form of humanitarian aid.

There are over a dozen local companies that manufacture test kits. From the total weekly output, about 3.3 million tests could be sent overseas, when putting aside domestic demand of 280,000 tests a week at maximum.

Of the total 117 nations that expressed their desire to get hold of them, 31 countries were willing to import the supplies. Another 30 were asking for humanitarian provisions. An additional 20 countries expressed wishes to combine paid and donation deals, while 36 others have managed to secure them directly through the private sector.

The ministry, so far, has facilitated three deals, for Columbia, Romania and the United Arab Emirates, which had made requests early on. It sent 51,000 COVID-19 test kits to the UAE, 20,000 to Romania and 50,000 to Colombia. Each kit can be used for 100 tests.

Last week, Romania sent NATO cargo aircraft twice to pick up test kits and other protective gear, such as hazmat suits, from Korea.

As for future deals, the US, the UAE and Indonesia appear to be high on Seoul’s priority list.

“The country we are putting the foremost priority on is the US,” the official said. “There has been a spike in cases in the US and President Donald Trump has made the request himself. Considering the Korea-US alliance, and the fact that the US has not barred the entry of our citizens and struck a currency swap deal, corresponding action is needed.”

Last week, Trump, during a phone call with South Korean President Moon Jae-in, requested medical devices and promised fast regulatory clearance. The US is battling a dire coronavirus outbreak, reporting about 125,000 cases, overtaking Italy and China as the country with the highest number of COVID-19 cases. The death toll in the US stood at around 2,200, as of early Sunday.

The Korean government is seeking to ship more items to the UAE, considering the width and depth of bilateral cooperation in various sectors, as well as to Indonesia, which is a key partner in Seoul’s New Southern Policy. The New Southern Policy is President Moon’s initiative seeking to elevate strategic ties with the 10-member Association of Southeast Asian Nations.

Iran, one of the countries hardest hit by COVID-19, also requested 3.2 million test kits and other quarantine supplies. But due to severe economic sanctions placed on the country by the US, it is difficult for Korean firms to conduct economic transactions with the Middle Eastern country.

The ministry said it is in talks with the US and other related countries seeking ways to send the items, possibly as humanitarian aid or through other transaction methods.

Test kits were among the most important weapons in South Korea’s virus fight. Mass testing, diagnosing and subsequent early treatment and quarantine helped the country slow the spread of the virus from over 900 new infections a day to around 100 in recent days.

That strategy was only possible because the government, after the first virus case was reported in the country in January, urged research labs and biotech companies to develop diagnosis tests and authorized their use in just two weeks. When cases spiked, the government could quickly get tens of thousands of people tested.

The test processes samples and gives results in as little as six hours, with the accuracy rate standing at 98 percent, according to the Korea Society for Laboratory Medicine.

On Sunday, Korea reported 105 new cases, putting the nation’s total at 9,583, with the number of full recoveries to exceed 5,000, according to the Korea Centers for Disease Control and Prevention. The death toll marked 152.