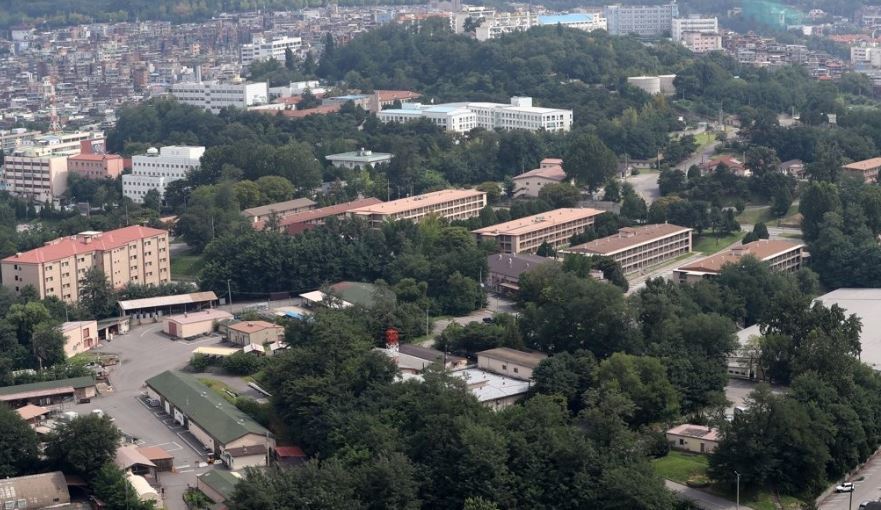 Yongsan Garrison, the old headquarters of US Forces Korea before it relocated to Pyeongtaek, Gyeonggi Province, is seen from the air. (Yonhap)
An apartment complex located inside the Yongsan Garrison -- US Forces Korea headquarters before its relocation to Pyeongtaek -- will be temporarily open to public from April 28, the Land Ministry said Wednesday.

It is the first time the public will have access in 116 years.

In 1904, the Japanese military established its headquarters in Yongsan, central Seoul, after the Russo-Japanese War. In 1957, USFK moved in after the end of the 1950-53 Korean War. Since 2017, the US military has been moving out under the USFK relocation scheme upon a summit agreement in 2003.

In 1986, the USFK had returned the apartment complex to the South Korean government but has been renting the place since then.

According to the ministry, the official opening of the complex will be in July, but may be delayed due to the latest outbreak of COVID-19.

Authorities said they decided to temporarily open the complex in April by inviting some 400 citizens for public opinion on how to use the place.

Of the apartment buildings 4, 5 and 7, building 5 will be open to public, authorities said.

Land Ministry officials are reportedly discussing on installing a display on the history of Yongsan Park.

Earlier, the authorities proposed a plan to operate the apartment complex as short-term lodging and a library. But it was pushed back after finding out that Yongsan Garrison has been registered as a natural green protection zone.