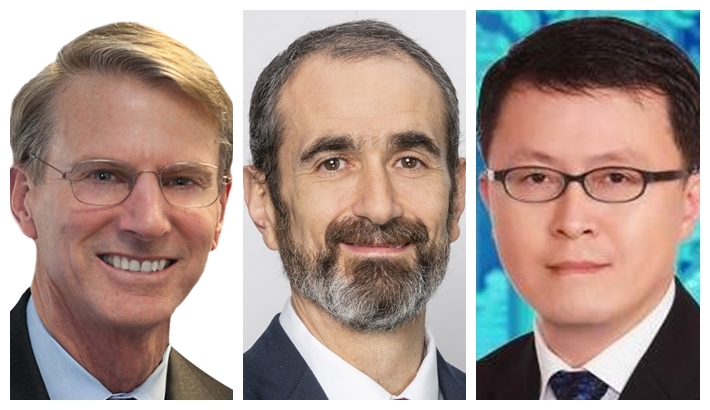 From left: Moody’s Analytics chief APAC economist Steve Cochrane, S&P Global Ratings chief APAC economist Shaun Roache and CGS-CIMB global head of Technology Research Peter Chan
The Korea Herald is publishing a series of interviews and analyses on the looming threat to the domestic economy from COVID-19. This is the second installment. -- Ed.

The impact of the fast-spreading novel coronavirus on the global economy is far harder than projected, greater than the previous pandemics in the modern era.

The latest virus outbreak is likely to trigger an economic recession globally -- more so in South Korea, which is heavily dependent on exports for its growth. Market watchers are of the view that the economy will contract.

“The probability of a global recession has risen substantially over the last two weeks. The Asia-Pacific region is now heading for a recession, which we would define as two quarters of growth well below trend and rising unemployment,” Shaun Roache, chief APAC economist at S&P Global Ratings, told The Korea Herald.

“Korea will almost certainly enter a deep, but temporary recession, in the first half of 2020 with at least one quarter of negative growth. Our current forecast is 1.1 percent growth this year, but this is now subject to very large downside risks.”

“It’s not a question anymore. Similar to Taiwan, an export-oriented economy, Korea may not fare well in this downturn,” he said. “Its top three customers such as China, the US and EU nations have rapidly diminishing economic activities.”

The next big worry is plummeting consumer demand, said Steve Cochrane, chief APAC economist at Moody’s Analytics, highlighting that it could cause the biggest disruption in supply chains ever.

“It is hard to know whether contagious diseases per se will emerge as a bigger threat, but the current situation shows how any global disruption to the economy can create a greater multiplier effect than in the past,” he said. “It is likely that global diversification of supply chains will be the next move among global manufacturers.”

When asked about market criticism concerning the Bank of Korea’s belated rate cut, Cochrane said the central bank seems to be hesitant to move without further easing of policy by the US Federal Reserve, given that the rate was already at a record low.

Following the Fed’s emergency action, the BOK on Monday slashed the base rate by 50 basis points to a record low of 0.75 percent, weeks after deciding to leave it unchanged.

But the emergency rate cut, which brought the nation’s base rate close to zero, is likely to be less effective in countering the COVID-19 shock than it would have been in the face of a typical business cycle recession, said Roache.

“Lower interest rates can cushion the blow but they will not encourage firms and households to raise their spending until they see clear evidence that the virus is contained globally. At the same time, many central banks are running out of conventional policy space,” he said, adding that the BOK might start a quantitative easing program this year.

Stressing the limited impact of rate cuts, economists urged authorities to take more active fiscal measures so that risk premiums and volatility would continue to rise.

Governments around the world have been pumping out a series of fiscal measures to ease market pressure over fast-growing uncertainty.

The US administration said it wants to send direct cash payments of $1,000 (1.24 million won) to each American as part of a massive economic stimulus package. The International Monetary Fund on Monday said it “stands ready” to use its $1 trillion lending capacity to help countries around the world that are struggling with the humanitarian and economic impact of the virus. Korea’s parliament has also approved an extra budget of 11.7 trillion won to shore up vulnerable businesses and domestic consumption.

“If the effectiveness of fiscal policy is limited, a combination of an additional fiscal package combined with monetary policy easing could be expected,” Cochrane said. “The target has to go toward small and medium-sized firms to ensure that all sectors of the economy are supported by government policy while the economy remains weak.”

“Fiscal policy could prove more effective than monetary policy. If the latest stimulus fails to cushion growth, we would expect further fiscal easing. While this will have implications for the deficit, it could help prevent a deep and persistent recession and prevent inflation falling below zero,” Roache said.