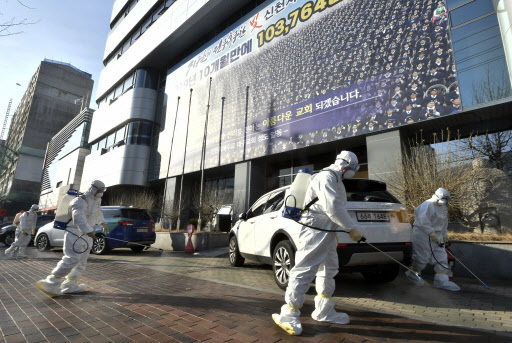 (Yonhap)
Eight in 10 coronavirus cases in South Korea have been linked to cluster infections, health authorities said Saturday, as the recent trend of spread shows a continued slowdown.

Despite the slowdown in Daegu and North Gyeongsang Province, the areas hit hardest by the virus outbreak here, authorities are grappling with the new clusters including a call center in southwestern Seoul and the administrative city of Sejong.

Korea reported 107 new cases Saturday, bringing the number of infections to 8,086. The death toll rose by five to 72, according to the Korea Centers for Disease Control and Prevention.

Of the country’s total cases classified as tied to clusters of infections, 62 percent are traced to a branch of the fringe religious sect Shincheonji Church of Jesus in Daegu, KCDC officials said.

Among a total of 238 cases in Seoul, 74.4 percent are tied to clusters, with the call center in a 19-story building in Guro-gu being the biggest cluster of infections. Among the cases linked to the call center, 74 out of 115 people were from Seoul.

In North Gyeongsang Province, which surrounds the southeastern city of Daegu, 72.9 percent of the cases there are tied to clusters. Of the province’s total cases, 841 cases, or 73.9 percent, are linked to the Dagu branch of the Shincheonji church, followed by Cheongdo Daenam Hospital Cheongdo country in the province (119), a nursing home in Bonghwa country (58) and a group of tourists who made a pilgrimage trip to Israel. (49)

‘Small-scale virus transmission centering on workplaces, churches, internet cafes and medical facilities continue to occur,” said Kwon Jun-wook, an official from the KCDC, at a briefing on Saturday, asking for stepped-up measures to prevent the spread of the virus in such facilities.