South Korea confirmed 594 more cases of the novel coronavirus overnight to push up the total infections to 2,931 on Saturday morning, as the government stepped up testing for members of a controversial Christian church at the center of the spread of the country‘s virus outbreak. 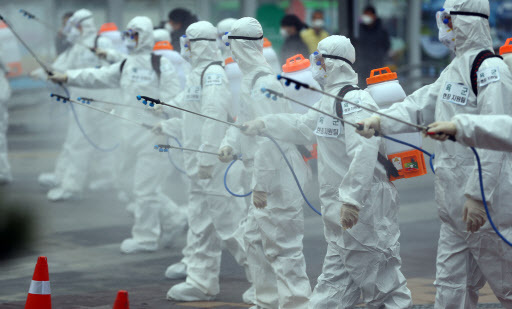 (Yonhap)
Health authorities said at a regular briefing that the coming days until early March are critical for the country’s efforts to contain community spread of the fast-spreading virus.

Of the newly identified cases, 476 cases, or 80 percent of the total cases, were reported in the country’s southeastern city of Daegu, according to the Korea Centers for Disease Control and Prevention. Some 60 were from North Gyeongsang Province surrounding Daegu and 12 each from Seoul and Busan.

“The proportion of confirmed cases among members of the Shincheonji Church of Jesus’ Daegu branch is considerably high,” Health and Welfare Vice Minister Kim Gang-lip said at the briefing, adding the number of cases from Daegu was expected to continue to rise quickly in the coming days.

The country’s containment efforts are being focused on testing some 210,000 members of the Shincheonji Church, with the general health status of 88 percent of them having been checked. Of them, 3,381, or 1.9 percent, had symptoms and the rest did not, Kim said.

More coronavirus cases are likely to be confirmed among members of the secretive religious sect’s Daegu branch - both among those who are symptomatic and asymptomatic, he added. Some 53.1 percent of total cases are traced to the Daegu branch, according to government data.

Daegu, the epicenter of the country’s COVID-19 spread, has accumulated 2,055 confirmed cases in just 10 days since the first case was reported.

The city’s hospitals are facing an overcrowding crisis. Some 1,300 patients are in quarantine at their homes waiting to be admitted to hospitals, according to the municipality.

Fueling concerns that a lack of hospital beds could lead to more deaths, two people are thought to have died from the coronavirus in the country while under quarantine at their homes waiting to be hospitalized.

“The number of hospital beds we can secure falls far short of the speed of the increase in the number of patients and we severely lack medical staff members at the scene,” Daegu Mayor Kwon Young-jin said at a briefing, adding the city already reached its limit in capacity.

Daegu secured 1,329 additional beds, with 488 patients to be admitted to hospitals over the weekend, according to the municipality.

All 900 kindergartens, elementary, middle and high schools and special educational institutes in Daegu have postponed the start of a new spring semester by two more weeks to March 23.

Kwon Jun-wook, director of the National Institute of Health, at a briefing reiterated the need for “social distancing,” asking Koreans to refrain from going outside, attending mass gatherings and religious services.

As of Saturday morning, 16 people have died in Korea from the coronavirus, with most of them in their 60s and 70s. All of them had preexisting medical conditions including cancer, heart and liver diseases, according to the KCDC.

Based on the analysis of Korean patients, the KCDC said 80 percent only had mild symptoms and did not require medical treatment. Some 20 percent needed medical treatment, 5 percent of which have preexisting conditions and require extra care.

The country has tested a total of 82,762 suspected cases as of Saturday morning, with 52,608 having tested negative. Some 29,154 people are still awaiting results.

The government said it would prioritize limiting the number of deaths by concentrating resources on those with severe symptoms. As part of such efforts, it is working to create a system under which patients are classified in four categories based on the severity of their symptoms so that those urgently in need of medical treatment can be admitted first.

Amid coronavirus fears, over 70 countries imposed entry bans, travel restrictions or advisories, or tightened quarantine measures on Korean nationals as of Saturday morning, according to the Foreign Ministry, with Malaysia and Lebanon being the latest to do so.

An Asiana Airlines flight that took off from Incheon Airport turned back while en route to Hanoi, Vietnam, Saturday after the Vietnamese authorities prevented it from landing in the country’s capital.

More than 84,000 cases have been reported, affecting every continent except Antarctica, pushing the world closer to a pandemic. Italy and Iran have emerged as major clusters outside of China, with more than 820 and 380 cases confirmed, respectively.

The World Health Organization said the outbreak increased the global risk from the outbreak from high to very high, with the director-general warning it could go in “any direction.”