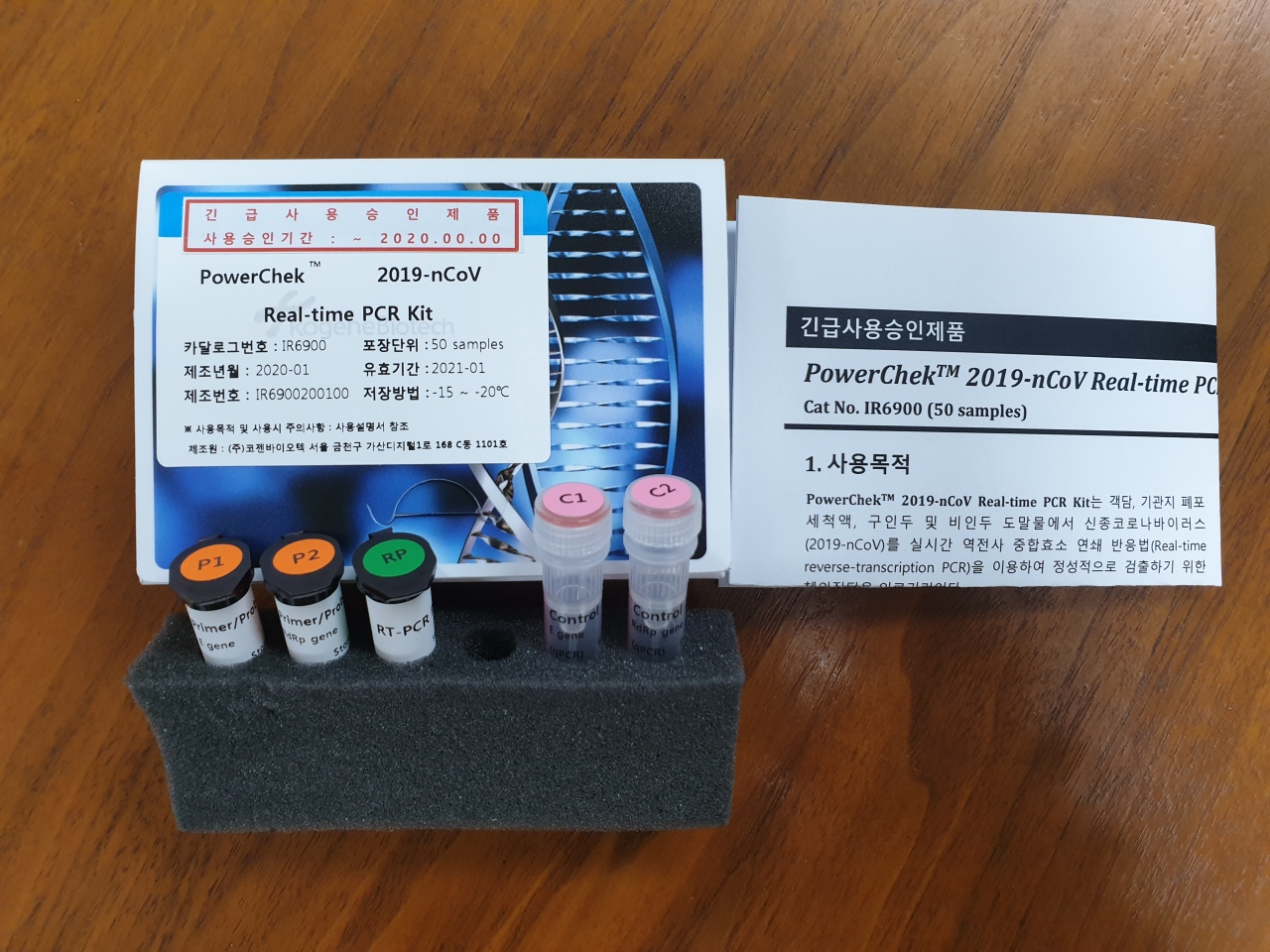 COVID-19 testing kit (KCDC)
When dealing with an infectious disease with no available vaccine or treatment, the only containment strategy is testing and diagnosing suspected cases fast and isolating confirmed patients, according to Korean medical experts on Tuesday.

Addressing a press conference, six medical societies developing, conducting and quality-controlling tests for the novel coronavirus COVID-19 said as many as 15,000 tests can be done in a day by around 12,000 specialists at 77 medical institutions across the country.

The Korean Society for Laboratory Medicine’s Director Kwon Kye-chul said the society and an association of external quality assessment services screen hospitals and health institutions before they are certified to test patients for the virus.

“We send a mix of about seven positive and negative samples to each institution applying for the certification, and only those who identify all of them correctly are approved to carry out virus tests,” he said, adding that 46 institutions out of 52 that applied passed in the first round, and 31 out of 38 in the second.

“There has been a surge in confirmed cases in the past week, which, from a different perspective, indicates that our system is capable of tracing and testing suspected patients promptly as they come,” he said. 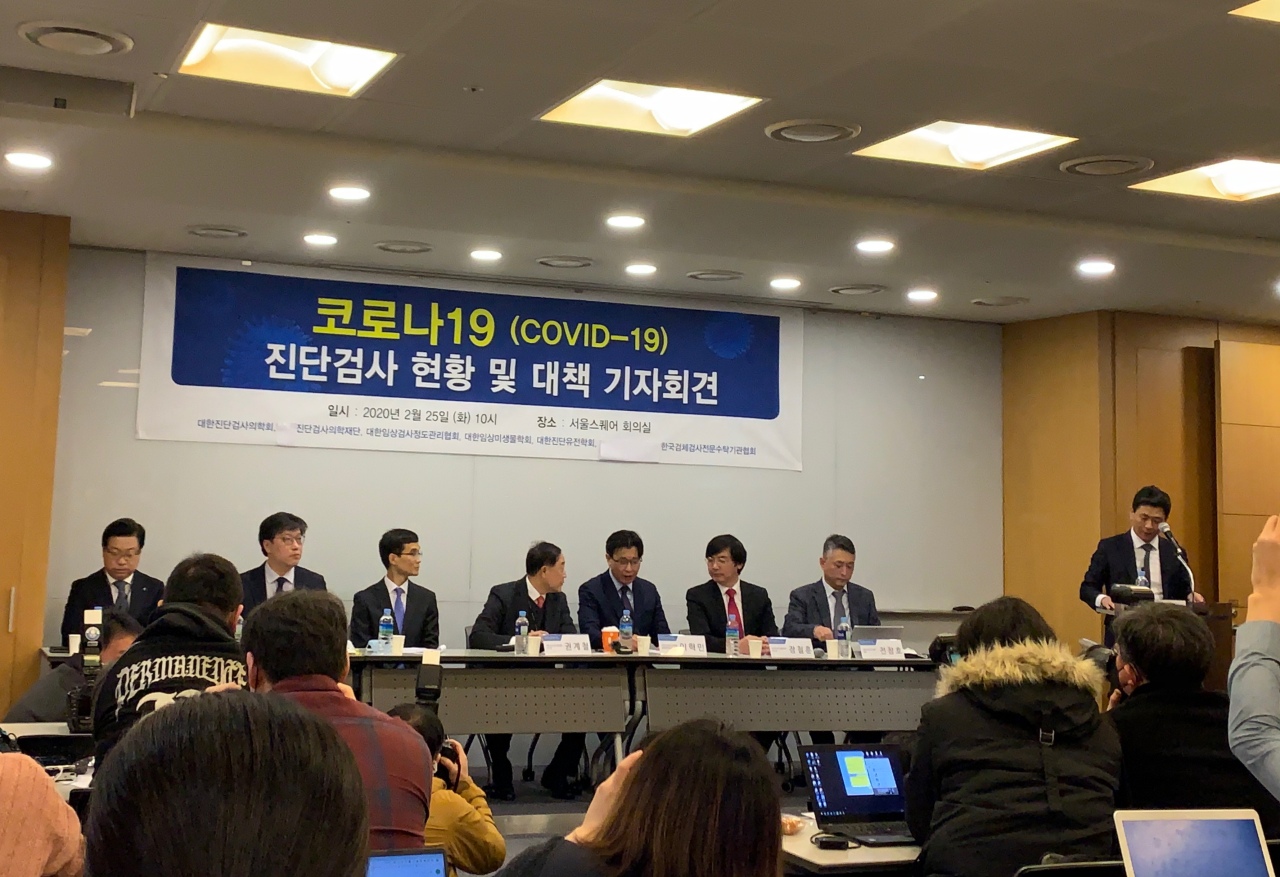 Representatives from six medical societies, including the Korean Society for Laboratory Medicine, Korean Society of Clinical Microbiology and Korean Society for Genetic Diagnostics, speak during a press conference Tuesday at Seoul Square in the city’s central district. (Kim Arin/The Korea Herald)
According to the society, 39,279 samples from 24,248 persons had been tested as of Saturday.

Sung Heung-sup, a laboratory medicine professor at Asan Medical Center in Seoul, said the current COVID-19 testing kits were “beyond expectation” in terms of specificity and sensitivity.

But in stages when the amount of virus in the body remains low, a patient may test negative even as he or she may actually be infected, he said, explaining this was not due to a fault in the testing kit’s accuracy.

“A patient is usually tested multiple times, with each lasting for about three to four hours -- longer if it’s at a public health center,” he said.

He said the disease surveillance system was “preemptive” in that it was scanning and discovering patients early on.

Lee Hyuk-min, infection control affairs director at Severance Hospital’s department of laboratory medicine, said the medical groups have been speaking with the Korea Centers for Disease Control and Prevention starting from mid-January to brace for a potential outbreak here.

“Korea is situated close to the focal region of the outbreak, making it likely to be hit,” he said. “The discussions with government for developing testing kits, having them authorized by the Food and Drug Safety Ministry, increasing testing capacity (and) training specialists officially began on Jan. 17.”

Lee said the KCDC should revise its policy to make testing compulsory for those with symptoms or people who have interacted with others confirmed infected.

“A lot of the cases that are emerging are without clear epidemiological links,” said Chun Sail, a pharmacogenomics specialist at Asan Medical Center.

“During the incubation period -- now thought to be as long as 24 days -- a patient may show only mild symptoms, but could still be infectious,” he said. “We can’t quarantine every symptomatic individual, which is why early detection is so important.”

“For a contagious virus that has no cure, diagnosing patients quickly and then isolating them is virtually the only sure way to control the spread,” he said.