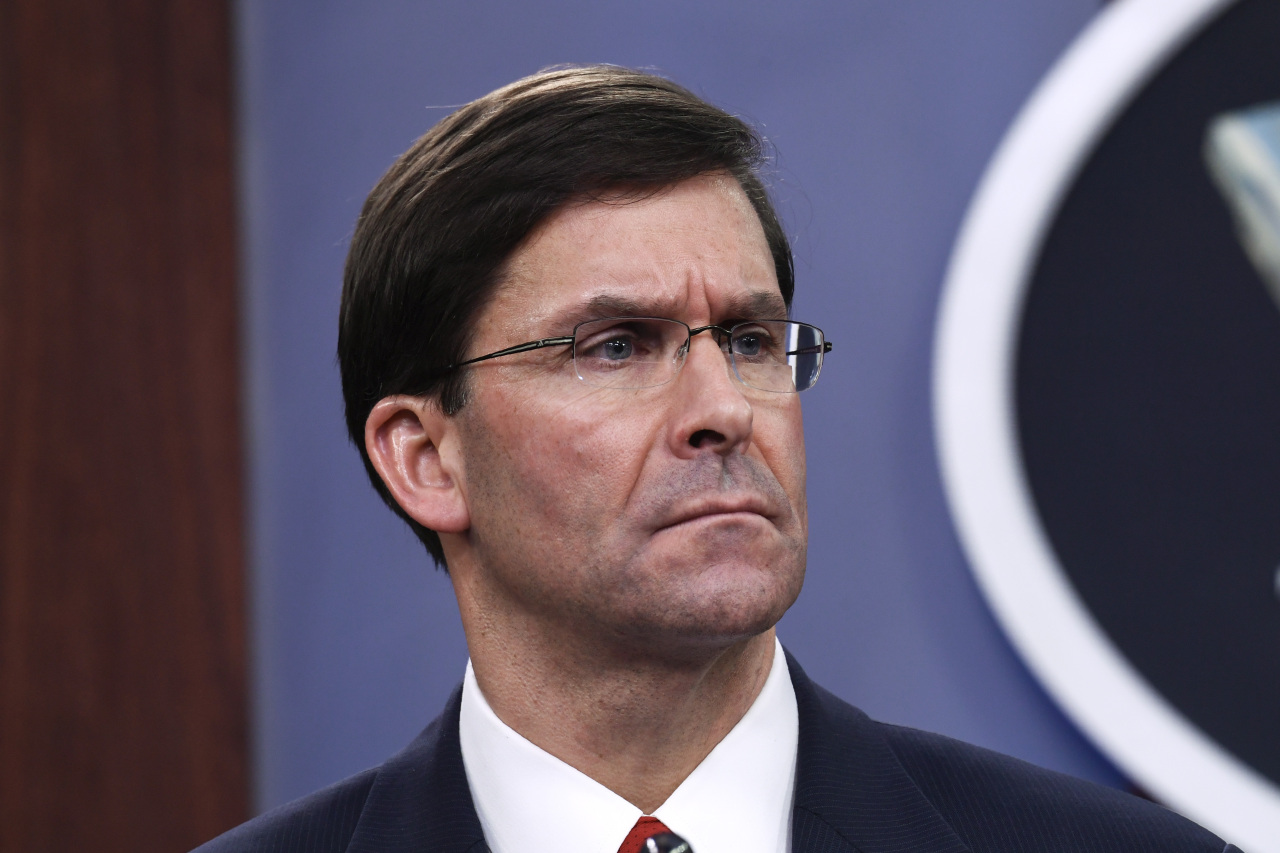 Esper, speaking at a joint news conference after talks with South Korean Defense Minister Jeong Kyeong-doo, also said that the two countries are considering scaling back combined military exercises due to concerns about the new coronavirus spreading in the South.

"General Abrams and General Park are looking at scaling back the command post training due to concerns about the coronavirus,"

Jeong said the two generals are looking into the "serious" situation caused by the coronavirus but stopped short of confirming Esper's remarks. The allies will decide how to conduct the exercises after completing a joint assessment, he said.

The two countries have been negotiating a new Special Measures Agreement to split the cost of the 28,500-strong U.S. troop presence in South Korea, with Washington demanding a significant increase in Seoul's contributions.

"Shouldering the cost of our common defense cannot fall disproportionately to the American taxpayer," Esper said. "As such, we must find a more sustainable and equitable means of sharing the costs of our combined defense with the Republic of Korea.

"As a global economic powerhouse and an equal partner in the preservation of peace on the peninsula, South Korea can and should contribute more to its defense," Esper said.

The US has argued that South Korea should cover other costs too.

"The current Special Measures Agreement captures only a portion of the overall cost associated with the United States' defense of South Korea," Esper said. "The United States believes it should cover more. While much work needs to be done to bridge the gap between our two sides on the 11th SMA, we had a productive and candid discussion on this topic today. The United States remains fully committed to reaching a mutually beneficial and equitable agreement that will strengthen the alliance and our combined defense long into the future."

The US defense secretary added that if no deal is reached, the 9,000 South Korean workers on US military bases will be furloughed in April as planned.

Jeong acknowledged that differences between the two countries remain and expressed hope for a speedy resumption of the negotiations.

He said he spoke with Esper about ways to ensure that Korean workers are not furloughed.

"I requested that the USFK first provide assistance through their budget, and if that's not possible ... that (we) first reach a deal on salaries, even if conditionally," the minister said.

Jeong also stressed that South Korea has made contributions outside the framework of the SMA, including by setting aside $43 billion for this year's defense budget.

That budget, he said, will help improve South Korea's capabilities to respond to nuclear and weapons of mass destruction threats, and contribute to international efforts for peace and stability.

Later, a senior South Korean government official told reporters that Seoul has set a higher rate of increase in its contributions than previous years. That suggests South Korea is looking at more than the 8.2 percent increase it agreed to under last year's SMA.

"More than anything else, the biggest difference in views between South Korea and the US is over the total amount (of Seoul's contributions)," the official said on condition of anonymity.

Meanwhile, Esper said there are no plans at this time to redeploy the Terminal High Altitude Area Defense battery in South Korea.

The US had earlier mentioned the possibility of moving the anti-missile system's launchers from their current site in Seongju to other parts of the country to improve operational flexibility.

"The most important thing that we discussed is the criticality of opening the ground line of communication," Esper said, alluding to the current supply of resources by helicopter to avoid clashes with residents opposed to the THAAD deployment.

"For 30 months now, US-ROK soldiers have been denied the ability to get resupplied and fitted through a ground line of communication. I don't think it's right or appropriate," he said.

"They need these assets to take care of their health and safety and welfare." (Yonhap)