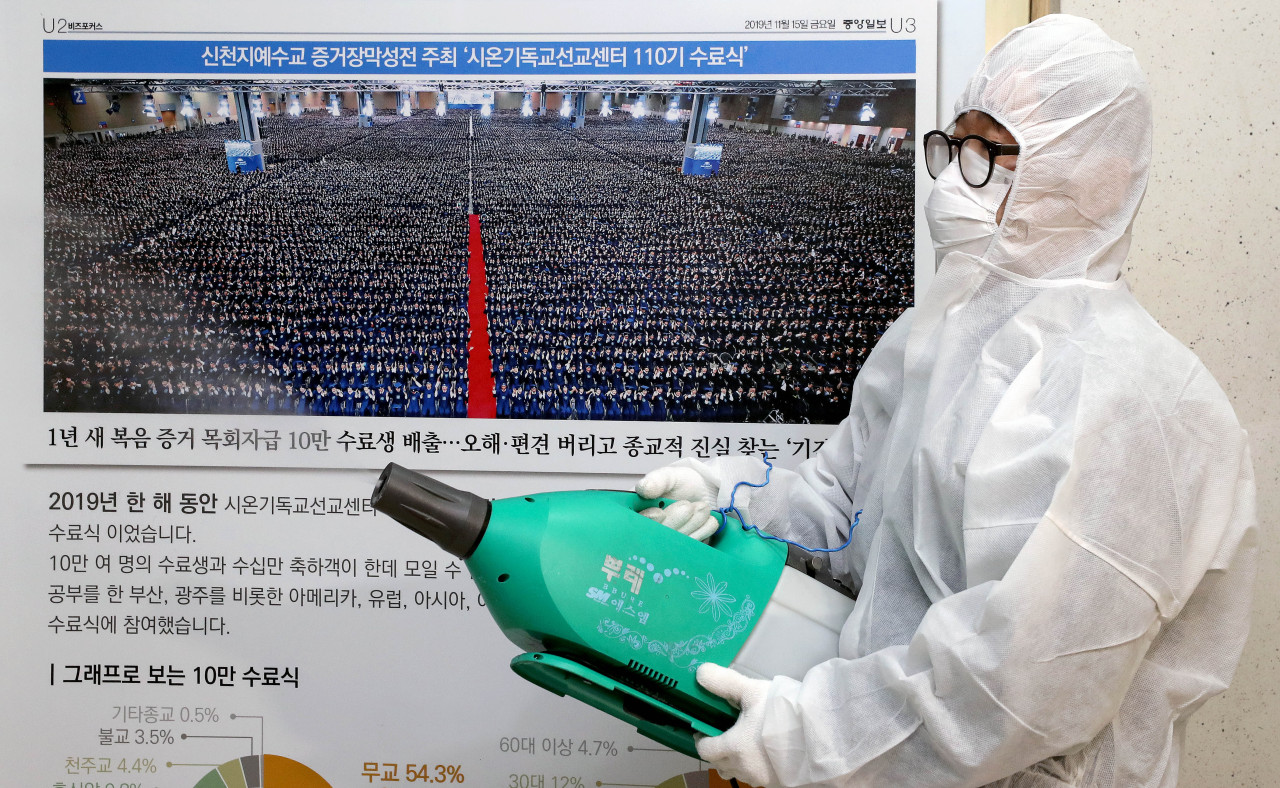 Hundreds of thousands of South Koreans have called for the forcible dissolution of the Shincheonji Church of Jesus, Temple of the Tabernacle of the Testimony, a shadowy Christian sect that has been identified as a hotbed of new coronavirus infections.

Over 552,000 people have signed an online petition to that effect since Saturday, when it was filed on the website of the presidential office of Cheong Wa Dae. Any petition that gets more than 200,000 signatures within a month requires an official response from Cheong Wa Dae.

The opaque group, which claims to have over 240,000 followers, has come into the spotlight as the majority of COVID-19 cases were traced to its branch in Daegu.

As of Monday morning, 456 people linked to the sect tested positive for the virus, accounting for 59.8 percent of the country’s 763 cases. The tally rose to 833 in the afternoon, but it was unclear how many of the new cases were linked to Shincheonji.

Public uproar intensified as health authorities said they were struggling to reach out to Shincheonji members in Daegu but hundreds had not responded.

The person who submitted the petition criticized Shincheonji for violating the people’s rights and freedom by propagating its religion in indiscriminate and deceptive ways for the sake of its leader. The leader and self-declared messiah, Lee Man-hee, called the spread of the virus “a devil’s deed” in internal messages to the laity.

“The infection crisis occurred in Daegu and North Gyeongsang Province, which stemmed from the church’s Daegu branch … because of its immoral religious dogma and uncooperative attitude,” the petitioner wrote in the complaint posted on the Cheong Wa Dae website.

Citing news reports, the petitioner claimed the church had ordered its members to obstruct epidemiological investigations and quarantine efforts by the city government and health authorities.

In response, the government is investigating to determine whether Shincheonji has violated any laws related to public health and infectious disease, according to the newspaper Herald Business.

“The Ministry of Justice and others are closely examining the situation. We have yet to find illegality such as a breach of the law on the prevention and management of infectious diseases,” an official with the presidential office was quoted as saying in the paper on Monday.

On Sunday, Shincheonji spokesperson Kim Si-mon said its 1,100 churches and annex buildings nationwide had been closed and its 245,000 members had been instructed to refrain from external activities.

It released the full list of locations and addresses on its homepage, but the Daegu and Gyeonggi provincial governments said the list didn’t match their records and the information required further confirmation.