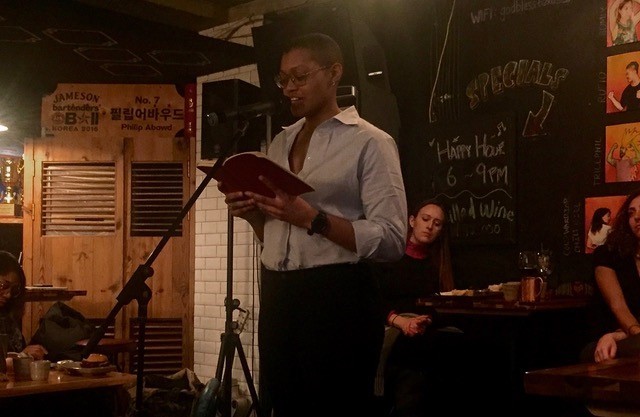 Erica Butler performs her poetry at Wordsmiths’ February event. (Jack Ryan/The Korea Herald)
On the surface, Wordsmiths is like any other open mic event, providing a space for writers to share their poetry, prose and music.

But a swift dig beneath the surface reveals a community of warmth, mutual support and acceptance.

Wordsmiths’ events are held on the second Sunday of each month at Southside Parlor in Itaewon, organized by three of its members -- Kang Yea-hwon, Grace Kim and Brendon Spencer -- in their spare time.

Spencer, Wordsmith’s resident DJ, has been involved since 2012, making him the longest continuing member.

“I’ve been in the show for so many years and I’ve seen people grow up,” he told the Korea Herald at a monthly event on Feb. 9. “Everyone is free to push themselves, explore themselves and share with everyone.”

A distinctive quality of Wordsmiths is the community aspect of the group. It functions as a two-way street: The stage is a space to express oneself, while audience members have the opportunity to understand other’s ideas and perspectives.

The act of getting on stage can be a triumph in itself for those who struggle in front of crowds or find it difficult to be vulnerable.

“It was so nerve-wracking, but also so exhilarating at the same time, because normally when I write I just write for me, and so it was really empowering to read in front of such a supportive and loving crowd,” said Jenala Jones, performing at Wordsmiths for the first time.

The silence from the audience was noticeable when Jones performed a poem about learning to love her natural hair as a black woman.

A performer’s nerves are an excuse to build them up and encourage them. When Lee Si-young -- stage name Z -- stepped on the stage, his first words were, “I’m very nervous.” Without missing a beat, a rallying call of “We support you!” rang back from the crowd.

For Boipelo Seswane, a spoken-word performer, this is what makes Wordsmiths special. “(It is) a place of being vulnerable, open and connecting with the world around you and yourself in ways that are good and strange and awesome,” she said. First-time host Monique Claiborne had been coming for over a year, but said she “didn’t feel like an outsider even when I came my first time.”

Perhaps it is the outsider status of its members that gives Wordsmiths its flavor. Consisting predominantly of expats, each month brings with it new stories, perspectives and belief systems. However, this structure also presents organizational challenges. As those foreign residents leave Korea to return home, Wordsmiths loses the members who understand how to maintain its culture and character.

“Seoul is an international community that keeps rotating. So there’s always new faces, but also old faces that happen to leave, and I just wanted to hold space for that and allow people to come in and out,” said Kim on what motivated her to take on an organizing role.

Jess Kroll is one of these expats. Kroll last performed at Wordsmiths in 2013 and when Spencer heard he was back in town, he encouraged the former member to attend again. For Spencer, seeing friends like Kroll return is telling of Wordsmiths’ character.

“(People) really find themselves through this show, through this community,” he said. “It’s a beautiful thing. It’s more than an event.”