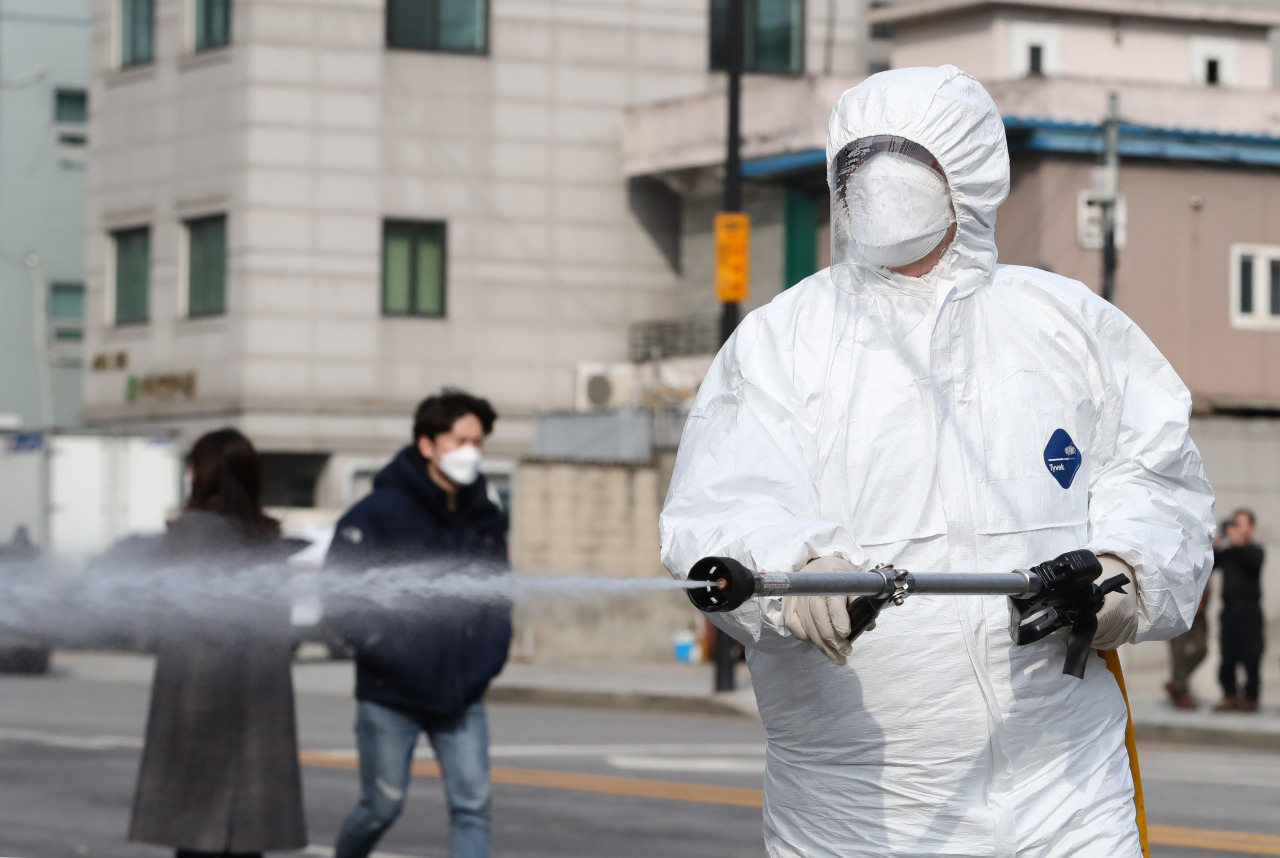 Disinfection work underway on the streets at Seoul`s western district of Seongdong on Wednesday (Yonhap)
A series of novel coronavirus cases without epidemiological ties to previous patients have been reported in Korea in the past four days, with one believed to be linked to at least 15 others.

A Korean woman, 61, who started having symptoms as early as Feb. 7, continued with her daily tasks until she was found to be infected Tuesday.

Over the 11 intervening days, authorities say she came into close contact with at least 166 people -- 49 of them health workers -- all of whom are now quarantined at home. Among her contacts, 14 from the church she attends tested positive for the virus Wednesday, as well as another from a hospital where she received care.

She told authorities she did not suspect she could have the illness, as she had no overseas travel history or contact with confirmed patients.

“This is likely going to be a recurring pattern of transmission from now on,” infectious disease specialist Dr. Lee Jae-gap told The Korea Herald, saying community-based transmission was already well underway.

Ki Moran, the head of Korean Society for Preventive Medicine’s committee for virus response, told The Korea Herald that the tricky thing about the illness was that some patients only exhibit mild symptoms, making it difficult to identify the time of onset or even to diagnose.

“We already knew there were asymptomatic patients,” she said. “What remains a question is whether a patient having no symptoms could in fact be infectious, in which case a more widespread transmission is expected.”

If the epidemic keeps growing, not all patients could get isolated care in negative pressure rooms due to dearth of facilities, she said. “Those with minor symptoms will have to be treated at their respective homes, like they are doing in China.”

Korean Medical Association’s Vice President Bang Sang-hyok told The Korea Herald that it was possible that more virus patients could be out there without knowing they are infected.

“Because the early signs are similar to those of the flu or a cold, doctors shoulder the responsibility of deciding whether a patient should be tested or not,” he said, which is why patients are advised to consult the Korea Centers for Disease Control Centers at 1339 before visiting a clinic.

“As we have witnessed in recent cases, a visit from a confirmed patient leads to suspension of a hospital’s operations and quarantine of medical workers, in turn leading to placing other patients in need of care at risk,” he said.

Bang said until we gain a better understanding, playing it safe was best advised in guarding off the new disease.

“For instance, the incubation period, which was initially thought to be 14 days, may be as long as 24 days,” he said, calling for tighter preventive measures from health officials.

Former KCDC director Jun Byung-yool told The Korea Herald that the past month was just the beginning of an outbreak that is forecast to persist.

“The health care system will go out of order if infections begin to rise among medics,” he said. “Government should make sure there is no shortage of protective equipment and testing kits at medical institutions.”

He also said community spread here could have been stalled, had authorities taken the right steps at the right time.

“It took only 28 days for a first case of local transmission to emerge in the country,” he said. “Which is about 40 days faster than it did during the 2009 flu outbreak.”

And unlike 11 years ago, we are without a vaccine or treatment this time, he added.

“The best defense against any outbreak is minimizing public’s contact with infectious individuals,” he said, referring to the debated ban on arrivals of visitors from China. “The failure to implement the travel ban in time is attributable for premature spread of the virus here -- which we could have avoided.”