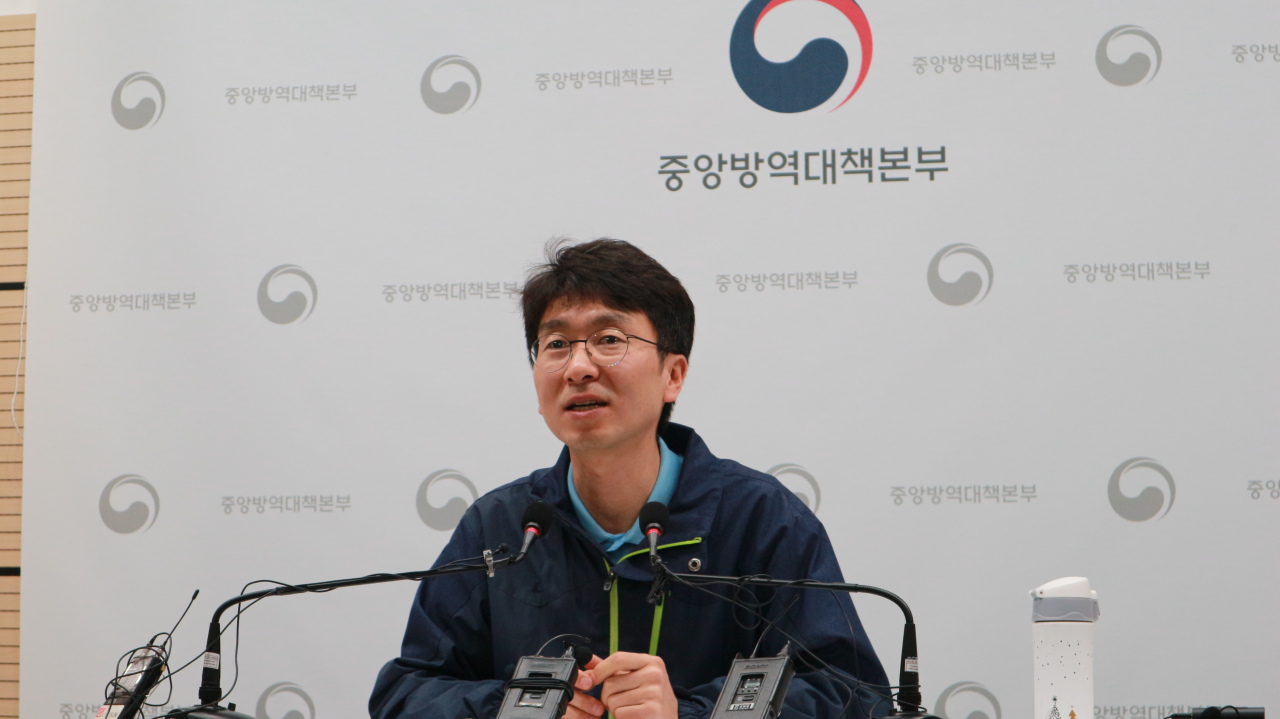 Park Young-jun, head of the epidemiology and case management team, speaks during a press briefing Wednesday at the KCDC headquarters in Osong, North Chungcheong Province. (KCDC)
The new coronavirus that originated in China has infected 28 people in South Korea, with at least 5,000 being monitored for symptoms.

Every time a new case is discovered, epidemiological investigators at the Korea Centers for Disease Control and Prevention rush to track the course of the infection and estimate its sphere of influence.

Park Young-jun, the chief of the KCDC emergency response center’s epidemiology and case management team, spoke to reporters Wednesday about what it takes to follow the path of the fast-spreading new coronavirus, now named COVID-19.

Park’s experience with infectious disease surveillance dates back to the outbreak of Middle East respiratory syndrome in 2015, the country’s most recent health crisis before COVID-19. Prior to entering public service, he practiced as a doctor of preventive medicine.

An epidemiological survey entails establishing a link between risk factors and the disease, collecting information on the source and mode of transmission and determining who are susceptible, according to Park.

He said the immediacy of response following a confirmed case is of a pressing importance.

“Because the disease is highly infectious, we get down to work right away,” he said.

“To minimize the spread of contagious diseases, we have to quickly identify how a patient was infected and to whom the patient may have transmitted the disease,” he said. “And then we proceed to trace the patient’s contacts, and place them under active monitoring for as long as the duration of the incubation period. Assess contacts who report symptoms, find out their contacts, repeat.”

All these steps are preceded by an interview with the patient.

“In the interview with patients, we start tracing their itinerary, contacts, onset of symptoms and so on,” he said. The information is cross-checked through credit card statements, closed-circuit TVs and mobile device trackers.

Although the personal information review is authorized under laws on infectious disease control, Park said this is where privacy concerns arise. Some patients are also averse to the fact that their past locations will be published.

“We explain and help patients understand that we are doing this survey for public safety and protection,” he said.

KCDC defines a virus contact as a person who has been within 2 meters of a patient for 15 minutes or longer after the onset of symptoms. Face-to-face contact with the patient or exposure to their bodily fluids is considered close contact, even if it was for less than the standard 15 minutes.

Before symptoms begin, a patient is not considered infectious, as it is uncertain whether asymptomatic transmission can occur at this point, he said. Based on transmission patterns so far, passersby are not tagged as contacts.

“Other factors such as whether the location of contact was well-ventilated and open, and if the patient was wearing a face mask at the time of contact, also come into play in evaluating the transmission risk,” Park said.

Following the tracing activities, field investigations are launched at sites the patient has visited. District office and health centers conduct the field work with and under the direction of the emergency response center.

There exist obvious challenges of operating with incomplete knowledge and understanding of the outbreak and its rapidly changing dynamics.

For instance, Park said authorities were faced with having to decide how far the high-risk area extends.

“When the novel coronavirus first emerged, its area of infection was limited to a certain seafood market in Wuhan, China. Then it widened to the entire city, and then to the surrounding province of Hubei, to regions around the world far removed.”

He said a growing number of recent travelers from Southeast Asian countries have reported respiratory symptoms or fever. Four out of 28 confirmed cases in South Korea involve a history of travel to Japan, Thailand and Singapore.

“But the question of quarantining symptomatic visitors from countries other than China remains a debate,” he said. “We want to concentrate attention and resources where there is a higher incidence of disease.”

Park said there were about 70 health officials and physicians nationwide who had been trained to carry out epidemiological investigations.

“Once community spread begins to take route, the kind of extensive investigations that are taking place now will not be realistically feasible,” he said.