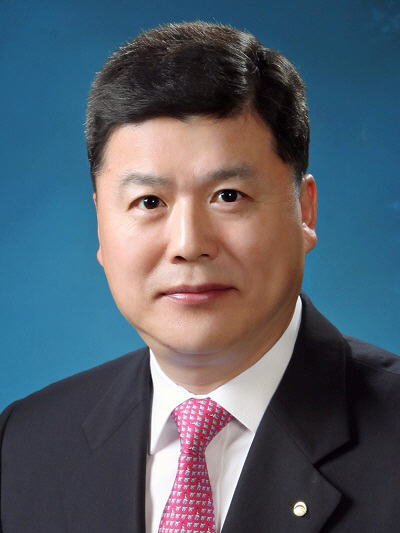 Kwon Kwang-seok, new Woori Bank CEO and head of the Korea Federation of Community Credit Cooperative’s credit business (Woori Bank)
Woori Financial Group on Tuesday announced the appointment of the new head of its flagship commercial banking unit, in a move that is projected to further escalate its tension with the financial authorities here.

Sohn, who has been reappointed as the financial group’s chairman by the committee formed of external board members in December, will leave his role as chief executive to focus on governing Woori Financial Group.

Kwon, 57, is set to officially start his term after the financial group’s shareholders meeting scheduled for March 24.

Sohn’s second term as the group’s chairman is also planned to be confirmed at the meeting. He became Woori Bank’s chief executive in 2017 and took the helm of the entire group in November 2018.

All three made presentations and participated in interviews with the external board members on Jan. 31.

Kwon joined the Commercial Bank of Korea in 1988, which later became Woori Bank after it merged with Hanil Bank in 1999. He was also CEO of Woori Private Equity Asset Management in 2018 before taking on his current role at the KFCC.

Kwon’s nomination is expected to contribute to stabilization of Woori Financial’s governance, but the new chief is likely to be burdened with the tasks of resolving issues tied to the derivatives-linked fund and lime asset management fiasco, amid the bank’s souring relations with the financial authorities.

The Financial Supervisory Service and Woori Financial has locked horns over the latter’s apparent refusal to heed the watchdog’s decision to slap sanctions on Sohn last month. He was one of the two banking group chiefs held responsible for the misselling of DLF products last year. The products -- designed to track the performance of constant maturity swap rates of the US dollar and UK pound or German bond yield -- led to massive losses for mostly retail investors.

Woori Bank was also a key sales channel for Lime Asset’s troubled funds, which has frozen an estimated 1.7 trillion won ($1.42 billion) in assets.

Industry watchers say that Woori Financial’s decision to nominate Kwon, while sticking to Sohn’s reappointment is likely to irk the financial authorities. The financial giant had initially planned to appoint the new CEO of Woori Bank around the Lunar New Year holidays, but the plan was delayed multiple times in what was seen as an attempt to adjust the timeline around the FSS' sanctions announcement.