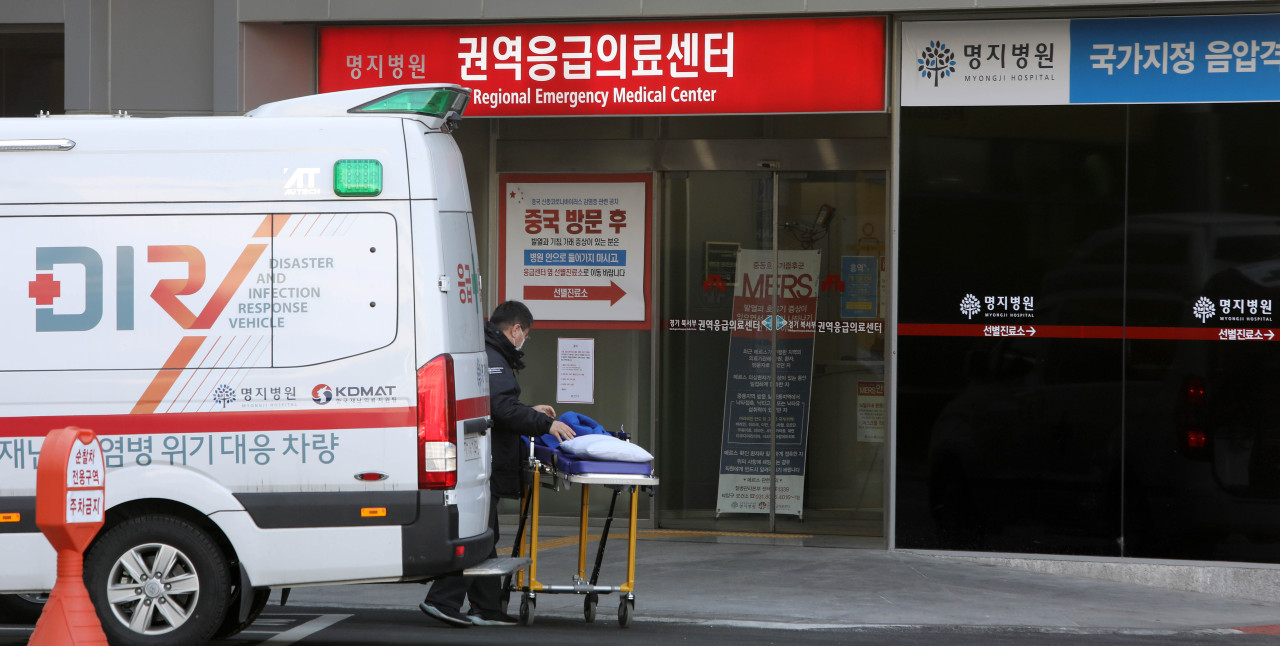 An ambulence is parked outside the hospital where the 28th patient is in isolation in Goyang, Gyeonggi Province on Tuesday. Yonhap
South Korea’s latest confirmed case of the coronavirus has raised alarm over the virus’s incubation period and the country’s quarantine measures.

The latest case, the 28th patient, is a 30-year old Chinese national who was confirmed Tuesday. Authorities believe she is likely to have contracted the virus from the third patient.

The third patient is a 54-year old Korean male who arrived in Korea from Wuhan on Jan. 20, and was confirmed and isolated Jan. 26. With the last contact between the two patients having occurred Jan. 25, the incubation period of the virus in the 28th patient would be 18 days or longer.

The government’s response team has been operating under the assumption that the incubation period of the virus is 14 days. Potentially infected individuals are subjected to a quarantine of 14 days.

The 701 Koreans brought back from Wuhan on Jan. 30 and 31 will begin to be released into the general population from Saturday, and those due to arrive Wednesday will also be subjected to a 14-day quarantine. Latest research from China, however, suggests that infected individuals could remain asymptomatic for as many as 24 days.

However, Jung Eun-kyeong, head of the Korea Centers for Disease Control and Prevention, ruled out extending the quarantine period based on the Chinese research, saying there was insufficient evidence.

“The most common (length) of incubation period among patients in Korea is three to four days, and eight days at most,” Jung said, adding the situation needs to be monitored further.

Seoul has not ruled out the possibility of the 28th patient’s confirmation being delayed due to the patient suffering mild symptoms or failing to notice early symptoms.

The 28th patient is reported to be currently showing almost no symptoms, and the level of the novel coronavirus detected in her system is near the borderline between positive and negative results.

As for the third government-chartered flight out of Wuhan, the flight was set to take off from Incheon Airport later in the day and to return with some 170 Koreans and Chinese nationals who are immediate family members -- legally recognized partners, parents and offspring -- of Koreans.

The flight will be accompanied by medical professionals, quarantine officers and Ministry of Foreign Affairs officials.

After arriving in Korea on Wednesday, they will be screened, and those without symptoms will be quarantined for 14 days at the Joint Forces Military University’s Defense Language Institute in Icheon, Gyeonggi Province.

For the time being, Seoul has no plans to arrange a fourth flight to bring back Koreans and relatives from Wuhan.

The government has requested that Koreans refrain from traveling to Japan, Malaysia, Singapore, Taiwan, Thailand and Vietnam but it stopped short of issuing a formal travel alert on the six counties. The government’s suggestion of refraining from traveling to a certain area is equivalent to a yellow alert, which is currently imposed on China.

Hubei province, including Wuhan, are currently under red alert, which suggests Koreans leave the area without urgent cause.

The six countries have confirmed cases of coronavirus, and four of Korea’s 28 confirmed cases have been linked to three of these nations -- Japan, Singapore and Thailand.