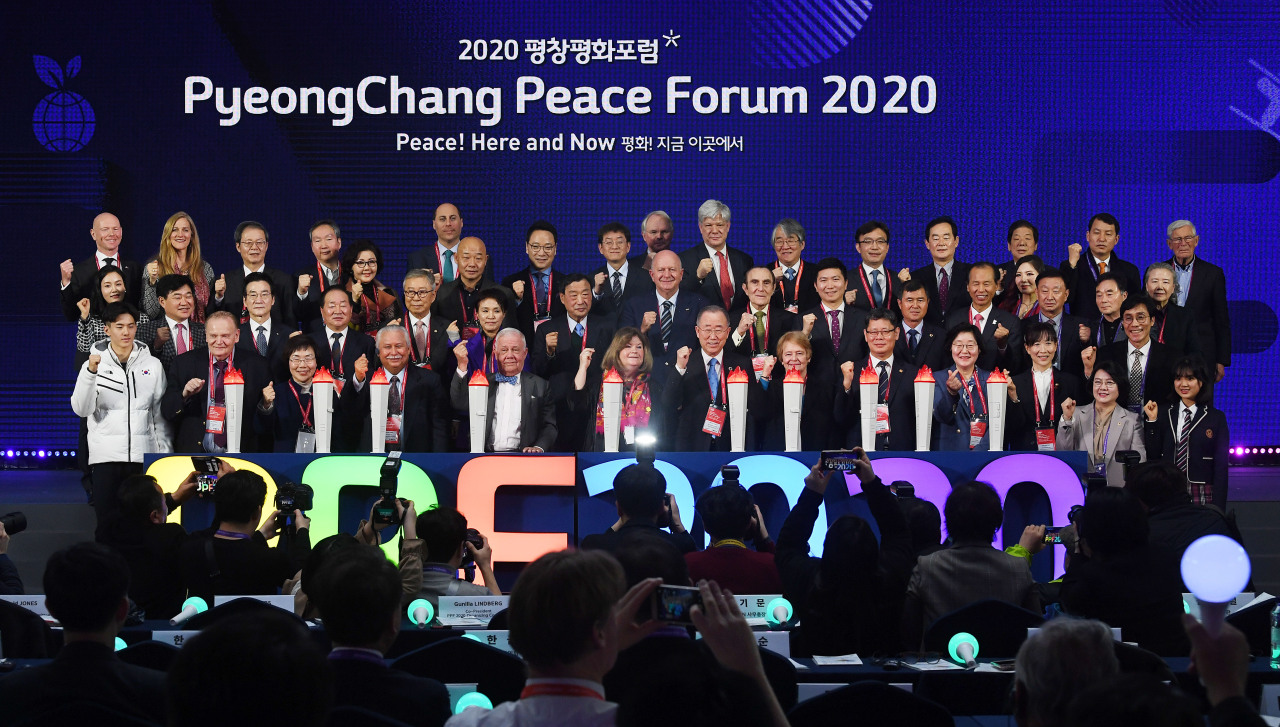 Speakers and guests of the PyeongChang Peace Forum 2020 pose for photos Sunday in PyeongChang, Gangwon Province. (Yonhap)
During the 2018 PyeongChang Olympics, South and North Korean athletes entered the opening ceremony together and formed a joint women’s hockey team, creating momentum that led to bilateral talks between the South and North.

Maintaining that legacy and peace building, the PyeongChang Peace Forum 2020 “Peace! Here and Now” takes place through Tuesday at Pyeongchang Alencia in Gangwon Province with 1000 participants from 25 countries.

The three-day conference is being attended by global leaders, scholars and experts, featuring the theme “Action Plan: End the Korean War” and topics related to sports, economy, ecology and the UN Sustainable Development Goals.

At the opening ceremony on Sunday, former UN Secretary-General Ban Ki-moon delivered a keynote speech. Emphasizing that the world is facing shared challenges such as a climate crisis, Ban urged countries to work together to tackle global issues by adopting the UN’s Sustainable Development Goals.

Choi Moon-soon, governor of Gangwon Province, said, “Despite difficulties including the stagnant dialogue between North Korea and the US and continuing sanctions against North Korea, the historic efforts for peace on the Korean Peninsula, which started with the 2018 Pyeongchang Winter Olympics, must continue ceaselessly.

“In this regard, efforts for the PPF 2020 shall be made to prepare detailed implementation measures to continue to establish the peace process on the Korean Peninsula and draw support from the international community.”

In addition to the forum, in its second edition, PyeongChang and Gangwon Province hope to continue to use sports events as peace-building tools. Such efforts paid off in January, when the International Olympic Committee chose PyeongChang to host the Winter Youth Olympics in 2024.

South and North Korea are seeking to co-host the Olympics in 2032.