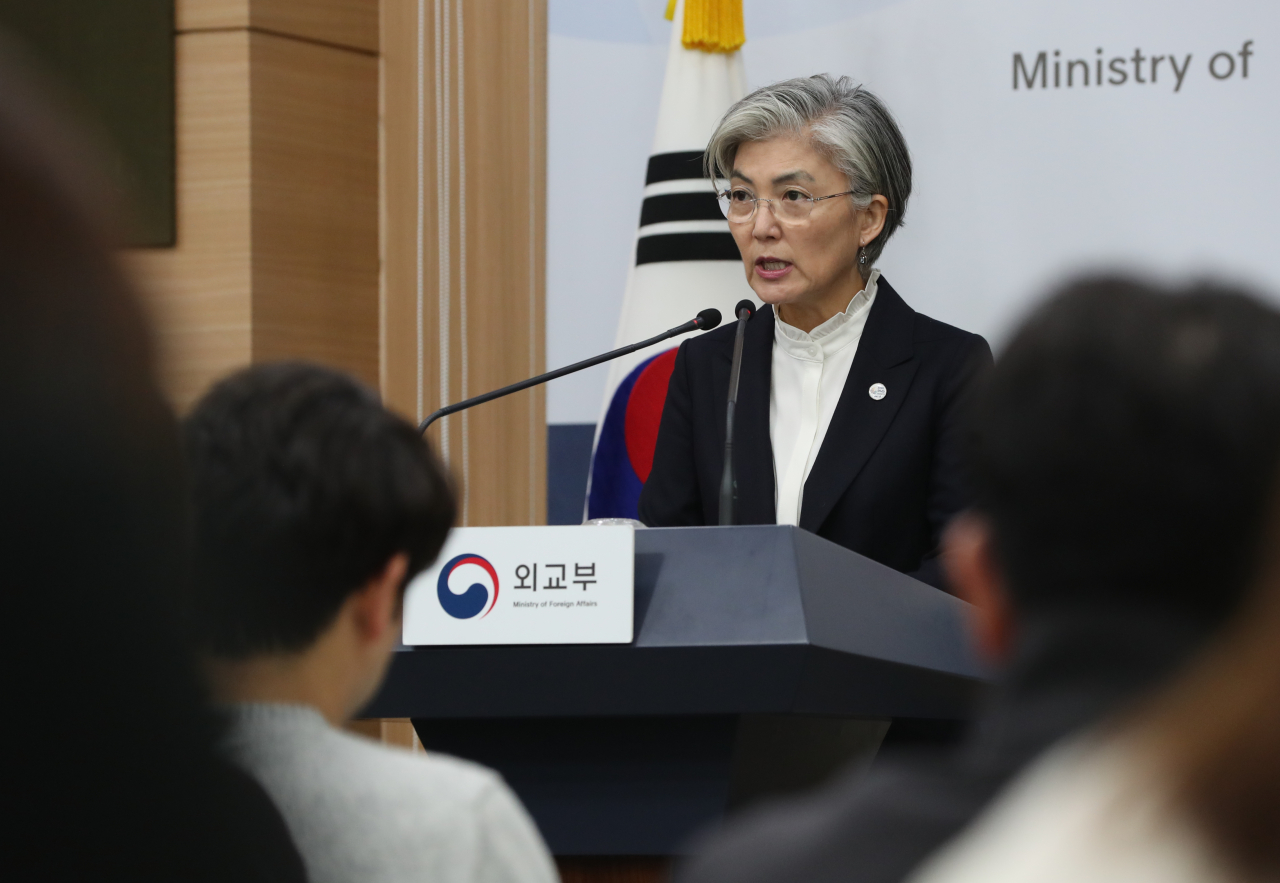 “Regarding Xi’s visit to Korea, the agreement that it will be in the first half is still valid,” she told reporters during a press conference for local media outlets. “We will communicate closely with China so that major diplomatic events take place as planned.”

Xi’s visit, if realized, is widely expected to bring about a thaw in Seoul-Beijing relations, which have been chilly since Korea’s decision to host a US-made advanced missile system in 2017.

But as the novel coronavirus -- believed to have originated from the Chinese city of Wuhan -- is spreading across the world, experts have raised the possibility of a delay.

Another concern is Seoul’s decision this week to bar entry of foreigners from Hubei province, the epicenter of the coronavirus outbreak. With growing calls to bar entry from all of China, Seoul is mulling whether to take more drastic steps, while taking into consideration Xi’s visit and potential diplomatic backlash from Beijing.

On widening the ban to all of China, the minister emphasized the government will make a decision after evaluating the situation.

“The government is continuously examining the situation, based on a comprehensive review of the spread of the virus in China, global trends and quarantine efforts. And if necessary, the government will consider taking additional measures,” she said.

“Korean citizens’ safety comes first, but we also have to consider the WHO’s advice, the effect of (an entry ban) and international society’s movement.”

Kang was referring to the WHO’s stance that restricting travel or trade from China is unnecessary.

On the ongoing round of defense cost-sharing talks with the US, Kang said there were still “big gaps” between Seoul and Washington, but the understanding of each side has deepened.

Following the sixth round of discussions on Jan. 16, Seoul and Washington have not confirmed the schedule for the next round.

“While there isn’t a face-to-face consultation, we are communicating via email and phone,” she said. “Both sides are aware that we are pressed for time.”

Upping the ante in the negotiations for the upkeep of some 28,500 American troops here, the US military recently said nearly 9,000 South Koreans working for US Forces Korea could be put on unpaid leave on April 1, if the two sides fail to strike a deal by then.

“It’s hard to predict the outcome or when a deal will be reached, but we will keep negotiating, taking into (consideration) the employees’ rights and interest,” she said.

Regarding concerns that Korea-Japan relations could deteriorate further if assets of Japanese firms are liquidated for compensation for Korean victims of wartime force labor, Kang said the government could not intervene as it was a matter of the “judicial process.”

“If the assets’ liquidation occurs, the government’s negotiation strategy and response cannot help but change,” she said. “As for the exact timing (of the liquidation), it’s hard for the government to predict.”

In October 2018, Korea’s Supreme Court ruled that Japanese firms should make compensation for its use of Korean workers during World War II, drawing a strong rebuke from Tokyo, which claims related issues were settled under a 1965 agreement.

Following the order, Seoul’s court is moving to liquidate the seized assets of Japanese firms, possibly in the first half of this year, risking further Japanese backlash over the issue.

“The government has to be ready just in case and monitor what kind of action Japan will take in response,” she said.

Kang also stressed that Seoul “still has the right” to revive its currently halted decision to end a bilateral key intelligence-sharing pact with Japan, known as the General Security of Military Information Agreement, as the trade restrictions on Korea have not been completely resolved.

“There have been talks between trade officials (between the two countries), but it hasn’t returned to the situation before July 1,” she said referring to the day when Japan tightened export controls of key chemicals for semiconductors to Korea last year.