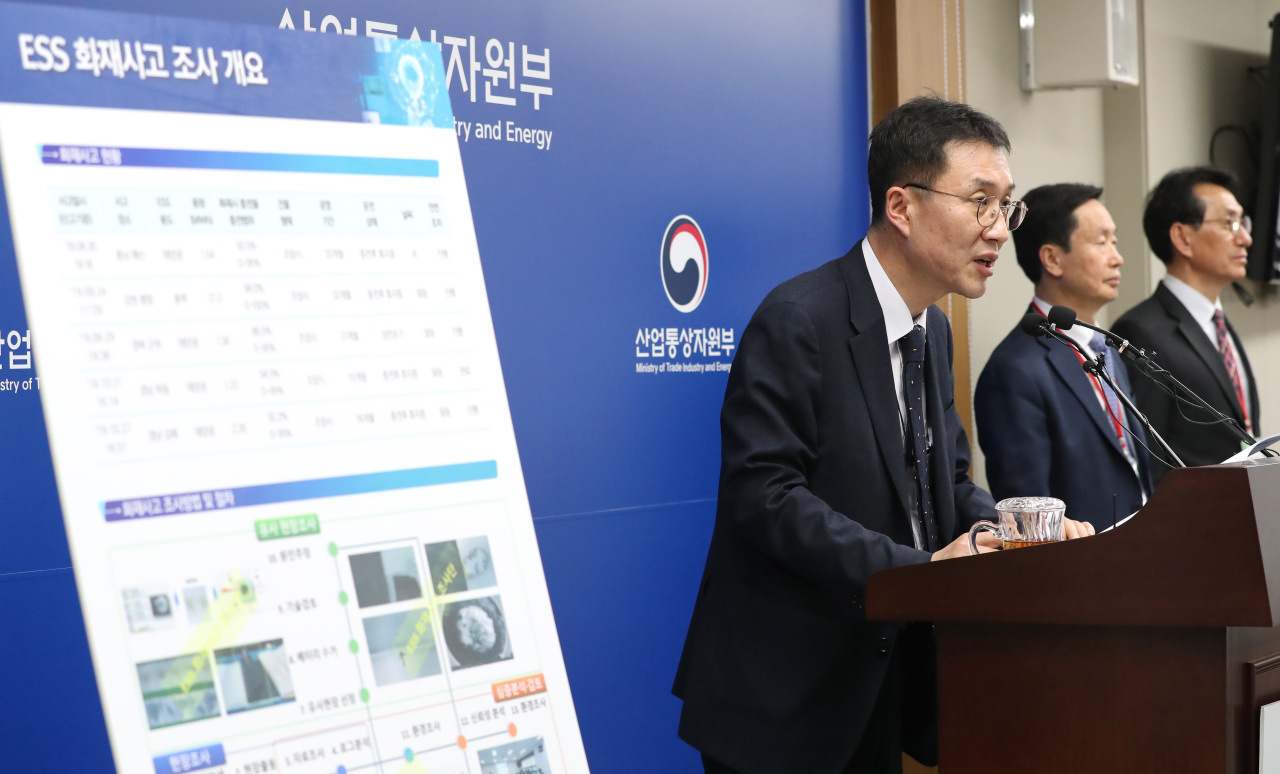 Officials announce the result of investigation into five ESS fire accidents at the Ministry of Trade, Industry and Energy on Thursday. (Yonhap)
A joint panel of electric engineering experts at public and private institutions under the Ministry of Trade, Industry and Energy concluded on Thursday that four out of five energy storage systems of Korean battery makers caught fire last year due to defects in the battery cells.

The panel concluded that except for one in Hadong, South Gyeongsang Province, battery defects caused the fires at four other ESS sites.

At the ESS sites in Yesan, South Chungcheong Province, and Gunwi, North Gyeongsang Province, set up by LG Chem, the ministry’s panel said it found the ignition points were in the batteries according to operation records of the systems. It also found some traces of meltdown in the batteries of the burnt systems collected from the sites.

To further look into the batteries, the panel broke down the batteries of the systems that were installed by the company near the Yesan site at the same time, and found that some foreign fragments adhered to the cathode plates and lithium deposits in the separators.

By examining similar batteries in Gunwi, the panel said it found some anode active materials.

For the ESS sites in Pyeongchang, Gangwon Province, and Gimhae, South Gyeongsang Province, installed by Samsung SDI, the investigative group cited erroneous charging and discharging processes as the cause of the fires. At the Pyeongchang site, the product’s energy management system revealed that the power voltage rose above the maximum level set for charging and fell below the minimum level for discharging. The battery protection didn’t work, leading to the fire, the panel said.

At the Gimhae site, the panel found the voltage deviation in the Samsung system showed an increasing trend for the past six months.

Both LG and Samsung strongly objected to the findings, unanimously contending that the batteries were not the direct cause of the ESS fires.

The company also claimed the substances like anode fragments, lithium debris, anode active materials and the meltdown traces are normally found in ESS products, and not only in the aftermath of fires.

Samsung argued the voltage deviation is not a factor that makes the ESS prone to fire. 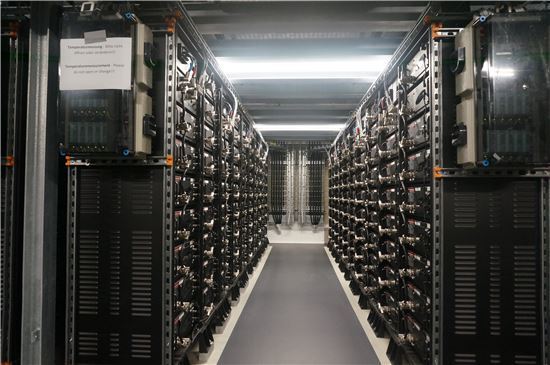 Samsung SDI ESS platform in Germany (Samsung SDI)
“The maximum voltage for charging is set at 4.15V but it can go up to 4.25V, due to 100mV additionally spared for safety,” the company said. “The panel’s argument that the charging voltage of 4.18 spotted in the past operation records can’t directly be related to the fire.”

The minimum discharging voltage set by Samsung for the ESS products is 1.5V, which is lower than 2.5V pointed by the panel.

Last year, there were a total of 28 accidents that involved the two firms’ ESS products among some 1,490 ESS facilities across the nation. The Industry Ministry investigated 23 of them and announced the results in June. Both LG and Samsung vowed to enhance safety measures for their ESS customers by announcing 200 billion won ($169 million) to 300 billion won worth plans.