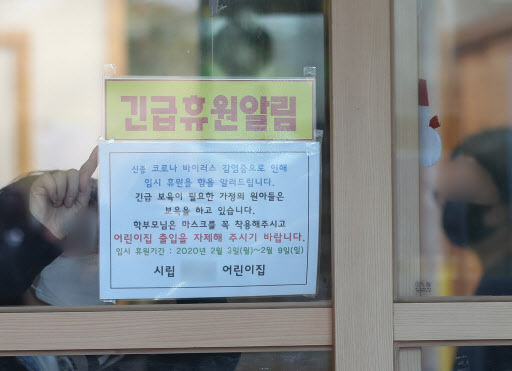 (Yonhap)
According to the Ministry of Education, 245 kindergartens, 53 elementary schools, 21 middle schools, 16 high schools and one special-education school postponed reopening following the month-long winter vacation or halted operations to rein in the spread of the coronavirus.

Most of the schools affected by the virus are in Suwon, Bucheon or Goyang in Gyeonggi Province, Gunsan in North Jeolla Province and in Seoul, where those infected with the virus have come from or visited.

Schools in areas considered to be vulnerable to the spread of the virus are now allowed to make a decision at their discretion on whether to temporarily close doors through prior consultations with regional educational authorities.

Education authorities in Suwon and Bucheon ordered all kindergartens and some elementary and middle and high schools in the cities to close for a week.

Authorities in Goyang recommended closure for all its kindergartens in the city for one week. However, only nine out of 157 kindergartens were closed, which led the ministry to revise the total number of kindergartens from 393 to 245 in the afternoon.

In Gunsan, all kindergartens, elementary, middle and high schools were ordered to close for two weeks.

Amid growing fears over the further spread of the virus upon Chinese students’ return to Korea for a new semester, the ministry said it plans to review whether to delay the reopening of universities this week.

There were an estimated 71,067 Chinese students studying at universities in Korea as of 2019, accounting for 44.4 percent of all foreign students here.

A total of 112 students and school officials are currently in self-imposed isolation after visiting the province, according to a survey of 242 universities by the ministry.

Meanwhile, 21 Korean students and school officials who visited China’s Hubei province, the epicenter of the new coronavirus, less than two weeks ago remain in self-imposed isolation, as they are not showing any symptoms of the virus, according to the ministry.

Korea has confirmed 15 cases of the coronavirus that is believed to have originated in the central Chinese city of Wuhan, with 913 people having come into contact with those infected with the virus, according to health authorities.

Starting from Tuesday, South Korea will temporarily ban foreigners who have visited Hubei province within 14 days from entering the country, and everyone who came in contact with those infected with the virus will be required to quarantine themselves for two weeks.

The coronavirus outbreak has killed at least 362 people and infected more than 17,300 globally. There are now at least 179 confirmed cases of the virus in more than 27 countries and territories outside mainland China.

One person outside mainland China, a 44-year-old Chinese man in the Philippines, has died. Sweden and Spain reported those countries’ first cases over the weekend.