“Australia’s got abundant gas and renewable energy. … I see hydrogen as the next phase of Australia’s very important energy partnership with the Republic of Korea,” the envoy said in an interview with The Korea Herald last month at the Australian Embassy in central Seoul.

He noted Korea’s plan to usher in the “hydrogen economy” by 2040, which envisions the use of hydrogen for power generation, vehicles and other aspects of daily lives, shifting away from fossil fuels and nuclear energy.

In tandem with Seoul’s ambition and Australia’s efforts to bolster its hydrogen exports, energy cooperation between the two countries is set to be taken to another level, Choi said.

“Australia is already a significant supplier of all aspects of Korea’s energy supply from coal, gas. I can clearly say that in 10 years, if we meet the ambitions that have been put forward by the Korean government, hydrogen will become another important aspect of Australia-Korea energy partnership,” the Korean-born Australian diplomat said.

Australia is in the process of devising technology and methods to produce hydrogen for domestic and international supply, leveraging its expertise with liquefied natural gas.

“There are very few countries that have proximate but (are) also liable, stable politically that will be able to match Australia’s capabilities,” he said.

Australia is lucky as it has both blue and green hydrogen, the envoy went on.

“We are not backing one technology over another because there’s something called blue hydrogen. … The other aspect is green hydrogen, which is our ultimate goal. This creates hydrogen from renewables, and there is no carbon emission whatsoever in its production.”

Korea and Australia forged diplomatic ties in 1961 and have since worked together in a slew of areas to build a stable relationship, which formed the foundation for their free trade agreement ratified in December 2014 and defense cooperation.

In December, the two countries held the fourth “2+2” meeting in Sydney, involving defense and foreign affairs ministers of both sides. 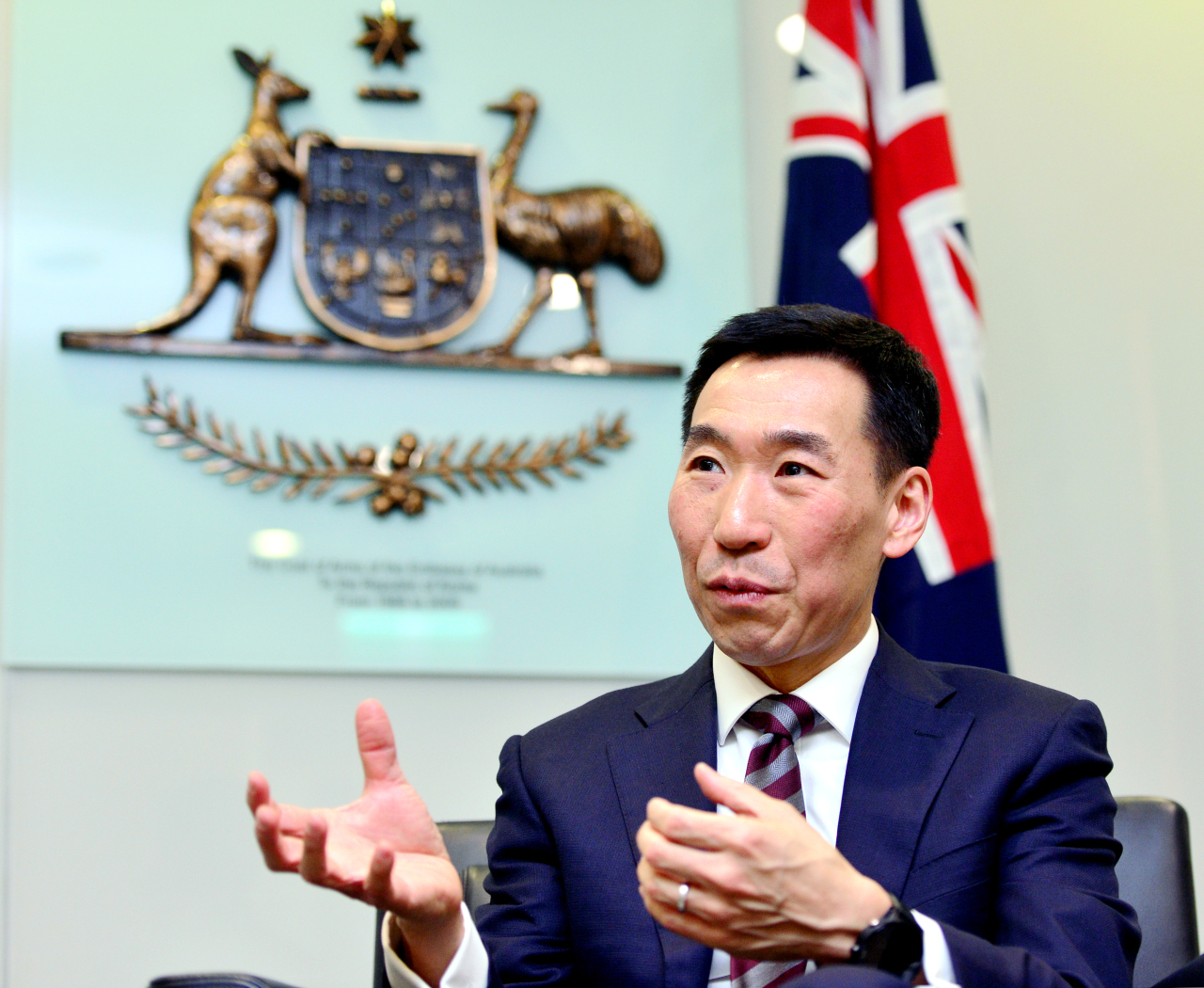 Australia’s Ambassador to Korea James Choi gestures in an interview with The Korea Herald at the embassy in central Seoul on Jan. 20. (Park Hyun-koo/ The Korea Herald)
Defense Minister Jeong Kyung-doo and his Australian counterpart Linda Reynolds shared their thoughts on collaboration for peacekeeping and improved defense technology.

In explaining the importance of defense cooperation, Choi said, “We, as middle size powers, can have the space to be free and prosperous without being told what to do by major powers. I think that’s a very important principle that both our countries share.”

Australia sent some 17,000 soldiers as part of the United Nations Command Forces during the 1950-53 Korean War.

Choi was born in South Korea and moved to Australian with his family at age 3. He assumed the ambassadorial position here in 2017 after stints in Denmark and the United Nations, among others.

The diplomat -- who says he inadvertently stumbled upon a career as a career diplomat -- has been spotted at a wide variety of events across Korea, mingling with the public and forming a bridge between the two countries.

“The nature of diplomacy has changed. … Diplomacy is about reaching to a broader audience … we have to communicate, especially with the people, to send the message about what the Australian government is about, what Australian people value, and what the opportunities for cooperation are,” Choi said.

Choi’s diplomatic efforts encompass not only events for diplomats but also opening a soccer game, running marathons, cycling across Korea, and giving lectures at universities, to name a few.

Asked what motivates him, Choi said it is “to figure out what the next stage of Korea is going to be … as part of that I’m trying to build linkages between Korea and Australia.

“It’s very rewarding to know that, being here, I’m contributing to something that will grow into the future.”

Korea and Australia will celebrate the 60th anniversary of their diplomatic relations next year. Going into the anniversary, Choi highlighted the two countries are “like-minded partners.”

“I think that the Australia-ROK relationship is in a very good position right now. But I don’t think it has tapped into its true potential,” Choi said.