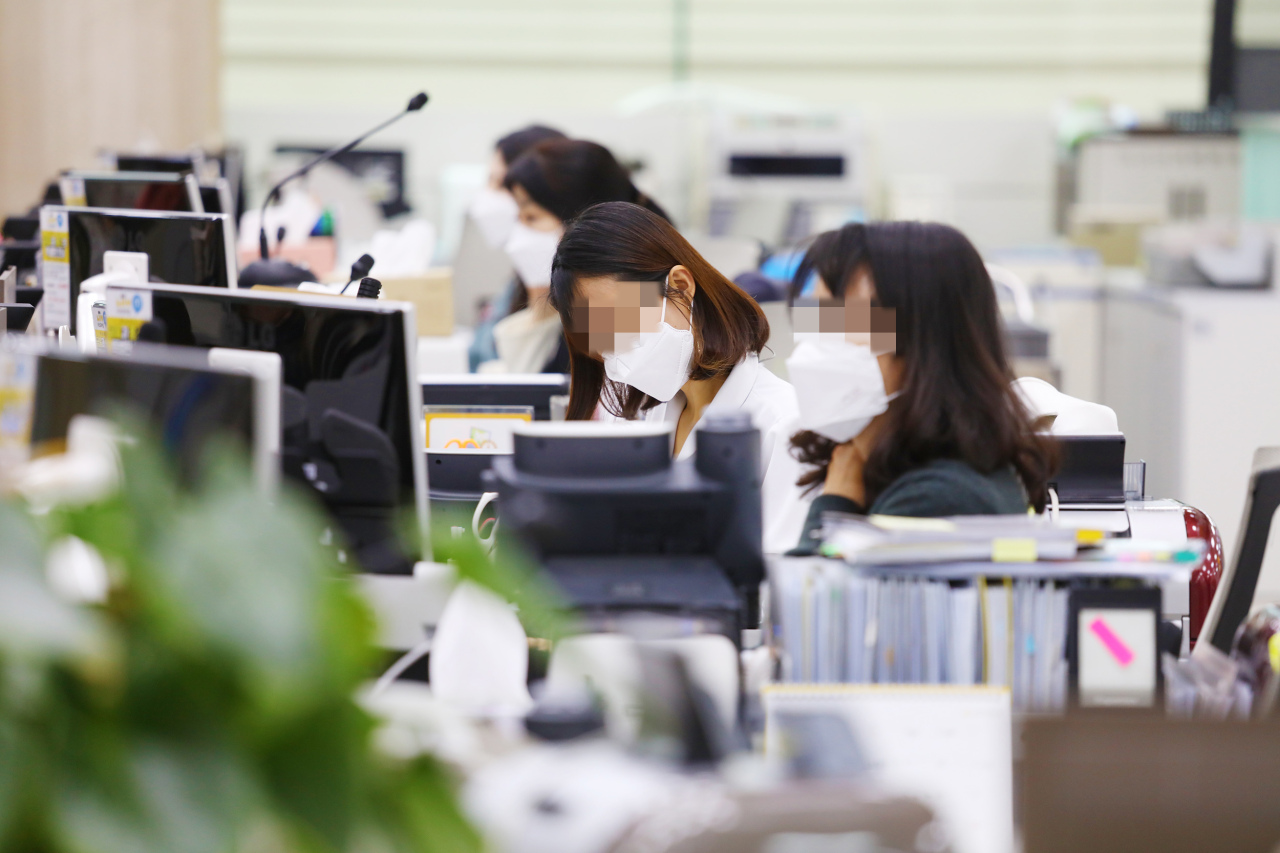 Employees at a KB Kookmin Bank branch in western Seoul wear facial masks to prevent the spread of coronavirus, in this photo taken Tuesday. (Yonhap)
Silence prevails at KEB Hana Bank’s main branch in Myeong-dong, central Seoul, on Wednesday in Seoul, except for a bell ringing that a bank clerk -- wearing a mask -- is ready to serve the next customer.

At the entrance, customers wonder if they are entering a hospital by mistake, as they are greeted with noncontact infrared thermometers and hand sanitizers placed at every corner, along with signs that read “preventative measures top priority.”

The branch is one of many brick-and-mortar units of major banks operating under guidelines drafted for the case of an outbreak. Bank branches each receive hundreds of visitors daily, making them potential breeding grounds for deadly epidemics.

The big four lenders -- KEB Hana, KB Kookmin, Woori and Shinhan -- have all adopted basic hygiene procedures including the distribution of face masks for employees and hand sanitizers as of Wednesday. Emergency meetings or task forces have been launched to curb the spread of the virus, according to officials.

Not only taking preventative measures for its domestic operations, the big four have also sent aids and warnings to Chinese subsidiaries.

The big four have subsidiaries or branches only in major cities in China, such as Beijing or Shanghai, except the state-run Industrial Bank of Korea that has a branch in Wuhan, Hubei province -- the epicenter of the viral outbreak.

IBK’s Wuhan branch is likely to shut down until at least Sunday, as set by Chinese authorities for the extended Lunar New Year holiday, to contain the infection. It has been closed since Friday.

There are two Korean employees at the Wuhan branch and one of them has decided to return via a chartered flight scheduled for Thursday and Friday and arranged by the Korean government, an IBK spokesperson said. The other, the head of IBK’s Wuhan branch, has decided to stay until further notice.

KEB Hana has decided to send packages containing face masks and sanitizers to its Chinese subsidiary in Beijing to distribute to all branches there. “The packages will be sent to our Chinese subsidiary by the end of the day,” said a KEB Hana spokesperson.

The lender held an emergency meeting presided over by CEO Ji Sung-kyoo on Tuesday and upgraded the firm’s crisis level to “orange,” the second-highest in terms of severity.

KEB Hana’s industry rival KB Kookmin plans to distribute face masks to not only their employees, but to customers as well.

The lender ordered its Chinese subsidiary to launch an emergency inspection meeting and activate its emergency contact network among branches there and the headquarters in Korea. It also requested employees refrain from visiting Wuhan or nearby areas.

KB Kookmin currently has a subsidiary and five branches in major cities across China, including Beijing, Shanghai and Guangzhou.

Shinhan has also sent notices to its employees across the country, informing them of the nature of the coronavirus and countermeasures. Airports and local branches with large tourist foot traffic have received special warnings to be especially cautious.

Woori is currently seeking out employees who have visited China within the timeframe of the coronavirus outbreak, corresponding with this year’s Lunar New Year. It plans to recommend potential patients isolate themselves until further notice.

The number of coronavirus patients in Korea remained at four as of early Wednesday.