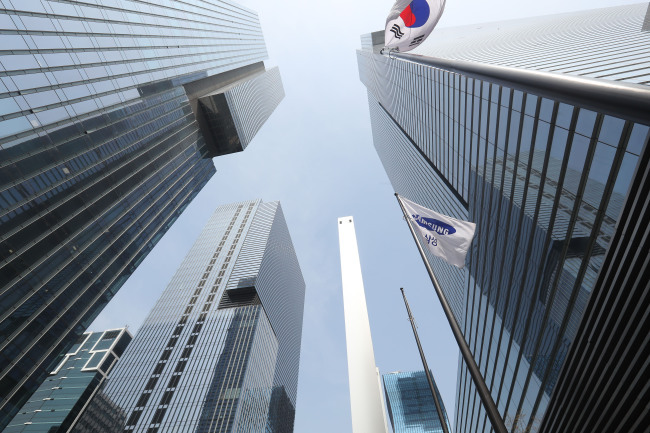 An exterior view of Samsung headquarters building in Seoul. (Yonhap)
A cap on Samsung Electronics’s weight in a Korean equity index could kick in earlier than planned, triggering fears that billions of dollars will exit the stock.

Instead of the bi-annual adjustment, the Korea Exchange is considering putting a 30 percent limit on Samsung’s weighting on the Kospi 200 Index earlier due to the stock’s recent rally, said Ahn Kil-Hyun, the manager of the team that oversees the index. Given the gauge’s popularity among passive funds, research provider Smartkarma’s Douglas Kim expects between $1.2 billion and $1.5 billion in net selling of Samsung shares as a result.

The bourse adopted the 30 percent cap in June 2019 to prevent a potential plunge in the entire market due to a single stock, rebalancing every June and December. Smartkarma says there’s an 80-90 percent chance the rule will kick in for Samsung in March or April.

“It is true that the Kospi 200 Index is being distorted because of Samsung,” Ahn said. “We just want to minimize shocks to the market.”

Ahn added that details have yet to be confirmed, including the frequency of rebalancing. The Kospi 200 index is a market-cap weighted gauge provided by the Korea Exchange. About $30 billion passive funds track the index, according to Gilbert Choi, analyst at NH Investment & Securities. After soaring 44 percent in 2019, Samsung currently accounts for 33.2 percent in Kospi 200 Index, up from about 28 percent in September last year.

A Samsung Electronics spokesman declined to comment on the exchange’s discussions.

The potential forced selling in Samsung shares shows decisions by index providers have grown increasingly important for stock markets in recent years, thanks to the rising popularity of passive investment strategies.

Samsung’s outsized influence on the Korean gauge compares with just a 4.8 percent weighting of the US’s largest company, Apple, on the S&P 500 Index.

“I’m not sure if such a cap can prevent a distortion in the stock market, as the cap itself could be a factor for distortion,” said Hyun Choi, head of equities at Barings Korea. “It may result in investors increasing exposure to other large caps in their portfolio, which can lead to price distortion."

SK hynix, a peer of Samsung and the second-biggest member on Kospi 200, has a 6.4 percent weight on the measure, followed by Naver’s 2.65 percent and Hyundai Motor’s 2.09 percent.

Other global indices including DAX and Euro Stoxx 50 have market-cap restrictions for a single stock, with both having a limit of 10 percent for any one stock and they are adjusted on a quarterly basis, according to a note from Smartkarma. (Bloomberg)