The ardent Roman Catholic asked God many times why she and her family were facing this personal crisis and what she had done wrong in her life. She begged God to change her son’s sexuality so that he could lead a normal life.

In the end, it was she who changed. 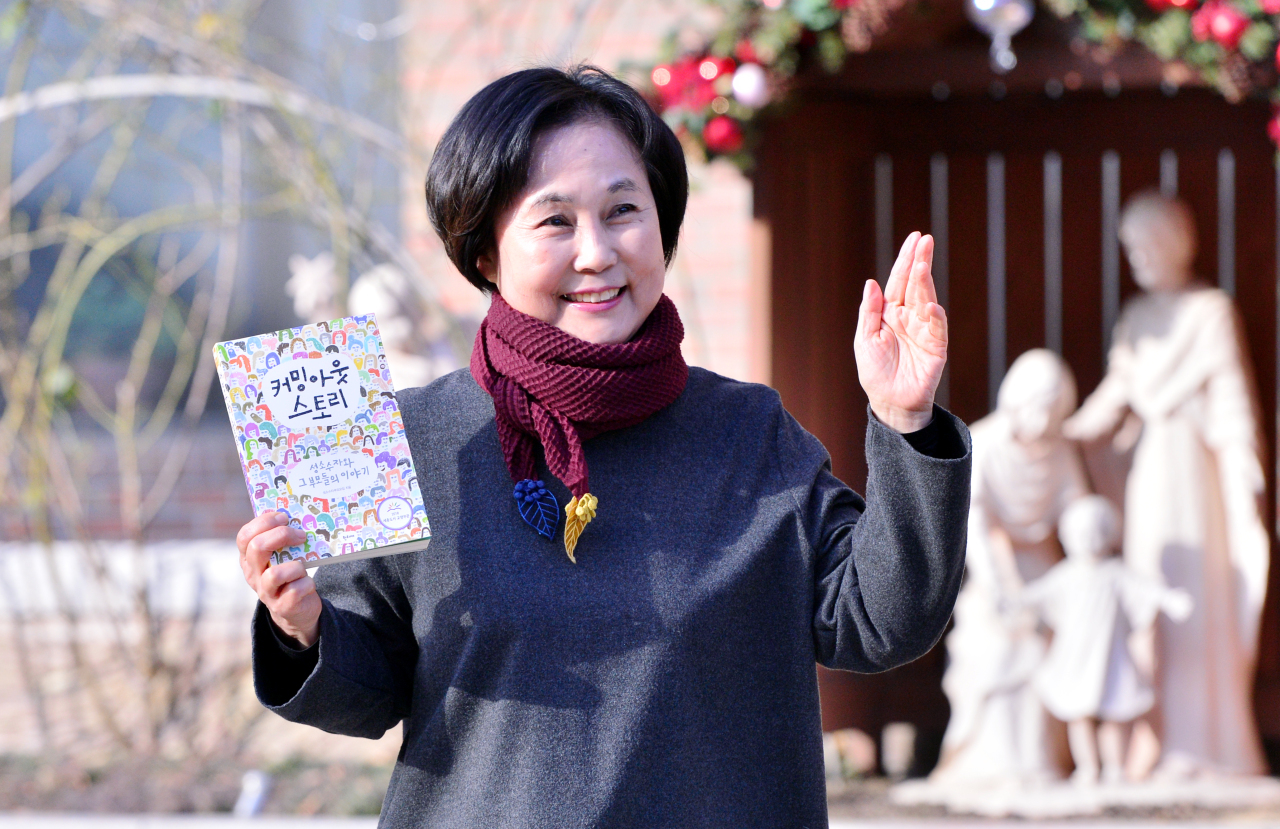 Hong Jung-seun poses for a photo on Jan. 16 in front of a Catholic church in southwestern Seoul while holding a book, titled “Coming Out Story,” which she co-authored with other parents of LGBT people. (Park Hyun-koo/The Korea Herald)
“I had been so devoted to serving God, but why my son? I thought it was a punishment for something I did wrong. I hated God,” Hong said during an interview with The Korea Herald.

For a while, she could not eat. She spent many sleepless nights in shock, denial and guilt. Her mood changed every second.

Her thoughts were fixed on what her son’s sexuality would mean for his life -- and for her life -- in a society where sexual minorities are often denied, discriminated against and hated.

After spending much time alone praying, she came to the realization that God was teaching her the virtues of love and acceptance, not punishing her.

“My life goal was to send my son to a good university, get him to have a good job and form a good family. But I learned to see and accept him as he is, not as I want him to be,” she said. “God taught me I cannot change a living thing but I can embrace it as it is.

“Without him coming out, I would have lived and died without breaking my prejudices, unable to wholeheartedly sympathize with the socially marginalized,” she said. “My views have been broadened and my world has been enriched. I learned the meaning of gratitude.”

Now, Hong leads a group of parents of sexual minorities who meet for three hours once a month. It’s her way of supporting other parents going through the same agony.

According to the latest Organization for Economic Cooperation and Development report published in 2019, Korea was fourth from the bottom in terms of LGBTQ inclusiveness among member countries surveyed. It scored 2.8 points out of 10, with the OECD average being 5.1.

A 2014 poll by the National Human Rights Commission of Korea found that 54 percent of LGBTQ teens experienced bullying and discrimination at school, and 19.4 percent had attempted suicide.

Most parents who attend Hong’s group meetings have teenage children who have just come out. Those children, Hong said, are walking on the fence between life and death -- and asking for help.

“There was a time when my son was very sensitive and I thought it was just due to stress from studying ahead of the college entrance exam,” she said. “I am sorry that he had to put up with fear and loneliness on his own.”

For her son, Hong hopes for a world where sexual minorities can thrive and find happiness as they are.

“Most urgently, we need an anti-discrimination law. Parents of sexual minorities are worried about their children’s safety every day,” she said. “I just want my gay son to be able to live here safely just like others. I am not asking for any privileges.”

Religion should be a bridge, not a barrier, she added, referring to Protestant groups that have been outspoken in their opposition to gay rights and expression.

Yet, Hong sees signs of positive change, albeit slow.

The country’s pride parade is also getting bigger every year, with the 2019 parade in central Seoul attracting a record 80,000 LGBTQ people and their supporters.

Her son is not a source of worry anymore, she said. He is a source of happiness and reason for gratitude, as well as a bridge to a world that is richer and more colorful. For that, she thanks him every day for having appeared in her life and being who he is.

“Thank you, my son, for opening up a bigger world for me,” she said.