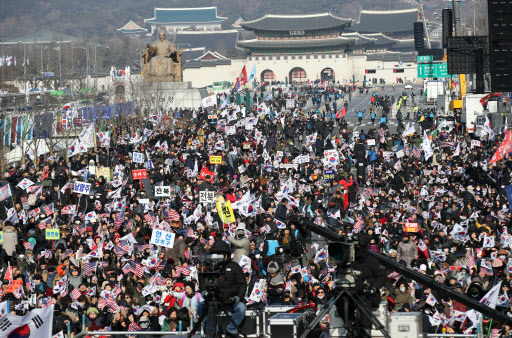 1. [Feature] Weekend rallies in central Seoul a headache for residents

[1] Protesters chanting anti-government slogans and marching with loudspeakers in traffic lanes closed off for them have become a common sight on Saturdays in central Seoul in recent years.

[2] In a country where street demonstrations paved the way for democracy, this may be seen as a sign of great strides in freedom of expression.

[3] But complaints are growing in rally-prone areas in central Seoul, namely Gwanghwamun Square and the vicinity of the presidential office.

[4] “We came here to have lunch, but we are now moving somewhere else because it is just too loud,” said Kim Yi-yeon, a 34-year-old office worker, Saturday at Gwanghwamun Square.

[5] “I feel like we had Gwanghwamun stolen every weekend,” Kim said, walking away from the square with a friend.

2. EXO's Chen to get married

[1] EXO’s Chen announced Monday afternoon that he will be getting married, hinting that his wife-to-be is also pregnant with his child.

[2] In a handwritten letter sent through his agency SM Entertainment, the singer said he has a “girlfriend who he would like to spend the rest of his life with.”

[3] He also said a “blessing has arrived” to him, hinting that his soon-to-be-wife is pregnant.

[4] “I don’t know where to begin and I’m so nervous and shaky. But I decided to pen the letter even if my writing isn’t perfect because I wanted to let my fans know first with all honesty who have given me so much love,” he wrote.

[5] The singer also said his girlfriend is not a celebrity and added that the two plan to have a small private wedding attended only by the couple’s family.