[ The Korea Herald – Send E-mail ]
Trump pulls back from war with Iran
By AFP
Published : Jan 9, 2020 - 09:05
Updated : Jan 9, 2020 - 09:14
WASHINGTON (AFP) -- President Donald Trump pulled back from the brink of war with Iran on Wednesday, saying that Tehran appeared to be "standing down" after firing missiles -- without causing casualties -- at US troops based in Iraq.

In a televised address to the nation from the White House, Trump emphasized there were "no Americans harmed" in the ballistic missile salvo aimed at two bases.

While he promised to immediately impose "punishing" new economic sanctions on Tehran, Trump welcomed signs the Islamic republic "appears to be standing down" in the tit-for-tat confrontation.

The comments cooled what threatened to become an uncontrolled boiling over of tensions after Trump ordered the killing last Friday of a top Iranian general, Qasem Soleimani.

However, the US president, facing both an impeachment trial in Congress and a tough reelection in November, defended his targeting of a man seen by many as Iran's second most influential official. 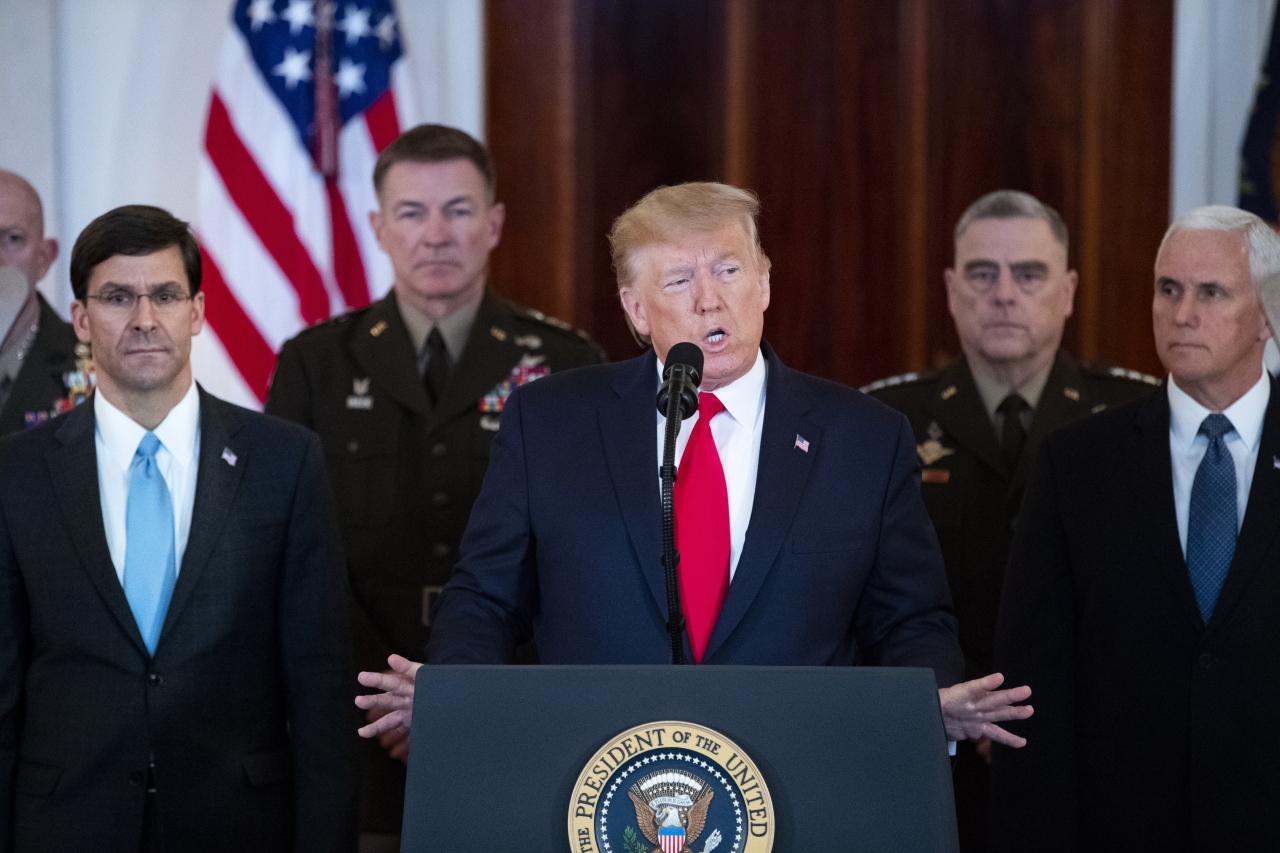 US President Donald Trump (EPA-Yonhap)
Soleimani, a national hero at home, was "the world's top terrorist" and "should have been terminated long ago," Trump said.

And although Trump ended his remarks with a call for peace, he opened by stating that he would never allow Iran to procure a nuclear weapon.

He then urged European allies and other world powers to follow America's lead in abandoning an international agreement on managing the country's nuclear ambitions.

It was Trump's 2018 withdrawal from that agreement and the reimposition of crippling economic sanctions against Iran which began an intensification of tensions between the two countries.

Iran's missiles targeted the sprawling Ain al-Asad airbase in western Iraq and a base in Arbil, both housing American and other foreign troops from a US-led coalition fighting the remnants of the Islamic State jihadist group.

Iran's supreme leader Ayatollah Ali Khamenei, who earlier promised "revenge" for Soleimani, called the missiles a "slap in the face" against the United States.

He indicated there was more to come.

"The question of revenge is another issue," Khamenei said in a televised speech.

Iraq's military said it also sustained no casualties. But the strike highlighted the difficult position of Iraq, caught in an ever-deepening conflict between Trump and Iran.

Iran has powerful militia allies in Iraq and they said they intended to take revenge for Friday's US drone attack, in which top Iraqi paramilitary commander Abu Mahdi al-Muhandis died alongside Soleimani.

Muhandis was the deputy head of Iraq's Hashed al-Shaabi, a military network incorporated into the Iraqi state whose factions are backed by Tehran.

The brazenness of Iran's ballistic missile strike was unusual.

But as the dust settled, it appeared that Iran's attack -- coming soon after the burial of Soleimani at a funeral in front of vast crowds -- might have been more symbolic than anything.

Iraq analyst Ramzy Mardini told AFP "it's clear that Iran's intent wasn't to inflict pain or cause justification for the US to retaliate in a major way. It was meant to send a signal."

That signal could either have been a face-saving measure aimed at public opinion or a way of showing Washington that Tehran would not be cowed by Trump's bellicose warnings, Mardini said.

Reflecting deep concerns among Trump's domestic opponents, the Democratic-led US House of Representatives scheduled a vote for Thursday on limiting the Republican president's ability to wage war against Iran without congressional approval.

US headaches in Iraq

The apparent de-escalation in Iran did not remove pressure from approximately 5,200 US troops stationed across Iraq, where they face pro-Iranian Shiite militias and political opposition.

Paramilitary chief Qais al-Khazali -- blacklisted as a "terrorist" by the US -- said his side's response to the United States "will be no less than the size of the Iranian response."

Angered at the US drone strike, the Iraqi parliament has called for expulsion of American troops, sparking embarrassing confusion at the Pentagon over how to respond.

"Trump's reckless approach has created a dangerous reality in which the best case scenario is avoiding war with Iran," the group said.

Separately, a Ukraine International Airlines Boeing 737 crashed just outside Tehran after taking off bound for Kiev, killing all 176 people on board shortly after Iran launched its missiles towards Iraq.

There was no immediate suggestion of any link with the strikes but carriers including Air France, Royal Dutch Airlines and Lufthansa announced they were suspending flying though Iranian and Iraqi airspace as a precaution.

The US aviation regulator banned civil flights over Iraq, Iran and the Gulf, citing the potential for "misidentification" of aircraft. (AFP)