The 12 countries include the US (the world’s largest economy), China (the second-largest) and India (the seventh-largest). The four trade blocs are the 28-member European Union, the 10-member Association of Southeast Asian Nations, the four-member European Free Trade Association and a five-member Central American bloc.

Last year Korea also signed FTAs with the UK and Israel, which have yet to be ratified in the legislatures of the respective countries.

Asia’s fourth-largest economy is also in FTA talks with Indonesia, Ecuador, Malaysia, Russia and the Philippines. Reaching further, Korea is a participant in the 16-country talks toward an Asia-Pacific FTA called the Regional Comprehensive Economic Partnership, as well as talks with a trade bloc known as Mercosur consisting of four countries in South America.

In addition, negotiations for a trilateral free trade pact for Korea, China and Japan are underway. 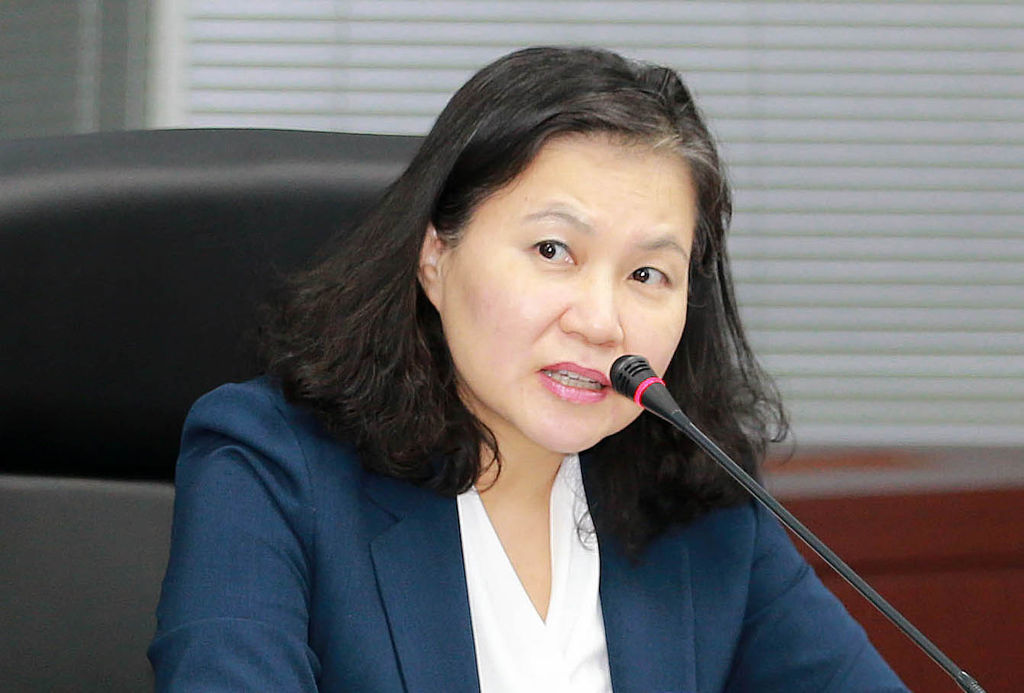 South Korea’s Trade Minister Yoo Myung-hee (Yonhap)
The Korea-China-Japan FTA talks are drawing especially close attention. Comparisons have been drawn to the North American trade bloc -- comprising the US, Mexico and Canada -- in terms of the access it would offer to continental and global economies.

It has been nearly seven years since the three Asian countries started FTA negotiations in March 2013.

Though the tripartite meetings have made slow progress amid contentious issues involving history and territory, the 15th and 16th rounds of negotiations took place in 2019 -- in Tokyo in April and Seoul in November.

Korean government officials say it is still too soon to reach a deal due to the presence of vulnerable sectors within all three markets. An official with the Ministry of Trade, Industry and Energy was quoted by a news outlet as saying Japan’s agricultural sector is vulnerable to imports from China, whereas China’s manufacturing sector fears competition from Japan, and both sectors within Korea are vulnerable to competition from China and Japan.

But the officials did not dismiss the optimism that has resurfaced about the prospects of the three sides narrowing their differences.

A research analyst at a brokerage firm in Seoul predicted that the free trade deal would also serve as a diplomatic alliance and increase national security, in addition to having economic benefits.

Local officials are pinning their hopes on progress this year. In late December there were steps toward reconciliation between Korea and Japan, after a full-fledged trade war during the second half of 2019.

Meanwhile, Korea’s negotiations with the Mercosur bloc -- comprising Brazil, Paraguay, Argentina and Uruguay -- are also drawing wide attention. The two sides, which agreed to start negotiations in May 2018, have held three rounds of talks, most recently in July 2019. 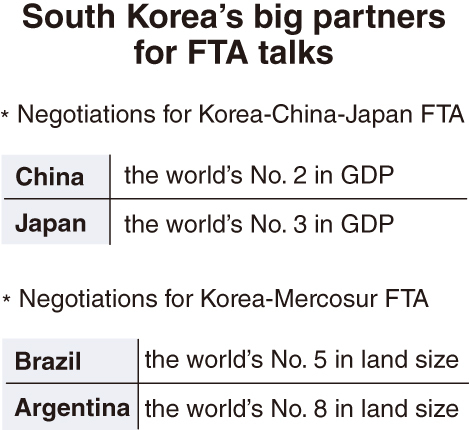 (Graphic by Kim Sun-young/The Korea Herald)
Brazil has the world’s fifth-largest landmass and Argentina stands at No. 8. Combined, their territory is more expansive than that of Canada, which stands at No. 2. The two are the world’s ninth-largest and 25th-largest economies in terms of GDP, while Uruguay (76th) and Paraguay (89th) are also drawing close attention as emerging trade partners.

The collective population of the four Mercosur countries came to 267 million as of 2019. Brazil is the world’s sixth-most-populous country with 212 million whereas Argentina is No. 32 with 45.1 million.

In a similar vein, Korea was the first Asian country to sign an FTA with a Central American trade bloc composed of Honduras, Nicaragua, El Salvador, Costa Rica and Panama.

The Korea-Central America FTA took effect Oct. 1, 2019, with Honduras and Nicaragua. The deal will be in full effect when the other partners ratify it in their legislatures.

Trade Ministry officials are pinning significant hopes on the deal with Central America, Korea’s 16th FTA, viewing it as a potential catalyst to the vitalization of talks with neighboring South American countries.