With the year winding to a close, local production companies and theaters have been announcing the musicals set for the stage next year, with lineups including licensed international hits and locally brewed shows alike.

Last month, Seensee Company launched a local production of “Aida,” which will continue through Feb. 23 at Blue Square in Yongsan, central Seoul. What is slated to be the last season of the show has been on a successful run, selling 95 percent of all tickets as of Wednesday.

Even after the curtain closes in Seoul, the show will go on at the Dream Theater in Busan from March 20 to Sept. 19. 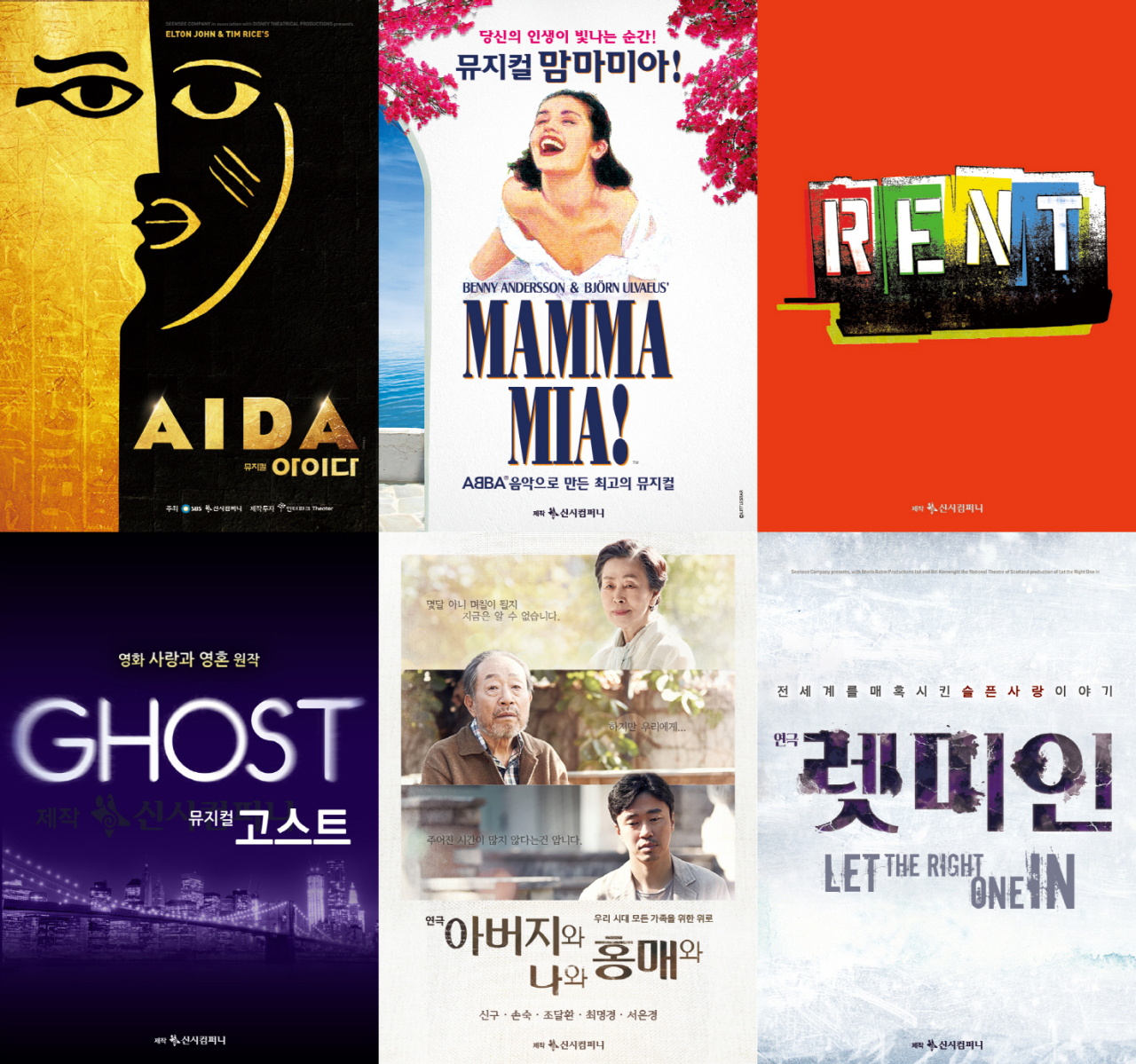 Posters for some of the musicals slated for 2020 (Seensee Company)

Another time-tested hit, “Mamma Mia!” will be making a return to the Seoul stage after the 18-month tour around the country last year. It runs at D-Cube Arts Center from March 8 to May 31.

“Rent” and “Ghost,” both popular with Korean fans, will be staged at D-Cube after years of absence. “Ghost,” a love story that transcends the boundary between life and death, will be staged from Oct. 16 to March 2021.

Production company Show Note also announced its lineup for next year, with many recently created in the offing.

Rock musical “Lizzie” will open at the Dream Arts Center in Seoul’s theater district of Daehangno in April.

Musical “Jamie,” a local adaptation of “Everybody’s Talking About Jamie” that premiered in the UK in 2017, will kick off in July at LG Arts Center in Seoul. According to the promoters, the show will be a replica of the original, with composer Dan Gillespie Sells and director Jonathan Butterell visiting Korea to reproduce the exact structure of the original.

“The Great Comet” is a localized version of Broadway’s “Natasha, Pierre & the Great Comet of 1812,” which is a musical adaptation of a segment from Leo Tolstoy’s “War and Peace.” The show was noted for its immersive production -- referring to action happening around and among the audience -- and will be performed at the Universal Arts Center from September.

Musical comedy “A Gentleman’s Guide to Love and Murder” will kick off in November of next year, after its 2018 performance managed a successful run with an accumulated 63,000 audience members and 92 percent of tickets sold.

The lives of great artists appears to be the main theme for the shows presented by the HJ Culture.

Kicking off the year for the production company is “Vincent Van Gogh,” based on letters exchanged between the tortured artist and his brother, which will continue through March 1 at Yes 24 Stage in Daehangno.

The theater will then host “Rachmaninov,” about genius musician Sergei Rachmaninoff, later in the month.

“Paganini,” a musical about Italian violinist Niccolo Paganini, will take place at Sejong Center for Performing Arts in June.

King Sejong is one of the most beloved monarchs in Korean history, who was also a scientist, scholar and philosopher known for inventing the Korean writing system Hangeul. His story will be told in a musical around October -- in which lies the Hangeul Day holiday -- although a venue has yet to be announced.

Visits by international or US-produced shows have always proved popular, as demonstrated by the ongoing success of “The Phantom of the Opera” at the Busan Dream Theater.

“War Horse” by the National Theatre in Britain is holding an international tour that will make a stop at the Busan theater in June.

“‘Cats,’ the first musical to surpass an accumulated 2 million tickets in Korea, will also go on stage at the Dream Theater in July.

The Dream Theater has been hosting large-scale musicals since its opening earlier this year as a musical-exclusive theater, including “Lion King” and “School of Rock.” While it has been customary for visiting tours to perform in Seoul first, more shows are opting to kick off in Busan, including the aforementioned “The Phantom of the Opera.”