North Korea slammed the United States on Thursday for convening a UN Security Council meeting, saying the "provocative act" has helped it decide which path to take in the deadlocked nuclear talks.

A spokesperson of the North's foreign ministry made the remarks after the UNSC held a session on Wednesday at the request of the US At the meeting, the US envoy called on the council to "act accordingly" against Pyongyang's tension-heightening behavior. 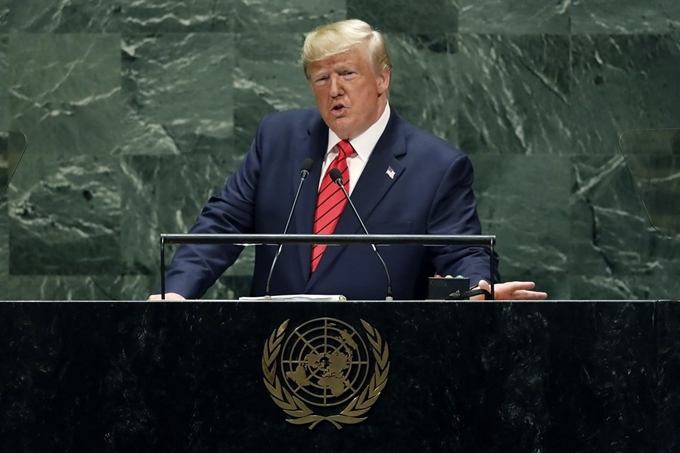 US President Donald Trump (Yonhap)
"We will never tolerate the US for fostering the mood of pressure against North Korea by spearheading the UNSC public meeting that discussed our problem at such a sensitive time as right now," the North Korean official said.

"The US took a stupid act like hitting at its own foot with an ax by holding the meeting," the official added. "It has also given us decisive help in making up our mind clearly on which way we will take."

The council meeting was held amid speculation that the North might conduct a major provocation ahead of a year-end deadline set by the North for the US to make concessions.

Denuclearization talks have stalled since the summit between North Korean leader Kim Jong-un and US President Donald Trump broke down in February after they failed to match Pyongyang's denuclearization steps with Washington's sanctions relief and other concessions.

North Korea has urged the US to come up with a new proposal before the end of this year, warning that it could otherwise take a "new way."

On Saturday, North Korea conducted what it called an "very important test" at its west coast satellite launching site better known as the Dongchang-ri site, spawning speculation that it could be preparing to fire an intercontinental ballistic missile.

During Wednesday's session, US Ambassador to the UN Kelly Craft said that Washington is ready to be flexible in talks but urged Pyongyang to refrain from further provocations. (Yonhap)