Biegun’s visit is likely to begin Sunday, and he hopes to meet North Korean officials at the inter-Korean truce village of Panmunjom, according to Japan’s Kyodo news agency and local media. 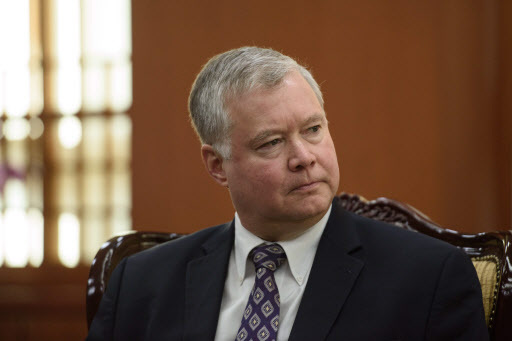 Stephen Biegun, US special representative for North Korea.(AFP-Yonhap)
The Foreign Ministry was not able to confirm Biegun’s plans to meet with North Korean officials. The US Embassy in Seoul did not respond to a request for comment.

As Pyongyang’s self-imposed year-end deadline looms near, Biegun’s trip is gaining attention as an opportunity to deliver a message to the North.

Last year, Biegun played a crucial role in breaking the stalemate in the US’ nuclear talks with North Korea. He visited Panmunjom alone last December and offered to provide humanitarian assistance and ease restrictions on travel by US citizens to the North, helping to bring the regime back to the negotiating table.

But expectations for another dramatic turnaround in US-N. Korea relations have been lowered.

Experts here said that if Biegun brings a personal letter from US President Donald Trump this time, it should contain ways to offer concessions, such as sanctions relief and security guarantees, to bring dialogue back on track.
“But what Biegun can offer will be limited and will not be attractive enough to get North Korea to delay its year-end deadline,” said Hong Min, a research fellow at the Korea Institute for National Unification.

He said Trump and Secretary of State Mike Pompeo have not made any comment showing willingness to discuss the North’s demands. They have only repeated their stance that the regime’s denuclearization should come first.

“There’s nearly zero chance that Biegun will be taking a soft line that could go against what his superiors said,” Hong said.

Biegun’s trip appears to be aimed at holding a meeting with South Korean officials in preparation for the possibility of military provocations by North Korea, rather than seeking active engagement with the North, he added.

Next week is the only remaining plausible time for a working-level meeting, as the US enters the year-end holiday season and Pyongyang plans to convene a key meeting of the ruling Workers’ Party later this month to decide “crucial issues.” The upcoming meeting has raised speculation that the regime will suggest a major policy change regarding its nuclear negotiations with the US.

“Timing is a decisive factor. The US needs to give messages that North Korean leader Kim Jong-un can talk about during his New Year’s address, which can be related to the North’s economy and security,” said Kim Jin-a, a research fellow at the Korea Institute for Defense Analyses.