[ The Korea Herald – Send E-mail ]
[Herald Review] ‘Killed My Wife’ shows why webcomic-based films rarely work
By Yoon Min-sik
Published : Dec 8, 2019 - 12:48
Updated : Dec 8, 2019 - 12:48
After watching the thoroughly boring “Killed My Wife,” I checked out the webcomic on which it is based. Surprisingly, it was pretty good. The story was intriguing, the style was tasteful and the presentation was effective in building suspense.

Why, then, was director Kim Ha-la’s thriller such a flop? While Lee Si-eon does a fairly good job in his first leading role, the film fails to understand that storytelling methods of a webcomic and a movie are very different, ultimately failing to keep the audience invested.

The story begins with Jeong-ho (Lee) waking up with a horrible hangover, only to be informed that his wife Mi-yeong (Wang Ji-hye) has been murdered. With blood on his shirt, a blood-stained knife in his apartment and barely any memory of the previous night, police pinpoint Jeong-ho as a prime suspect.

He flees, retracing his steps to recall the lost memories in a desperate attempt to clear his name, but the fallout from his gambling habits and massive debt threaten to drag him down. Meanwhile, Lt. Choi (Ahn Nae-sang) comes across something strange in his pursuit to figure out if the husband is truly guilty. 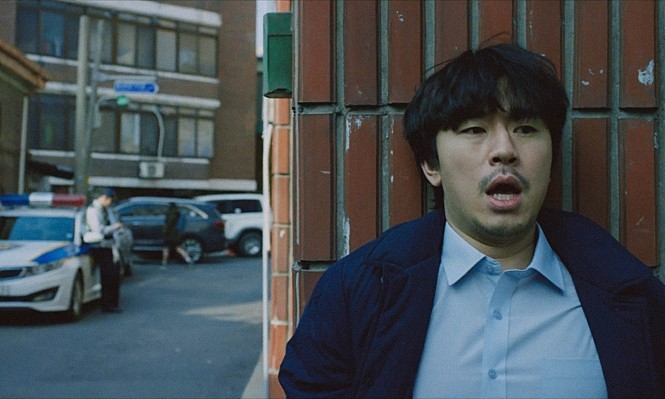 “Killed My Wife” (KTH)
The acting for the most part is passable. None of the performances from the cast are groundbreaking in any way, but these are veteran actors with years of experience under their belt, and there are no major cringe-worthy moments.

But the characters and the plot have been so lazily written that it must be hard for the audience to be hold any interest in them.

This is odd considering the source material with characters and story already written out. The problem is that the script -- written by the director -- lacks the proper adaptation required to turn a fairly short story into a 97-minute movie.

As much as I thought the “Along With the Gods” series was corny and spiked with obvious tear-jerking moments, at least it had depth and a rich backstory. On adapting the popular webcomic series created by a man notorious for being unable to sketch grand action sequences, the filmmakers took the necessary procedure to transform it into a big-budget blockbuster and it worked very well.

Such an effort was apparently nonexistent in “Killed My Wife,” with the director appearing content with just copy-and-pasting the comic panels onto the screen.

The characters lack depth, the “cartoony” reactions and dialogue sound corny, suspense is almost nonexistent and, most importantly, it is boring. A thriller that fails to thrill the audience is by definition a failure.

Despite commanding quite good actors, the film fails to salvage any sort of chemistry between them, as their acting seems misplaced and separated from each other. The payoff at the end is weak, the plot contrived and the epilogue is pointless.

Overall, the film is likely to join a long line of webcomic-based films that went nowhere.

“Killed My Wife” opens in theaters on Wednesday.