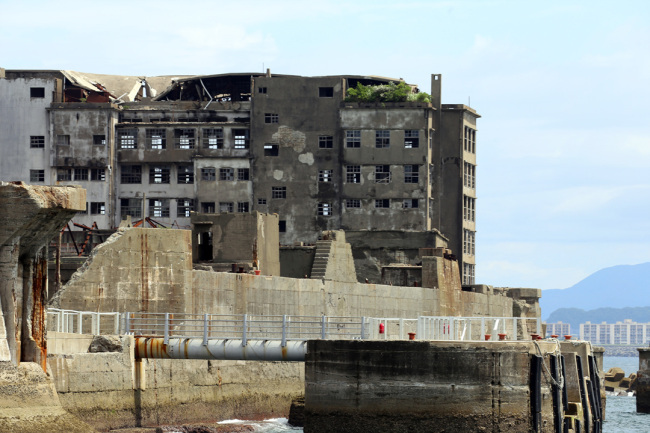 Hashima Island, also known as Gunhamdo in Korean, is located 15 kilometers from the city of Nagasaki, southern Japan. (Yonhap)

On Monday, the UN cultural agency’s World Heritage Center posted on its website Japan’s second report on the implementation of follow-up measures regarding the inscription of the sites of Japan’s Meiji Industrial Revolution.

In the report, Japan failed to state progress on the actions it was taking to acknowledge and commemorate forced labor victims, dismissing UNESCO’s recommendations and its own promises.

Seven of the 23 modern Japanese industrial locations designated by UNESCO as world heritage sites in July 2015 used forced labor from Korea -- then under Japan’s colonial rule -- and other Asian countries before and during World War II.

Some 57,000 Korean workers were sent to the seven sites, including Hashima Island, known as Gunhamdo in Korean, according to government data.

At the time of the designation, the World Heritage Committee recommended that the Japanese government prepare a strategy for the presentation of the property that would convey an understanding of the full history of each site.

In response, a Japanese representative stated that the country’s government was prepared to “take appropriate measures to remember the victims of forced labor.” However, no action has been taken yet.

“The Government of the Republic of Korea urges Japan to faithfully implement the follow-up measures to remember the victims that Japan promised to the international community, and it furthermore urges the Japanese Government to engage in dialogue on this matter,” Foreign Ministry spokesman Kim In-chul said in a statement.

The government will raise the issue with the World Heritage Center and plans to call on Japan to take action on the occasion of various multilateral meetings, such as UNESCO’s executive board meeting, according to a ministry official.

Japan’s first progress report submitted to UNESCO in 2017 also did not include the implementation of the promised follow-up measures. The Japanese government stated that Korean workers “supported” Japan’s industry instead of using the word “forced” to describe those who were drafted against their will.

Despite Japan’s initial pledge in 2015 to establish an information center to honor the victims of forced labor, the 2017 report mentioned a “think tank” instead. The Industrial Heritage Information Centre, which was completed Nov. 30, is located in Tokyo -- not at any of the sites where people were forced to work.

Such contradictory actions have led the World Heritage Center to encourage dialogue between the concerned parties and faithful implementation of Japan’s 2015 pledges.

Seoul has expressed its disappointment over Tokyo’s apparent reluctance to resolve the issue.

“In spite of continued requests from the Korean Government, a major concerned party, for initiating a dialogue, the Japanese Government has shown no willingness to engage in dialogue and instead has chosen to prepare and publish the current progress report without any consultation with the Korean Government,” the Foreign Ministry’s statement said.

Given that recommendations from the international organization are nonbinding, there will be no punitive measures against Japan.

Relations between Korea and Japan have been strained this year over the forced labor issue. In October 2018, Seoul’s top court ordered Japanese companies to compensate Korean forced labor victims, triggering a dispute between the two countries.

Japan imposed trade restrictions on exports of three key industrial materials to Korea and removed the country from its whitelist of trusted trading partners. These moves were seen as retaliation for the court rulings.

In a tit-for-tat response, Seoul decided to end its military intelligence-sharing pact with Japan, though it has delayed the termination for now, with conditions attached.

Korea hopes that Japan will withdraw its export restrictions within months, as authorities have resumed talks on the matter.