The South Korean Navy tows a North Korean fishing boat back to the North in the East Sea, Nov. 8, 2019. (Yonhap)
“Deeply concerned,” the Washington-based Committee for Human Rights in North Korea said in a statement Nov. 7, when South Korea had deported North Koreans for the first time since the 1953 Korean War armistice.

The two North Korean fishermen were suspected of fleeing to the South on a fishing boat after killing 16 of their colleagues. South Korea’s Unification Ministry cited safety concern for the public in its decision to expell the North Koreans.

The government’s swift expulsion of the North Koreans has drawn criticism from human rights experts and groups, who say that Seoul not only failed to protect the two North Koreans despite a constitutional mandate to do so, but violated the international convention on torture.

But the Unification Ministry maintains the North Korean fishermen are not South Korean nationals governed by local laws and that the expulsion did not violate international law.

“Given our Constitution, the two deportees are South Koreans, entitled to the same rights and due process under local laws,” said Cha Jina, a Korea University professor of constitutional law, referring to Article 3 of the Constitution that stipulates the country’s territory extends to North Korea, including the adjacent islets.

“First, they didn’t become South Korean nationals since we didn’t see their sincere intentions to defect. So, local laws didn’t apply to them,” the ministry’s spokesperson told The Korea Herald. “Second, the North Koreans posed a threat to the public safety here, which led to the expulsion.” 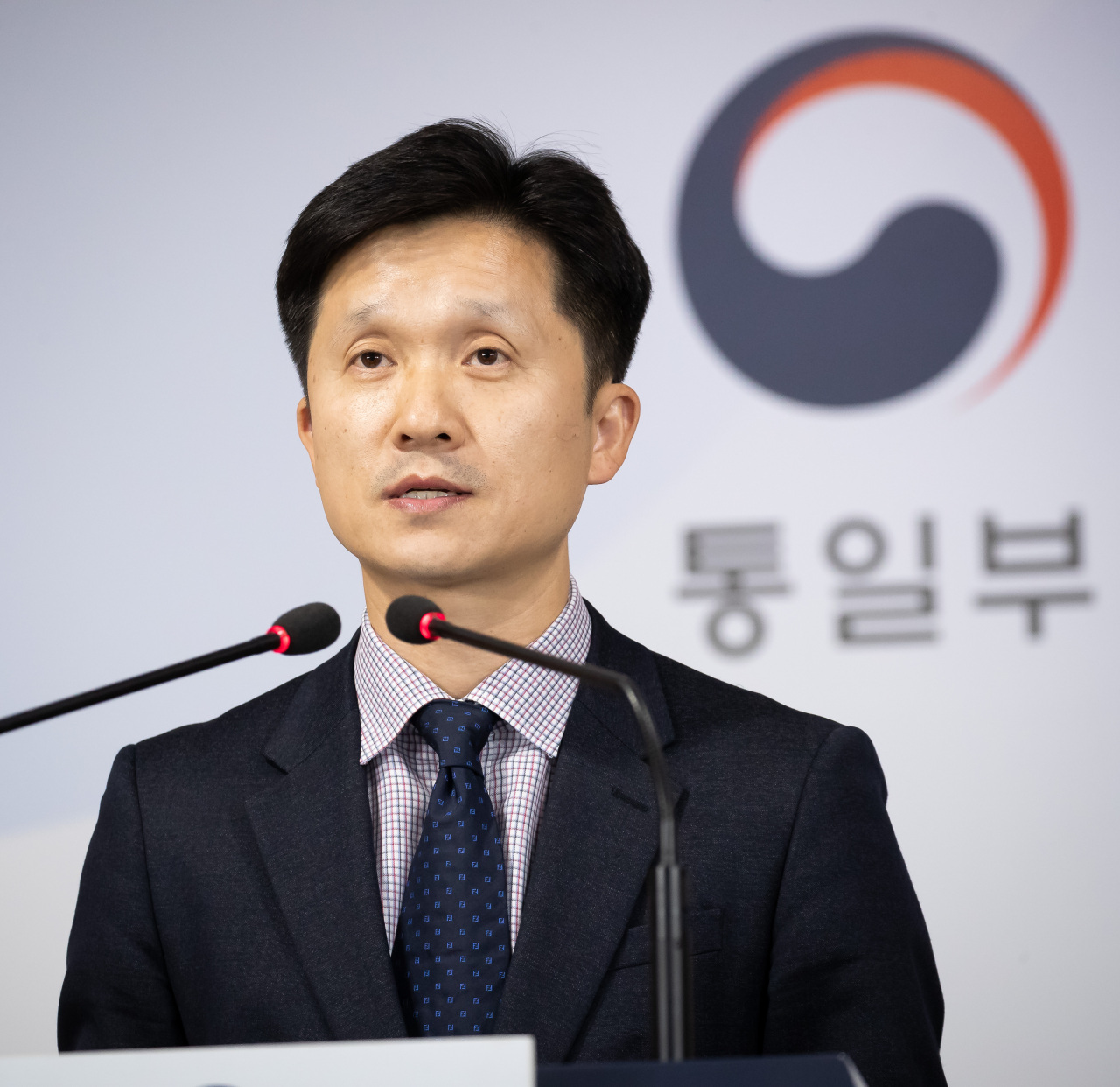 Unification Ministry spokesperson Lee Sang-min holds a press briefing on the deportation of North Korean fishermen at the Seoul Government Complex on Nov. 7, 2019. (Yonhap)
The ministry added the North Korean boat was initially fleeing from the South Korean Navy in the East Sea for two days before its seizure and that was a sign of insincere intentions.

“That’s specious,” Cha said. “If that were true, that there wasn’t actually a hint of sincerity (in their intentions) to defect, then why blindfold and handcuff them during the deportation?” The North Koreans were blindfolded and handcuffed when they were turned over to the North in the truce village of Panmunjom.

“How do we ascertain ‘sincerity’?” said Kim Sang-kyum, a professor of constitutional law at Dongguk University. “If they (the escapees) express their intention to defect, the government accepts it. We deal with problems later if there happens to be one.”

International law professor Jhe concurred, saying the government’s role is simply to confirm incoming North Koreans’ intentions to defect, rather than second-guess defection requests. Even if defector hopefuls have committed a crime, they are still South Korean nationals, he added.

Legal experts contend that the South Korean government should have protected the two escapees pursuant to Article 10 of the Constitution, which guarantees the basic rights of its people.

Meanwhile, international law expert Jhe pointed to another shortcoming in Seoul’s handling of the situation, saying, “All incoming escapees wishing to defect to South Korea should be offered a chance to file an objection to a decision from Seoul about their deportation.”

The Unification Ministry maintains that the deportation did not violate Article 3 of the United Nations Convention Against Torture, which prohibits returning people to countries where they might face torture.

The ministry refers to Article 16 of the convention, which states that its provisions are “without prejudice to any international instrument or national law” that relates to “extradition or expulsion.” The ministry, citing its intelligence and the pair’s testimony, said there was no doubt the North Korean pair committed crimes.

“The deportees were never formally indicted or convicted. So there is no room here whatsoever to invoke the extradition rule,” Jhe said. “The Unification Ministry has no power to name them criminals, let alone kick them out based on that assumption. Judges and prosecutors make that call.” 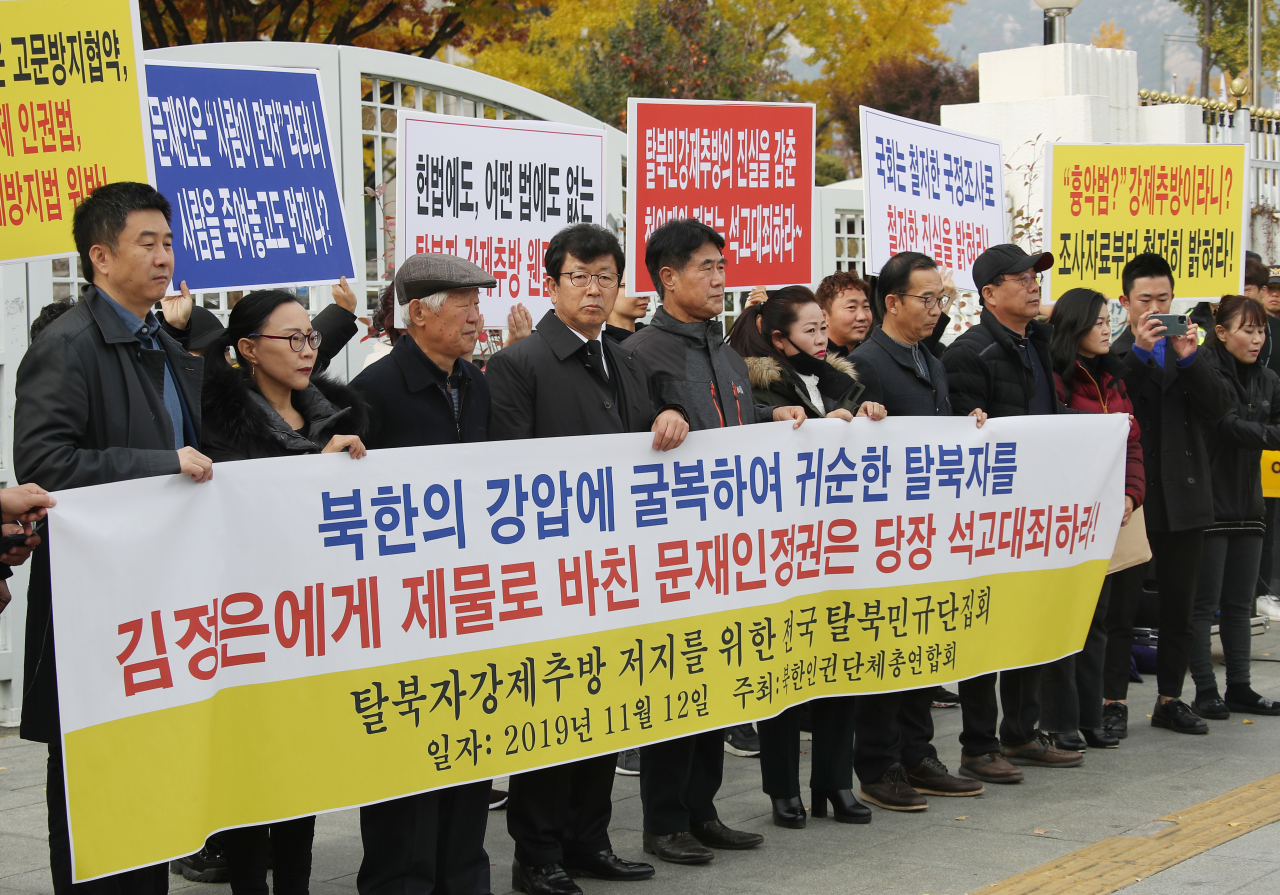 Human rights groups protest against the deportation of North Korean fishermen in front of the Seoul Government Complex on Nov. 12, 2019. (Yonhap)
“You can never assume guilt,” said Joshua Stanton, a Washington-based lawyer who served as a member of the US Army Judge Advocate General’s Corps stationed in South Korea between 1998 and 2002, according to Radio Free Asia on Nov. 7.

“Arrest them. Indict them. Give them their day in court.”

Both experts said that the Unification Ministry violated the international torture convention, with Stanton warning the ramifications of Seoul’s decision. “South Korea has now implicitly recognized that that (North Korea) is a legitimate justice system,” he said.

Other human rights organizations and members of the public have condemned the lack of transparency around the case. “The whole story doesn’t make sense,” Phil Robertson, deputy director of the Asia division of Human Rights Watch, said in a statement. He said Seoul should reveal details of the investigation.

Robert King, a former US special envoy for North Korean human rights issues, also called on Seoul to be forthcoming about the facts. “Was this thoroughly investigated before they were returned, and was the evidence sufficiently convincing that they committed these crimes?” King said in an interview with Voice of America.

Robertson from Human Rights Watch urged Seoul not to give Pyongyang “a complete free pass on human rights issues.”