The plane, presumed to be its Y-9 surveillance aircraft, first entered the KADIZ at 10:05 a.m. from an area west of Ieodo, a submerged rock south of Jeju Island, and exited the zone at 10:53 a.m. It later reentered the zone two more times before its last exit at 1:36 p.m. 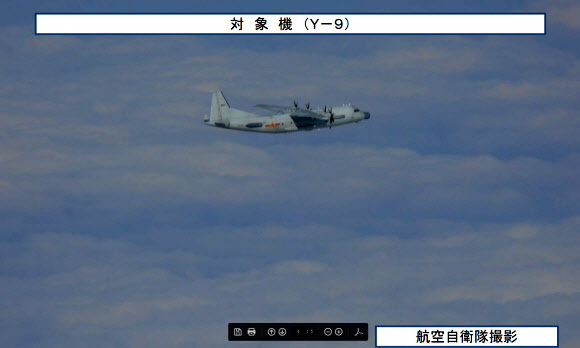 (Yonhap)
"When the Chinese military plane entered the KADIZ, there wasn't a violation of the Republic of Korea's territorial airspace," a JCS official said, referring to South Korea's official name.

"By sending our combat aircraft, our military took normal tactical steps to prepare for any accidental circumstance when it entered the zone," the official added.

The KADIZ intrusion came ahead of Chinese Foreign Minister Wang Yi's visit to Seoul next week, which is seen as a sign of Seoul-Beijing ties improving after a period of friction over the installation of a US missile defense system on the peninsula.

Chinese warplanes are known to have breached the zone more than two dozen times this year alone.

Analysts presume that foreign warplanes have intentionally breached the KADIZ to glean information about Korea's military radar frequencies needed for potential jamming operations in case of a conflict, or to test its defense readiness. (Yonhap)