Although Korea’s very first kimchi refrigerator dates back to 1984 (Gold Star, now LG Electronics, was its inventor), the market only began to take shape in the late 1990s, with the rise of apartment complexes as the norm of urban dwelling.

Traditionally, kimchi was stored in earthenware buried underground for its fermentation and preservation, but people living in apartments didn’t have backyards for their kimchi jars. So they needed something that mimicked the conditions of a clay jar buried in the ground.

Nearly two decades on, kimchi refrigerators today are much more than just a place to store kimchi. Here’s a look at this year’s product lineups from three major brands for key trends in kimchi fridges.

Electronics giant Samsung has been pushing its “Bespoke” refrigerators recently, and has added three kimchi refrigerators to the customized fridge lineup.

Bespoke is essentially a modular design that allows for 22,000 possible combinations of styles, colors and compartment sizes. It allows owners to build their own refrigerator system.

“The reason our ancestors had stored kimchi jars in the ground is to keep it at constant temperatures. The taste and texture of kimchi can change even in the slight changes in temperature,” the company said in its press release.
Kimchi Plus Bespoke maintains a constant temperature with a margin of error of plus or minus 0.3 degree Celsius, while offering different storage modes for items such as meat, fish, bananas, rice and beer or wine.

LG Electronics sticks to the basics when it comes to kimchi refrigerators: the fermentation.

Its Dios Kimchi Tok Tok refrigerators feature “a unique lactic acid option that automatically adjusts temperatures to enhance and increase the production of lactic acid bacteria that are key to fermented food,” the company explains.

It claims that the mode increases lactic acid bacteria in kimchi up to 57 times and prolongs the period when kimchi is at its best.

The model comes in nearly 40 variations of sizes, colors and door types. Nearly 30 have French doors and look like conventional refrigerators, while the rest are shaped like chests and open from the top.

The company’s core strength comes from its use of an inverter linear compressor, the company stressed, which allows more precise cooling care and enhanced energy efficiency and durability.

To prevent cool air coming out and warm air entering every time the user opens the refrigerator, Dios Kimchi Tok Tok has plastic covers for each section inside the fridge. On top of that, its 505-liter model features a new function that rapidly cools areas directly affected by door openings. 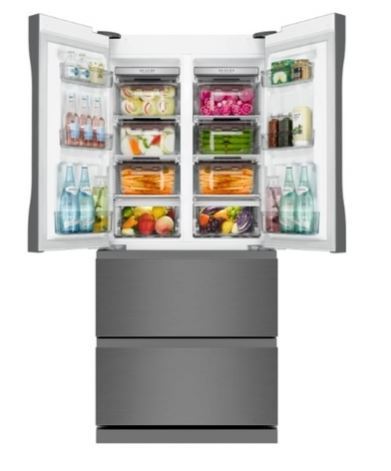 Winia Dimchae, formerly Mando Winia, created the market for kimchi refrigerators with its Dimchae brand in the late 1990s and early 2000s.

Still holding the No. 1 market share at 38 percent last year, the company is facing stiff competition from bigger electronic giants Samsung and LG, which have gained traction in the market in the past few years with their French-door, premium kimchi fridges.

To ward off competition, Dimchae refrigerators have become smarter this year, with internet of things functions. Kim Hyeog-pyo, the company’s CEO, wants to elevate the status of kimchi refrigerators as the “hub device” of the kitchen.

“We decided to roll out the models earlier than planned to preemptively respond to customer needs,” he said.

As kimchi refrigerators evolve into specialty food refrigerators with precise cooling systems to handle various other food items, Dimchae has come up with a special mode for meat, which the company explains creates the ideal storage for meat aging.